When we got to our resort on that first Friday, our room wasn't ready yet.  They took our bags and gave us wristbands so that we could go eat and walk around the resort.  We were hungry after our flight and we hadn't a real lunch yet since our flight was delayed leaving Calgary it kinda messed everything up. 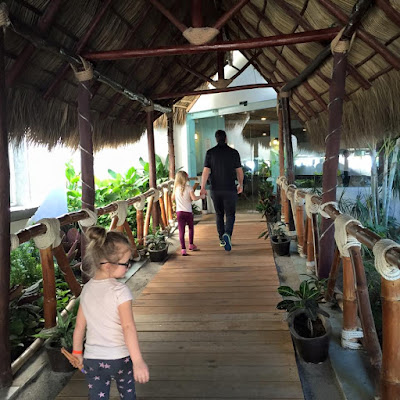 This was the entrance into Le Papaya or something like that.  This is where we ate the majority of our meals.  They had a kids section that had mostly western kid friendly foods and this where Penelope and I ate most of the time hahaha.  Just kidding, I did try some good foods at the regular buffet too.  They had a great breakfast where they had omelette and egg making stations, all kinds of pancakes, waffles, and french toast and fruit galore.  They had fresh fruit juices and smoothie stations.  It was my favourite meal of the day.  Breakfast went from 7am - 11am and it was best going before 830am.  It got really busy after that and you had to wait in line to get in.  Lunch was from 1 - 4 and that was ok if you ate a late breakfast, unlike us.  This was pretty good and there was always some kind of taco and fajita station that was pretty good.  Plus they had a pasta section and a deli section.  And they had ice cream for dessert too.  There was a snack station that was out towards the beach that opened at noon until 6 and they had nachos, french fries, deep fried sweet potato puffs, deep fried tacos, hot dogs, salad and freshly barbecued hamburgers.  The burgers were good but Greg said the cheese wasn't so much.  The fries and nachos were great for snacking throughout the day.  Supper was from 6pm until I actually I have no idea.  10 or 11 I think.  With exception of our first night there, we ate supper right around 6 and it wasn't too busy.  Supper had lots of fish, Mexican food, pasta stations, fish on the on-demand stations, sushi on a couple of nights.  It was a really great variety of food each night.  Greg was very adventurous, Finley was surprisingly adventurous, I was a little adventurous and Penelope was zero adventurous.  She literally ate the same thing every day and didn't complain once. They have staff in the buffet area that get your drinks, clear your plates and they are all fantastic.  Juan was my favourite and he even made the girls origami cranes one morning.  Another time, Penelope dropped her plate and her lunch fell everywhere she was so upset, by the time she got back to our table and we were going to get her a new plate, one of the guys had already gotten a plate full of the same stuff she had waiting for us.  It was that amazing.  At the end of the day, it was still resort food but it was way better then any resort food I have had previously. 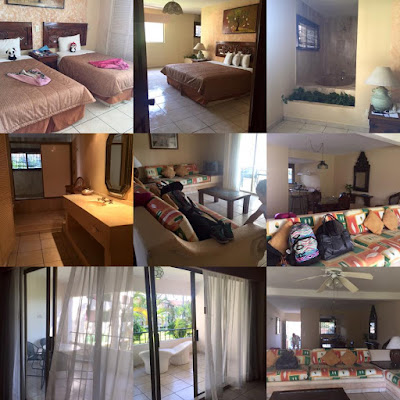 This is a collage of our room.  It was insane.  We are not sure how we ended up with a suite like this but we were not complaining.  All we asked for was at least 2 beds but we got so much more.  It was gigantic, and without a bit of exaggeration, it was almost double the size of mine and Greg's first place together.  We had 2 bedrooms, 2 bathrooms, a gigantic soaker tub in the master bath that you could access from our room or the bathroom that was behind us.  The second bedroom had 2 beds so the girls didn't have to sleep together.  We had a huge living room area, dining room and a kitchenette where the fridge was stocked daily with 5 water bottles, 3 pop and 2 beer.  We had a desk area where Finley did her homework and a huge balcony with 2 seating areas.  Greg was worried he might have agreed to some kinda upgrade when we checked in and we would be billed for it but they never did.  The wifi was $15 a night which is excessive but Greg had to have it because work was busy and he needed to be able to check it throughout the day.  For some reason + we are not sure why either but they gave us enough prepaid codes for the whole week for free!  They were so awesome.

Our rooms were cleaned daily and spectacularly.  Occasionally we would go back to our room when they were cleaning it and they did a thorough job.  They even put the girls dolls back on their beds and made their blankets into a little ducks.  They were so awesome!!! 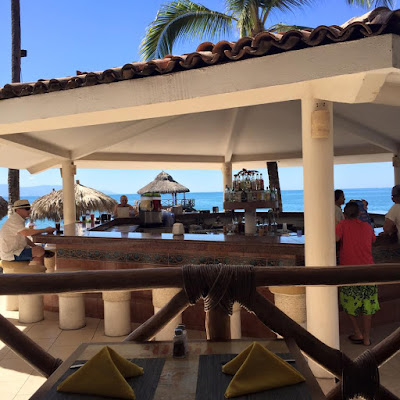 When we sat outside at the buffet place for our meals this what you got to see.  It was great aside from the pigeons who were trying to steal our food.  They were a little crazy.  The bar in front is the beach bar and i think it is open until 11pm.  If you wanted a stiff drink this where you came.  They put 2-3x more rum in your drink then any of the other bars.  To the right of this was the beach snack area that I mentioned earlier with burgers and fries and such. 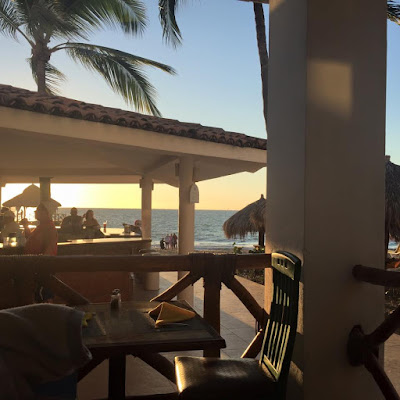 The view at supper time from the buffet place.  It was so awesome. 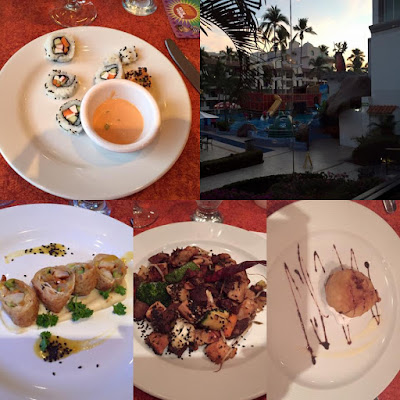 The resort has 3 restaurants on the grounds but you need reservations to get in and they start taking the reservations the day before you want to go at 8am.  Our first experience was at the Japanese restaurant.  The sushi was a little dry and I accidentally thought that the orange stuff was spicy sushi sauce but it was 1000 islands salad dressing hahahah.  They had a all you can eat salad and sushi bar once you ordered.  I had the vietnemese shrimp rolls and they were pretty good.  Greg had calamari and miso soup and he said they were amazing.  We both had the tempenyaki.  You could chicken, beef, shrimp or combination of all 3.  I normally always do shrimp but for some reason I did combination as did Greg.  The shrimp was really good and so were the vegetables but the chicken and beef had good flavor but were a bit on the dry side.  For dessert, we had tempera ice cream which had a light tempura batter and then deep fried.  It was so delicious.  Overall the meal was great, the servers were awesome and we recommend if you do go this resort that you eat here. 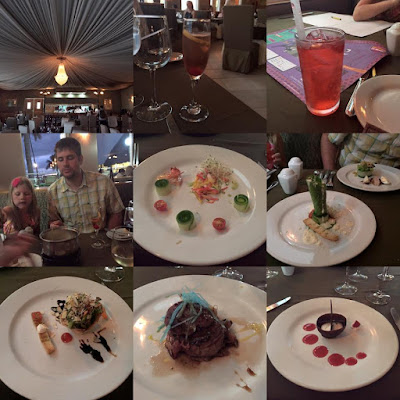 My absolute favourite place to eat there was definitely the french restaurant.  Every single thing about it was amazing and delicious.  There was like 5 courses and so so so so good.  I skipped the soup course but Greg did not.  I think the most amazing thing they did was my steak.  In the menu it was  a blue cheese crusted steak.  I have come to enjoy goat cheese but i do not like blue cheese and yes i have tasted it.  So I asked our waiter how much of it was crusted and he asked if i didn't like cheese and that they would make it without it.  Not only did they make it without the cheese crust, they basically reinvented the steak for me and wrapped it with bacon and put sautéed mushrooms on top.  It was literally the best meal I have had in such a long time.  The whole meal was perfection.  The shrimp appetizer, the the organic and goat cheese salad with an amazing sweet homemade dressing and chocolate mousse in a bowl made out of melted chocolate!!!  If you come to this resort and don't eat  here, you are seriously selling yourself short of a spectacular meal.

There was a third restaurant on the resort that was Italian.  I went to bed early but greg and the girls went.  Greg enjoyed his, penelope hated it and had jam sandwiches from the buffet on the way home and finley ate part of her pizza.

As you can tell we were very happy with our accommodations and food at Crown Paradise.  We are typically easy to please and easy going people but I think even you are not, you would still be happy. There were some bad reviews that popped up after we booked but they were definitely unfounded. Everything was so clean and the food was really good considering you were still on a resort.  Staff was great and friendly too.