We got  Penelope's blood done this week.  We tried for the first time on Tuesday at South Calgary and it did not go well.  I pumped her up with a new beanie boo named Sophie who was going help her not be scared and then I bribed her with ice cream at marble slab.  But I forgot the Emla cream and she was not happy.  We didn't have time to go home to get it either.  She lost her mind the first time and she went to get the "child" specialist who came from ACH.  I was happy with this because he did it on her last time successfully.  However, he did not work well with her.  I was actually really unhappy with him.  It was clear that Penelope was not happy about getting a needle and was clearly freaking out but instead of being calm with her, he was frustrated, aggressive and not the least bit patient.  I was extremely mad at  him and frustrated with Penelope so we left.  I have been told that the lab at the ACH is really good and so I thought I would take her there.  However,  it is really far from our house and they don't take appointments and the Country 105 radiothon was on Wednesday to Friday so it would be a zoo.  We have a follow up appointment on Tuesday and I really didn't want to move that, so on Wednesday just before I picked her up from kindergarten, I went online to see what appointments were available anytime at Avenida Village.  We lucked out with an appointment at 11:50 or next week.  So I picked up Penelope from school and we walked home and I explained to her that we were going to try get her needles again from a different place.  She was scared but this time I remembered to use the Emla cream and I think that helped.  We drove to the place and they had a little play area and soon we were called in.  The lady was really awesome and she went to get another technician who was equally awesome and even though Penelope was freaking out a little they still managed to get the blood out of her and they gave her stickers and were giving her high 5's for being so brave.  It was a really positive experience for her and I am very grateful for this!  We left the lab and headed right for Marble Slab where she had a chocolate cotton candy ice cream with oreo and sprinkle mixing and then went home for lunch.  A little backwards but sometimes great days call for ice cream for lunch and grilled cheese for dessert.  Now to get her to pee in a cup and poop on a plate.......Here are some photos for our 2 day adventures to get blood 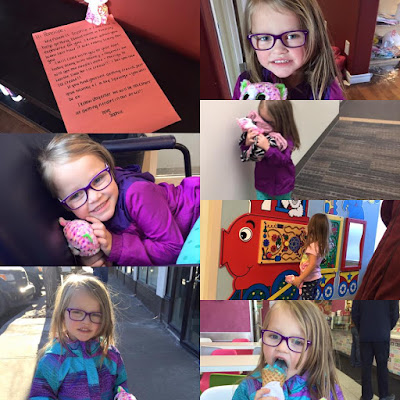 I have a friend who works at the ACH who helped us out for getting her to go pee and I am forever grateful for that.  We weren't able to get her to poop on a plate though.

We went back to the doctor yesterday and all the results came back positive which is what we wanted.  It just basically means she most likely has IBS but there is no real treatment for it.  She has the liquid immodium medicine that she can take if the stomach pain is too much for her or if we see an increase in bowel movements.  And I am going to keep a diary to track her bowel movements and what she eats to see if I can find a definite correlation and just eliminate it from her (and our) diet.  We got back in another month to get her looked at again just in case.


at February 10, 2016
Email ThisBlogThis!Share to TwitterShare to FacebookShare to Pinterest
Labels: Penelope