Last January, I ran too fast too soon after slacking during the winter and destroyed my right it band.  Everything I injure while running is on my right side, it's kinda crazy how much weaker that side of my body is.  I spent a long time in physio at the Running Injury Clinic located here in Calgary at Glenmore Landing.  I did all the exercises and spent (and still do) hours rolling out my it band and quads on my roller.  But no matter what I did, nothing took away from my knee pain (which was a result of a tight it band).  My friend Shannon suggested a knee compression wrap so I went to the Running Room and bought one.  I tried it out and ran with it and it didn't help much at all.  So I went back and returned it and bought the it band compression wrap instead.  It worked.  It was amazing.  That was last summer sometime, I don't remember exactly but it has been a game changer. 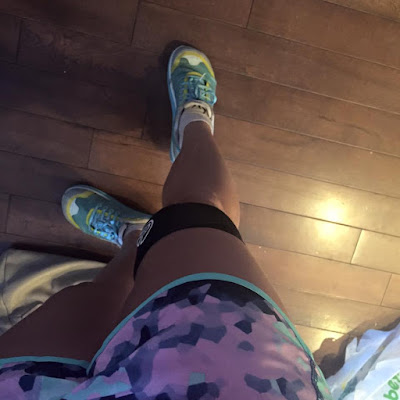 The wrap velcros right above your knee and provides targeted compression, stabilizing the it tract and it absorbs stress to the area and reduces friction and rubbing of the femoral condyle (you can find more information here).

My it band rarely bothers me anymore and I can feel it tighten up almost immediately if I have neglected to roll for awhile so I know to shut down my run and go home and roll and I am fine.  This rarely happens.  So twice I have tried running without it.  Once last fall and once a few weeks ago. Neither time was a success and actually set me back in my running because it made my knee hurt.  So even though I no longer suffer from IT Band problems, the compression wrap holds all the right things together allowing me to run my best runs.  So as much as I hate wearing it, it looks like I will be wearing it for the rest of my running days.  If only if I could find it in pink.  That would make me somewhat more happier :)