Penelope has wanted a loft bed since the moment she discovered it at IKEA one afternoon.  She talked about it all of the time and she made us go look at it every time we went to the store.  It wasn't that we didn't want to buy it for her, we did, we just didn't want to pay full price for it.  I hate paying full price for anything, let alone brand new.  Anyways, I found one on the buy n sell auction site and ended up winning it for $30.  It's like regularly $200 or something like that.  When we told Penelope she was getting one that night, she was beyond excited.  Like insanely excited, she said we were the best parents ever, which is a nice change from being the rudest parents ever when she doesn't get her way.  Can you believe she is only 5??  We told her the heart would be covered but she didn't care.  Nobody seemed to care but me!! 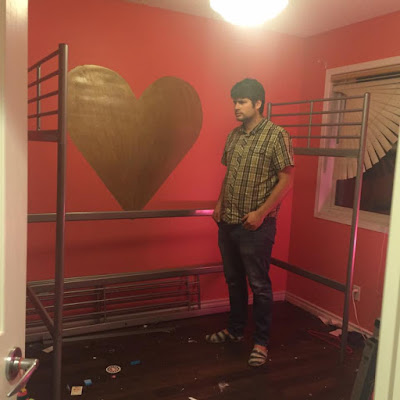 Greg went and picked up the bed on a Friday night while Penelope anxiously waited for him to arrive home.  He messed up a few times putting things together backwards and what not but soon he was finished.  Penelope helped take her old bed apart and her new bed together.  My kids will be able to build IKEA furniture on their own before I can hahahaha. 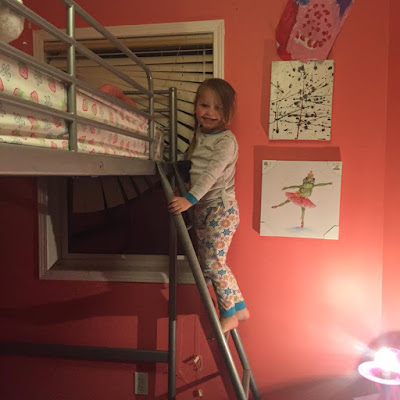 She was so excited to climb up her ladder to her new bed.  Her and Greg had the safety chat about always having 3 on the ladder - 2 hands, one foot or 1 hand and 2 feet.  I had no idea that this was even a thing.  My sister and I had bunk beds for awhile and I don't remember that.  We also had to tell her that she couldn't jump off her bed or her ladder. 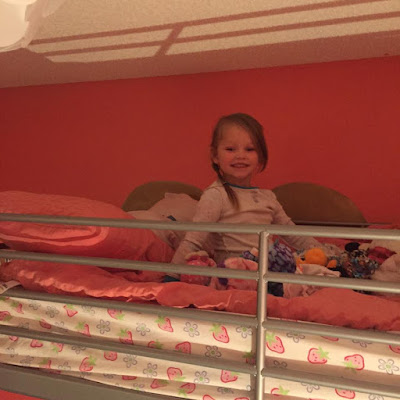 Here she is in bed ready to go to sleep for the first time way up there.  We had to take away some of her dolls that she had up there because we worried that she would sleep on top of them and be above the railing and roll off.  Interestingly enough, Greg is terrified of heights and I am not.  I have no problems standing on an edge of a mountain and taking photos and videos of what is below me but for some reason, I was seriously stressed out about her sleeping up there.  Thankfully it only lasted one night and I now have no problems with her way up there. 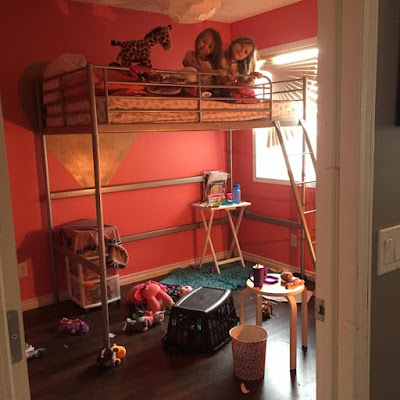 Finley couldn't wait for morning so she could go play with her sister's bed.  They played pirate ship and made big messes.  Finley now wants of these for her own hahaha. 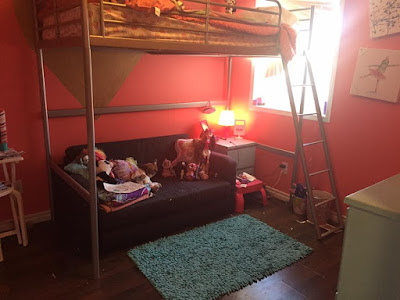 About a year ago, I went and sold all of our furniture in our basement and main floor.  We needed something to use as a temporary couch/bed for when my sister visited so we bought this couch that was originally from IKEA off of kijiji.  It was pretty tiny and we soon realized that this was not going to do for when our family visited so we bought another IKEA hide a bed off of kijiji and just had both downstairs in the basement.  Greg suggested that we move it upstairs to put under Penelope's bed so she had a place to sit and get dressed since it was hard to do so from her bed now.  So we brought it up and she now charges you $1 if you want to sit on her couch haha. 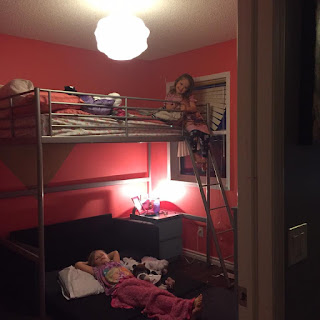 And of course, once the girls realized that there was a bed underneath, it meant sleepovers.  They have never had a successful sleepover at home ever.  Even when we are out of town and are forced to sleep together it does not go well.  However, when we were in Mexico in January, our suite had 2 bedrooms and the one bedroom had 2 beds and they slept relatively well in there so maybe they are growing up.  It took them about an hour to fall asleep after we tucked them in but they behaved relatively well all things considering. 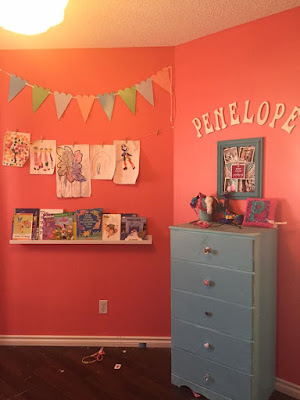 We (meaning me) think we will paint a large gold heart above her book shelf and move her art work to above her couch under her bed.  I really miss the gold heart and need it back somewhere. 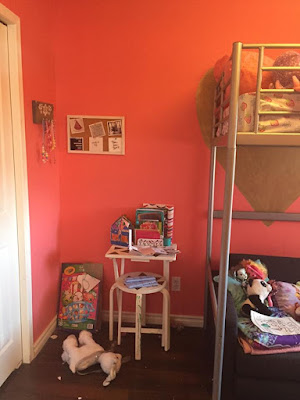 And here is her desk and her necklaces - 2 of the most important thing in her life. 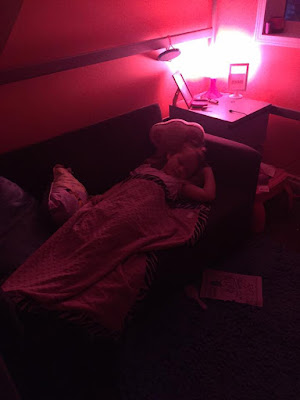 And occasionally, we find her on the couch because why not???

at March 19, 2016
Email ThisBlogThis!Share to TwitterShare to FacebookShare to Pinterest
Labels: New To Us, Penelope