1. On Tuesday morning, Greg's company did some layoffs. Thankfully Greg wasn't one of them. They lost 20% of their staff, including 3 from his group. 30% had their hours reduced from 5 days a week to 3 days. This budget is approved until the end of the year which is good. His company needs oil to maintain at $45/barrel to be sustainable so keep your fingers crossed it rebounds and levels off. Not just for us but for the 20,000 Calgarians who have lost their job in the last 15 months.  Super quick shout out to my friends and family who were such a great support system leading up to this.  All the messages both before and after were encouraging and supportive.  We are so lucky to have such great people in our lives.  We love you all.

2. Speaking of SNL, Peter Dinklage hosted last weekend and he was amazing. His sketch Space Pants was probably one of the greatest ever. It was brilliant. He was so good on that episode. Gwen Stefani was the musical guest and I am now obsessed with her song Make Me Like You.

Here is a link to the Space Pants Skit.  It's hard to find a solid video on  youtube because SNL only allows US viewers on their youtube page but it's still worth the watch: Space Pants

And here is the video for Make Me Like You by Gwen Stefani.  I had no idea they even made videos anymore but it appears they do.

3.  Last year Lululemon came out with the pistachio coloured  CRB which is my most favourite tank and the only one I wear for all activities.  It was so popular that it sold out immediately both online and in stores and I was left empty handed.  And since then it hasn't popped up on any of my local boards at all which is quite rare.  But on Tuesday (which is when new stuff comes up on their app; new stuff appears in stores on Tuesdays and Fridays at the Southcenre location) I was on the app just after upload and it was there.  I was so excited that I bought it immediately which was a nice treat given the stressful 2.5 weeks that I have had.  It arrived this morning and I am so in love it.  It's strange because I am not a huge fan of green but I just love it so much. 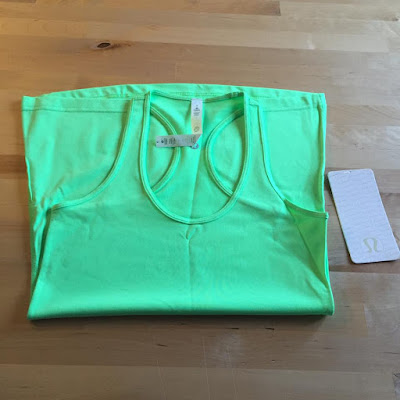 4.  I have been obsessed with plant terrariums for months.  I have loved them from afar and on pinterest and longed for one of my own.  However, I just never pulled the trigger but for some reason I caved and bought one on March 20th and it is still alive.  You basically just need to spray it every week or so and it survives.  I actually forgot to spray it until I was at IKEA on Tuesday and saw a spray bottle so I bought it and sprayed it that day.  It is shockingly still alive.  It's nothing fancy but I am very happy with it: 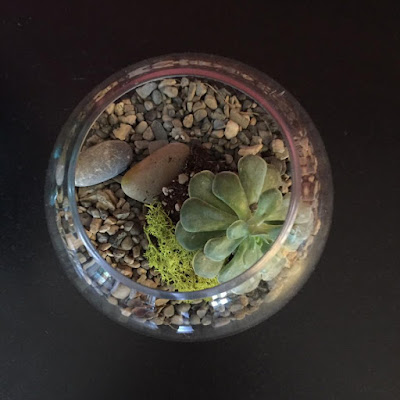 5.  So I am a short person and I have a very tough time finding crops that fit me properly.  Most are like pants on me or pants that shrunk and I look ridiculous.  So I was at Walmart and I saw that for $7 you can buy leggings and cut them at the set out lines on the pant to make them the right size for you.  I thought this was brilliant.  Until I got home and cut them.  I am not a seamstress or anything like that.  I can't even cut a straight line even if it is measured out.  I thought it was going to be easy but it wasn't.  It took forever for my scissors to cut it, it wasn't straight and it looks like I cut it so there is no nice seam or anything like that (which really makes sense after the fact) and I cut them a bit too short.  Thankfully they were only $7 and will be good for backyard play and camping.  Lesson learned - don't ever try to hem your own pants or crops hahaha.