Last Sunday I decided to do my long run at South Glenmore Park instead of my usual Fish Creek Provincial Park.  I run 2 - 3x per week there and do the same routes on Tuesdays, Fridays and Sundays and I was desperate for a change of scenery.  I thought it was a good idea since I have a race here at the end of April and I haven't ran here since the same race last year.  However, I had forgotten how hilly it was.  I don't remember it being like that last year but then I remembered I had just ran a half marathon in San Francisco and perhaps this just seemed to be flat compared to that hahaha. 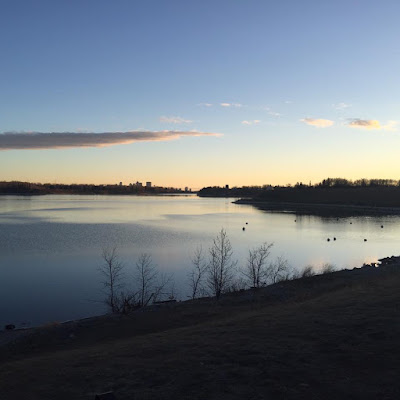 This is right near where I started and I had to take a photo.  It was perfect with the sun rising, the large body of water and the views of downtown.  Such a nice change of pace from my usual Sunday route. 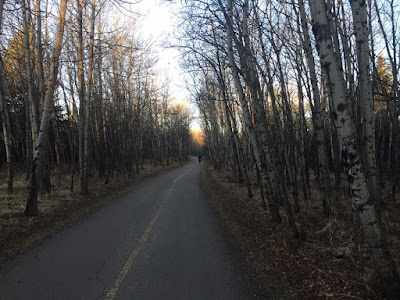 I think this was my favourite part of the run probably because it was super flat and very tranquil at least until 2 deer came running out of the trees and scared the crap out of both of us.  But it was a beautiful start to a run.  I wasn't feeling as tranquil when I had to run back this way since I got lost or not really lost but almost lost had I not turned around.  I had originally intended to turn around at the 7km mark so I could run my 14km.  But then I thought to myself I should just do the loop that the race is run on since it is 15km and what's the extra km right? Well, I forgot that as of right now there is not connector through the park, you have to detour through the residential areas to get back to the park on the other side of the North Glenmore Park Canoe Club.  Apparently there is a planned proposal to build a pathway connecting it in 2017 but nothing as of yet.  The problem was I couldn't remember the route we took and where I was did not look familiar to me and this was at 7.95km mark.  I could see Heritage Park and knew if I got there I could make the loop so I opened up Apple Maps on my iPhone and searched the walking route from there to Heritage Park and it told me 11km which I knew was not the case. However, I had no intentions of pressing my luck and trying to find my way there so I turned back which I also did not want to do.  There were a lot of hills I now had to go up and down and I didn't want to do that at all but I really what choice did I have??  So I turned around and suffered through the last half of my run.  I was not happy. I was mad, grouchy, angry and sore. I had severe bloating and painful cramps and was mentally struggling with this run.  I ran a great first half of the run but really struggled with it on the way back and I ended up doing more walking then running (I think) and at the 15km mark I officially stopped my watch and walked the last km back to my car. 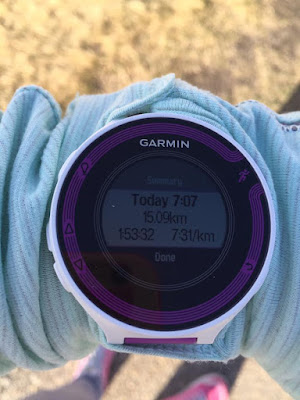 This was my time on Sunday morning.  It definitely wasn't great.  I know Sundays are supposed to be my long slow distance run but I struggle with running slowly even though both Greg + Shannon have told me that this prevents injuries.  I was disappointed with everything and so I used my Starbucks reward on the app on my iPhone and bought myself a chai latte on my way home.  I was also really cold and needed to somehow warm up quickly.  I got home and complained immensely to Greg about how terrible my run was and everything went wrong and I suck at running and I no longer like it and no longer want to torture myself by running like I do.  He just laughed at me and told me that this was good for me to experience.  He did bring up the fact that this was the longest run I have had in a long time (I have been running consistently but have been having trouble getting past the 10km mark until about 2 weeks ago) and that it is beneficial to struggle in runs to make me do better next time round.  And besides he said I have invested way too much in this to turn back now.  I stayed mad at myself for the rest of the day and started Monday with a brand new attitude and some crazy sore hamstrings but more on that later.

The moral of the story is that a tough run is better then no run at all and I need to put it behind me and do better next run out (which I did btw) and just keep on improving going forward.  Easier said then done for sure on some occasions but for your mental being you just gotta.