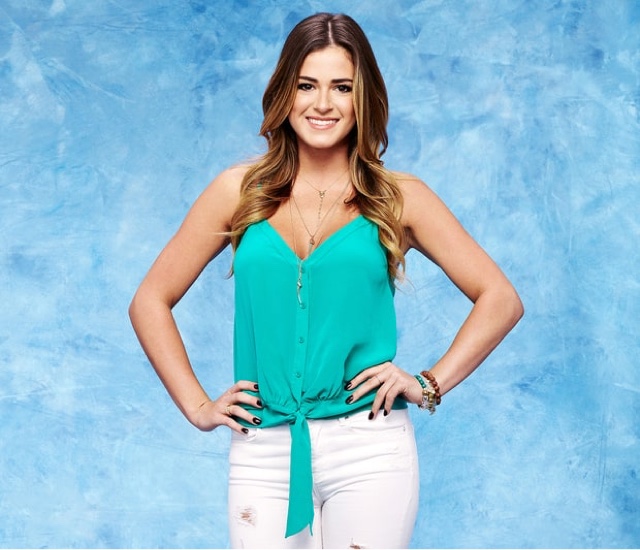 I decided to watch The Bachelorette for the first time. Well that's not true, I watched it briefly when Emily Maynard was on it because of her connections to the NASCAR world but I never finished either season she was on. And then I briefly watched one summer thing they had with multiple guys and girls but I never finished the first episode although there was one contestant on there named Tenley and I wanted to name Penelope that but Greg vetoed it. I plan on watching it every Monday night and then blogging about it on Tuesday. We shall see how it goes!!

25 guys are here to steal her heart and be made her groom but before we meet them we are shown JoJo meeting up with the other bachelorette's. I have no idea who any of them but I am sure I would recognize their names from reading headlines on gossip columns. I don't really understand why anybody would want to be on this show as the main person or be any of the 25 contestants. Why would you want your future partner hooking up with a different person each night or be the person doing all the hooking up. Maybe I am just old but to me it kinda seems lame.

We get to meet some of the guys now before she does. Jordan Rodgers is pretty hot and his brother is Aaron who is the quarterback of the Green Bay Packers and is engaged to Olivia Munn. So far he's my leading bachelor.  He looks just like his brother too.  I thought that this would entice Greg to want to watch it with me but he still refused. I don't think I like Superfan at all. Is he in it for real or is it just part of him winning his bachelor pool??

Finally the guys arrive!!! And her dress she is wearing to meet them is on point. I love it. All the boys did too. She met Jordan first, maybe it's a sign he's the one!!!! Derek also looks like a solid dude. Cute too.   Robbie seems like a tool.  Kinda cool that there is a Canadian on there but didn't know that being Canadian was a profession???  Daniel might be my second choice if Jordan doesn't make it. Santa?? Who wants to date Santa??  I don't like any of the guys who come out with gifts, gimmicks + costumes. So freaking lame. Shave it for later??  Kill me now. You are going home tonight!! Blue balls???  It's just getting worse and worse. Hipster Brandon could be an intriguing character. Perhaps my third choice. On horseback?? Oh wait he turned it into a unicorn.  I might not make it to the second show!! There must be some connection to unicorns from when she was on The Bachelor. And that includes the introduction of all the bachelors.

Now we get to go inside with her and all of them. But first a commercial. Oh the suspense.  I just noticed that it's on for 2 hours. Is it on for 2 hours every Monday? Not sure I can commit to that!!

She is ready to fall in love and encourages the guys to be open hearted. Not sure if open hearted is what I would have chosen to say but that's just me. Alex is a tool and pulled her away first. And then did push ups in front of her. So cheesy. The other dudes are right, he's an idiot. He's going home soon. Still loving Jordan!!! The connection is definitely there. JoJo really makes me giggle especially after her kiss with him. She is definitely very likeable. I find it boring to watch when the boys are boring and i don't like them. Nice Damn Daniel reference hahaha but she had no idea what he was talking about. Dudes are getting wasted especially fellow Canadian Daniel haha. Poking in the belly button is not a Canadian greeting by the way. His tie is lame too. He's no longer my #2 - Canadian or not. He's naked now. OMG. And he jumped into the pool. Seriously what a embarrassment to Canada. Trust me, we are not that weird!!!!!

And I just searched my guide and it is on for 2 hours each Monday! I was hoping it was just tonight!! I have boot camp Monday nights so at least I can fast forward thru the commercials when I get home.

That dude's piano skills are on point. Not sure his name but unreal. She's not loving the drunk guys but is willing to do what she's gotta do haha. Santa's name is Nick......St. Nick.

I hope Jordan gets the first impression rose. Does that mean they are safe from being sent home??? I guess I should find out soon. I can guarantee the super wasted dudes aren't getting it haha. Uh oh Luke brought her cowboy boots and is also from Texas so he might get that first impression rose.

I love how she asks all the good guys why they are here. It's like she's surprised they need this show to find true love which is ironic because she's the one trying to find it too. We all know why most of the dudes are on this show....

She came and grabbed the rose!!  Oh the suspense of who it will be. My bet is Jordan or  Luke. Luke might now be my #2 guy after Daniel's behaviour tonight.  Yay!!! She loves Jordan as much as I do!!! Woohoo!!! Team Jordan for the win!!!  Of course he accepts the rose, has anybody not???? Uh oh, Jordan already has a room full of haters. So much jealousy. And probably bad cologne.

Time for JoJo to deliberate. Who's gonna go home? The obvious choice is Daniel but we will see...

Who's this guy???? Why is he here?? So much drama and I know nothing since I don't ever watch this show!  And of course there's a commercial. But at least it was a preview for the new Bridget Jones movie which might be good.

Apparently he is Jake Pavalka and is a former bachelor. The name sounds very familiar to me. Outside of Super Fan, how do they all know who he is??  But even more importantly, why is here?  He's like a brother to her but even she is surprised to see him. I think he might have been on one of the bachelor/ette shows I started to watch.  I think he is a pilot or something. Now that I think about it he was on DWTS a few seasons back when I watched it. He wanted to wish her luck. That is super lame. How much more cheesy can this show get????  Get back to the elimination none of this other crap.

Daniel got a rose! I figured it was too obvious for him to go.  Peter, Jonathan + a third guy were sent home and they were gutted.

Now to wait until next week's episode....

at May 24, 2016
Email ThisBlogThis!Share to TwitterShare to FacebookShare to Pinterest
Labels: The Bachelorette