On Thursday, Finley and Penelope started outdoor soccer and for the first time ever, they are both on the same team! We bumped Penelope up to U8 since she wasn't being challenged enough in U6 and can learn more playing developmental then another year of recreational. 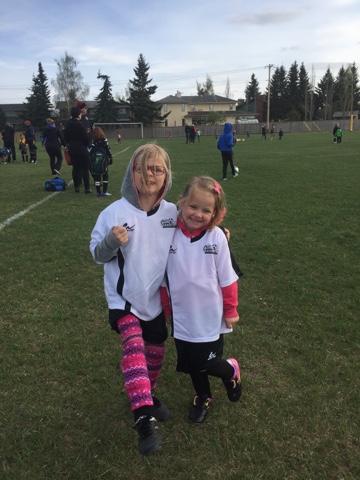 Unlike recreational soccer, you don't get to pick your soccer name.  We are pre named the U8 Girls Dynamo's.  We thought the girls might get upset but I don't even think they have realized it yet.  Finley is number 11 and Penelope is number 2. 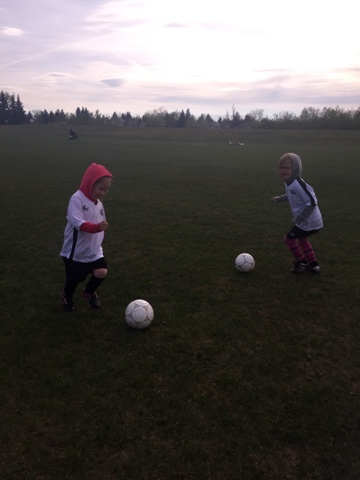 Playing around with a soccer ball while we waited for the other kids to show up.  We have 8 kids on our team and all 8 kids show up.  All the players are girls on their team and I don't think either will play with boys again.  There are only 4 girls teams in U8 and 9 boys teams.   This number doesn't surprise me too much since there are so few girls playing soccer.  Most of the time, they only have 1 or 2 girls per team.  Although Finley's last indoor season, they had 5 or 6 girls which is virtually unheard of. 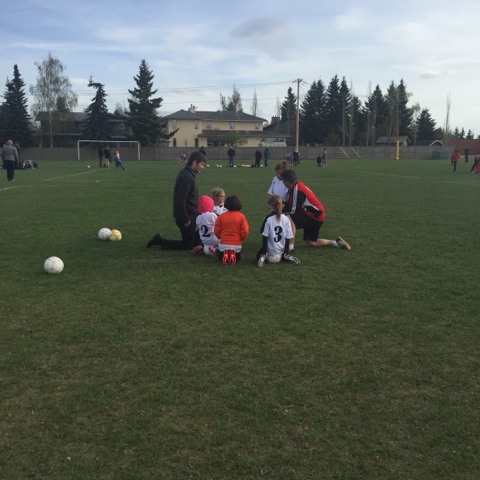 We have games on Tuesday nights and practices on Thursday nights and had technical training on Saturday mornings - until they changed it after the first week.  Instead of being at 9am on Saturdayts and freeing up the rest of your weekend, it's not at 1230 which really, really sucks.

This first day though was getting uniforms, meeting each other and then they did some practicing.  I don't know if it's normal to have a practice day and a technical training day or if it's being done because there are only 4 girls teams.

They did some drills for the first half and Penelope was grouchy and not participating much.  That may have been my fault though.  She had the ball in her hands and I went to kick it out of her hands and it hit her in the face.  She lost her mind and rightfully so.  It was also really cold with the wind and she hates cold weather.  When they played a 4 on 3 soccer game, she got much happier.  She is shorter and slower then the other girls on her team but her skill level is definitely there and people were already surprised that she was only 5 years old.  It will be interesting to see how Finley matches up against the other girls since she has almost predominantly played against boys.

We had our first game this past Tuesday and both girls did really well.  All girls turned out and we cycled through pretty well.  It was so hot though so we did call a half time so that the girls could rest and get some more fluids in them.  We also had misters to cool them down and the coach brought his cooler with popsicles in it for after the game which was much appreciated by the girls. 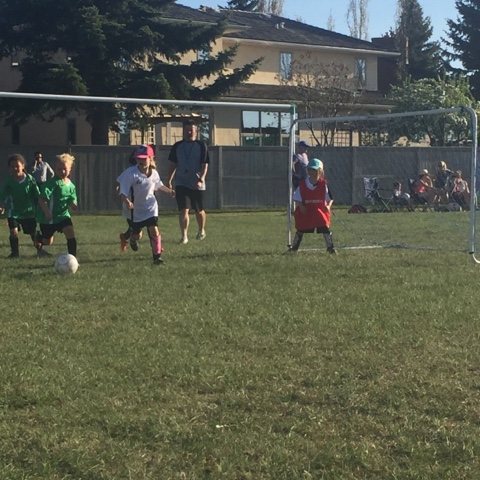 Penelope was the sweeper twice and she stopped some hard balls.  This kid doesn't seem to have any fear when it comes to stopping the ball which is good.  This is the first time she ever played goal or played a game in which there was a goalie since they don't have that in U6 and below. 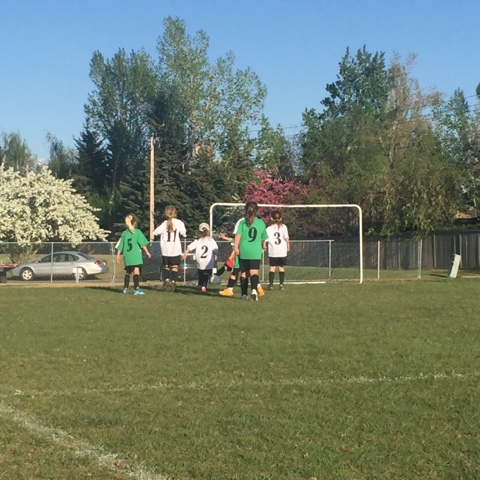 They did have a few shifts together and Penelope did some great passing and some very blocking which is also new to her this season.  Finley scored her first goal of the season too.  Penelope just needs to get a little quicker and she will be right up there with the older kids.
at May 05, 2016
Email ThisBlogThis!Share to TwitterShare to FacebookShare to Pinterest
Labels: Calgary, Finley, Penelope, Soccer, YYC