1. On Sunday morning, Penelope declared it Rainbow Taco's birthday.  She wanted taco's for supper because it was her favourite food and asked that we go buy her a cake.  Penelope and Rainbow Taco picked out the heart shaped one below.  We put in 7 candles because she was apparently turning 7 and we sang happy birthday to her too.  Rainbow Taco is a stuffed Shopkin, which Penelope is extremely obsessed with, although it's actually an eclair who's name is Rainbow Brite.  I know it probably seems silly to most people to do all of this for a stuffed doll but she was really excited about it and really they are only kids for such a short time so why not make the most of it?? 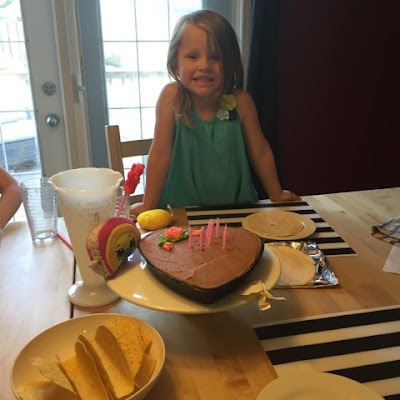 2.  We have this tree in our front yard.  It is pretty for about 2 or 3 weeks a year and then usually looks dead.  It leans toward one side thanks to the massive September snow storm we had a few years back and was the only tree of its kind to survive Snowtember (much to my dismay).  Why can't it just stay pretty like this from April to November?? 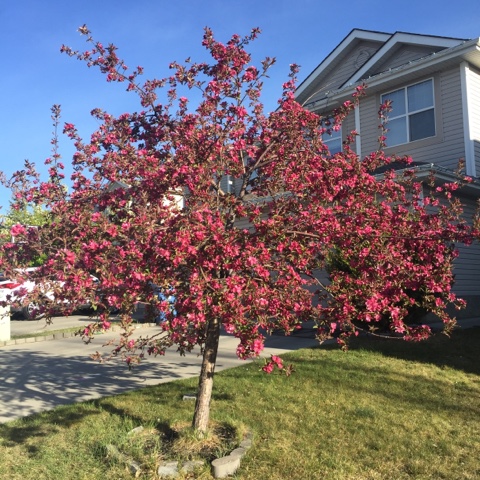 3. Years ago the handle on this window broke off and it sat shut for way too many summers.  I had just assumed that you had to replace the whole window/door and I had no intention of doing that just so I could open it.  However, I was at Home Depot on Monday and randomly walked down a aisle looking for something and found handles that are meant to replace broken ones like mine.  So I bought it and took it home and switched it out in like less then 5 minutes.  It is fantastic to have a window that opens now and I am irritated at myself that I spent 5 or 6 years with it broken.  Greg says he told me that it was an easy fix but i have no recollection of this at all. 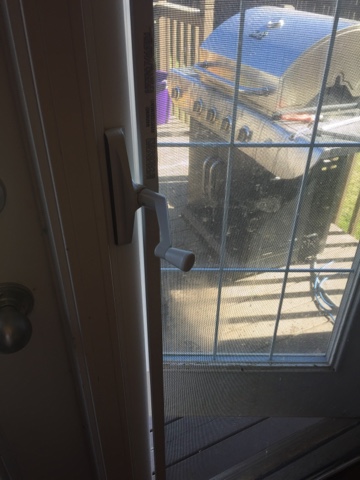 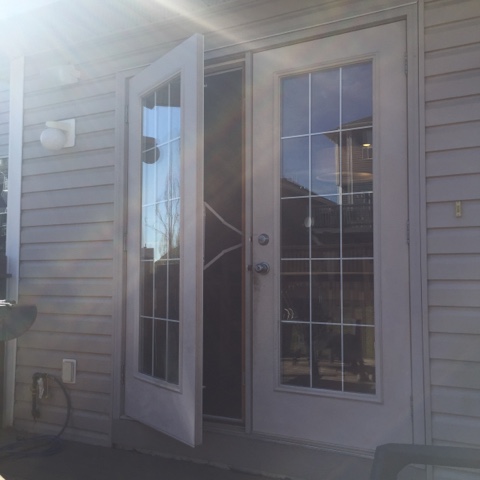 The window is opened!!!!

4.  The weather has been really hot this last week and has been unseasonably warm since towards the end of January.  No snow or rain has led to some really dry conditions which has led to an insane forest fire in Fort McMurray that has devastated an entire community.  It has been the largest fire evacuation in the history of Alberta which is incredible.  I don't understand why they don't do prescribed burns in these forests to prevent massive wild fires like this from happening.  The national parks do this and they never seem to have problems like this.  Anyways, the fire spread so quickly that most residents only had like 5 minutes to leave and it led to a conversation between myself and a friend of what would you grab? Mine always used to be photographs or something like that until I discovered back blaze.  It's an online service that backs up your entire computer for $5 a month (I think it is USD but I don't remember for sure) and if you have to use the service to get your stuff back, you pay $100 for them to download it back onto your computer.  I didn't get this service incase of a fire but because there were so many break-ins in our area the summer we went to california for 3 weeks and I was terrified that they would steal our external hard drive just to be a dick so I did some research and found this.  I highly recommend it in case of any disasters that could destroy your house or belongings.  I think I would be in pure panic mode but I hope I would grab my purse because your wallet would have your drivers license and credit card which would probably be quite helpful in times like this.  And maybe our box in our computer desk drawer which contains our birth certificates, sin cards and passports.  Hopefully it never does come to that though.

at May 06, 2016
Email ThisBlogThis!Share to TwitterShare to FacebookShare to Pinterest
Labels: Five on Friday