I know you are all wondering where the Bachelorette recap is this morning but it is being pushed back until tomorrow for two reasons: this is far more interesting (in my opinion anyways) and after I got home from bootcamp last night, I was too tired to watch tv and went right to bed.

On Sunday I ran the half marathon at the 2016 Banff Marathon.  It landed on Father's Day which I thought was terrible but it was Greg's idea to register for it and he was ok with me running on his day.    We were supposed to be in DisneyLand during the Calgary Marathon so Greg suggested this as an alternative when I was annoyed I had to miss Calgary.  It is one of my favourites.  We ended up postponing our trip to Disney until November for a variety of reasons but in the end, my amazing physiotherapist Shari at the Running Injury Clinic suggested I skip Calgary and focus on Banff instead.  So I did what she said like I always do because she is the best at her job and she too is a runner which really helps! 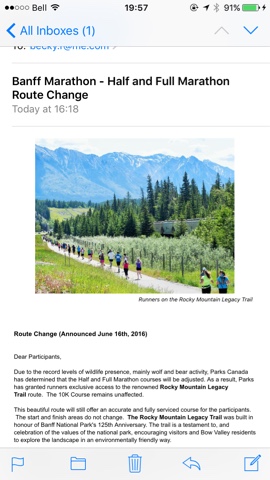 On Thursday the Banff Marathon committee, along with Parks Canada, decided to implement the alternate route due to an increased presence of wild life in the area that we would be running.  If you have been following the news, you would know that there have been wolves and bears coming into campsites looking for food.  They had to euthanize a female wolf because they were becoming a problem.  Let this be a friendly reminder to those not familiar with Parks Canada rules: DO NOT FEED THE WILDLIFE!!  They become too dependant on getting food from humans and will start coming into where people are camping.  This is not good.  Animals get put down when this happens.  As cool as it would be to see wolf (or maybe not that cool), its not a good thing.  You would be surprised how many tourists you see a) feeding the animals and b) getting so close to animals that you think that you are going to read about them in the newspaper and not in a good way.

Anyways, back to the marathon.  This is the first time I have ever had a run changed by wildlife or anything for that matter and although I was annoyed that this had happened, I am quite grateful in the end.  The alternate course was way easier then what the original course would have been. Also a first, is getting a virtual bag instead of a bag full of stuff at package pick up.  Not that I would remember to use any of the virtual coupons and deals (to be honest, I wouldn't use the paper ones either) but still a great idea to eliminate paper waste. 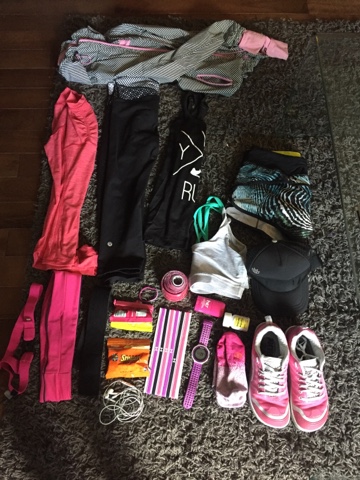 Here is everything I needed and more for Sunday's race.  Since it was in Banff and nothing opens in Banff until after the marathon started, I had to make sure I had everything I needed before I left.  I brought both crops + shorts as well as my downtime jacket and 5 mile shirt because you just never know what you will need come race day.  Thankfully I didn't need my jacket!! 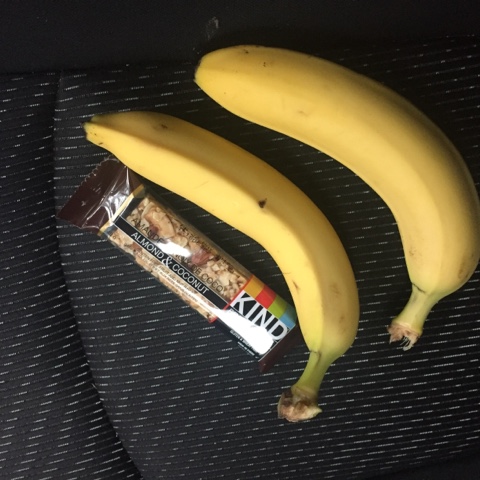 I normally only ever eat a banana before a half marathon but because of the 930 start time, i was worried I would get hungry during my race and I didn't want that.  So I ate one of the bananas and the almond and coconut kind bar and it did the trick. 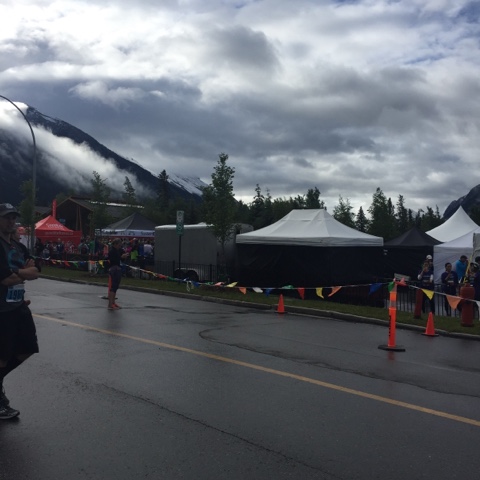 It started raining Saturday afternoon as we drove to Banff and continued into the evening. Around 9pm, it stopped and you could see blue sky and I was optimistic for great weather the next day.  However, more rain moved into the area + continued until Sunday morning.  The forecast was optimistic so I chose to skip my jacket and wear a crb under my 5 mile long sleeve shirt.  As we got closer to Central Park, which was the start/finish for the race, the sun was trying to peak out. 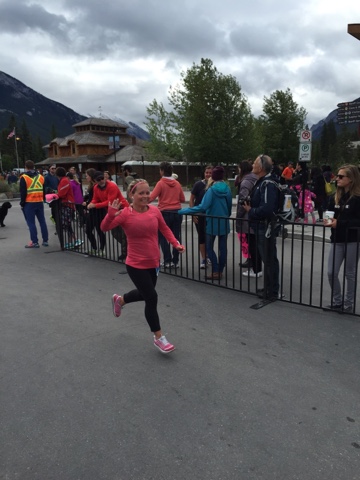 I always complain that Greg never takes any photos of me when I am finishing up a race so he did this time and he lucked out with this shot.  I am literally mid air and smiling and waving.  I was smiling because the end was near and because it was nice to see the girls so excited to see me.  The long sleeve shirt was definitely the right call even though I took it off during my first walk break because I was so warm.  When we hit the half way point and turned around, the wind picked up and it was cold.  I totally overran the first half of the race and because of that, I really suffered on the way back.  For some perspective, I ran the first 5km in 28 minutes which was the fastest I have EVER ran in my life and I did the first 10km in an hour and 6 minutes.  But I was tired on my way back, it was hillier, the wind was in my face and I kept getting side cramps which I never do and my sole of my right foot ached with pain.  When I finished the race, I had severe pain right where the bottom of my sports bra ends.  It wasn't from my bra because it was inside my body.  It hurt really bad and then by the time I went to bed, the left side hurt too.  Monday morning they were sore but I as write this late Monday afternoon, they seem to be ok.  I have no idea what it was from, but it sure sucked.  Also I had a hard time breathing too for a few minutes after the race.  It just hurt really bad.  I think it was just running in a higher elevation.  It didn't last too long.

After I got home, I inspected my right foot and sure enough I had a massive blister on the bottom of my foot.  My shoes were new but I had been wearing them for the last month and had wore them for the 17km run the week before without problem.  I inspected my shoe but nothing unusual was in there and Greg thought maybe my socks had worn out but I am not sure that is the case either.  I have 4 pairs of running socks that I cycle through and though these are my favourite, they don't look thinned out. That being said, Monday morning I ordered a pair of high speed socks from lululemon to see if that helps.  I didn't want to pop the blister because I was afraid the pain would hurt too much and I didn't want to risk infection so I just kept walking on it and it has hardened up which I think is safer then popping it.  I have no idea what will come of it but hopefully nothing serious.

I was initially disappointed with how  hard I ran the first half and how much I suffered on the way back, but I have been battling a weak hip for a few months and it has been a hard road back.  And Greg pointed out that last year at the Calgary Marathon I finished in 2:46 after battling back from a it band injury in San Francisco and was 15 minutes faster a year later so they were glimmers of hope.  I have a lot of work to do between now and the SeaWheeze in August and I am sure I will get there and beat my PB of 2:21. 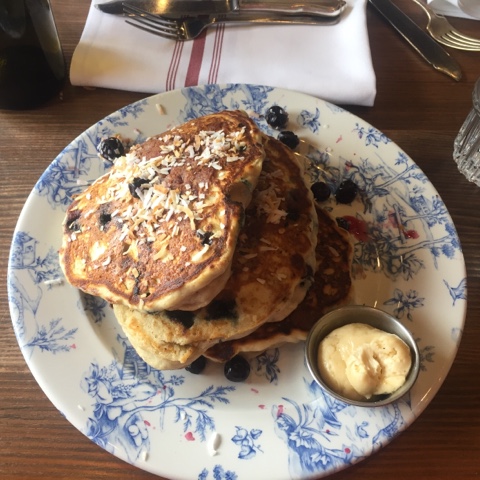 After the race, we went to Park Distillery which has become both our favourite and go to restaurant in Banff.  I had blueberry banana coconut pancakes with maple butter.  They were heavenly but I was so tired that I barely ate any.  I mostly drank my body weight in water.  We were seated on the upper most level of the restaurant which meant a lot of stairs up and down which are never a good thing after a hard half marathon hahah. 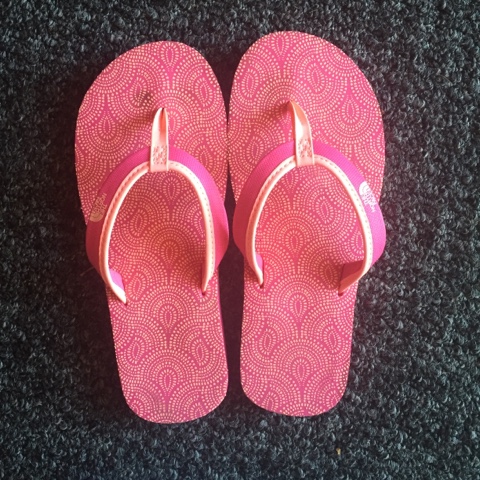 We spent an hour or so after brunch walking down Banff ave where I bought some flip flops because I needed to get my shoes off of my feet to stretch and relax them and the girls bought some candy. The shoe were pretty pink and from the kids section at The North Face store hahah.  I had high hopes of biking or hiking post race but I just couldn't do it, so we headed back to Calgary and had some sushi for supper.

This morning when I got out of bed, I nearly fell over with pain from tightness in my calves.  Greg used our hard plastic roller on them and I thought I was going to die.  Penelope came running into our room because she thought I was hurt.  I went for a long walk after I dropped the girls at school and then came home and mowed the front and back lawns of my house and our neighbours.  I tried my hardest to keep moving so that my legs would loosen up.  I rolled out and there wasn't much pain other then my calves although my it band sure feels tight on both legs.  Stretching out my hamstrings was more painful then I would have liked but overall I am feeling pretty good!!