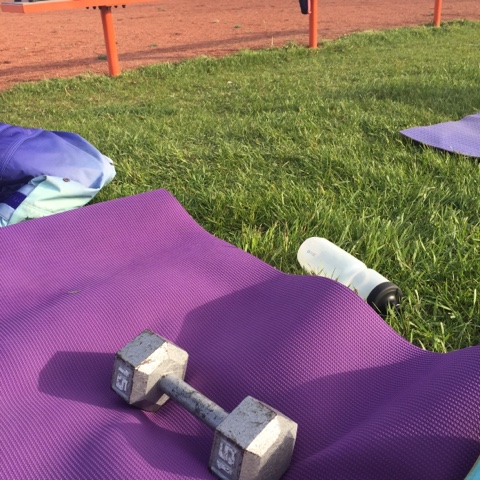 Monday just saw me do bootcamp in the evening.  I don't remember what we did and this photo is actually from Wednesday's bootcamp but I am sure I was tired when we were done. 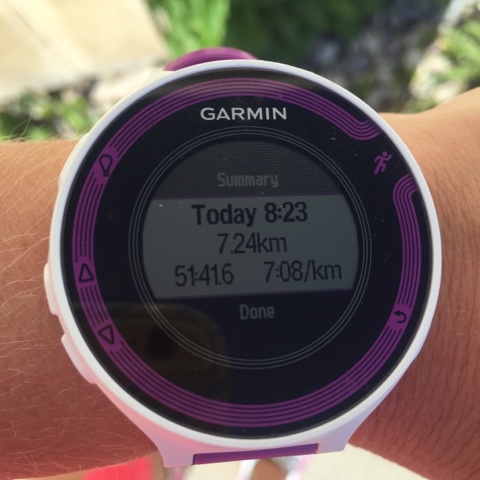 On Tuesday I ran just over 7km and felt really good.  I usually hate running at home and not in a park but I have found that running from my house to the fish creek train station down James McKevitt is a really good sidewalk run.  It has a great combination of flat spots and hills.  It's really good for my week day runs and getting hills in which I try to avoid at almost all costs. 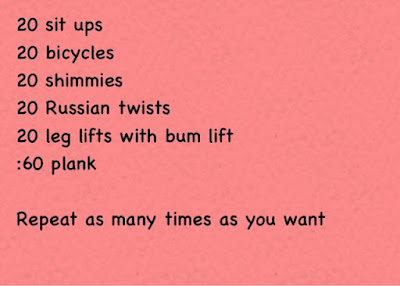 Tuesday also saw me doing this workout later in the day. I did it 3 times but it's such a good one that you could easily do it 5x in one shot.  I really need to focus on my core so I like that this one is quick and easy. 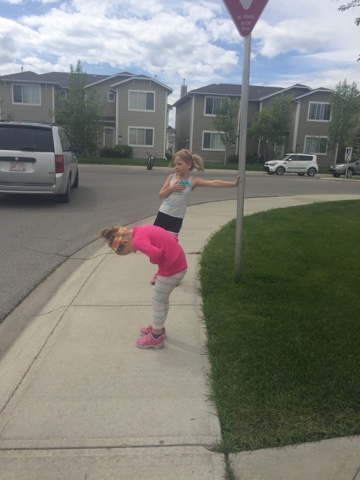 On Wednesday, it was Global Running Day and so the girls and I went for a run after school.  We only ran about 1.3km but penelope was pretty tired.  Finley did much better at pacing herself where Penelope just ran real hard, rested and ran real hard again.  It just makes me happy that the girls want to run and live healthy, active lives! 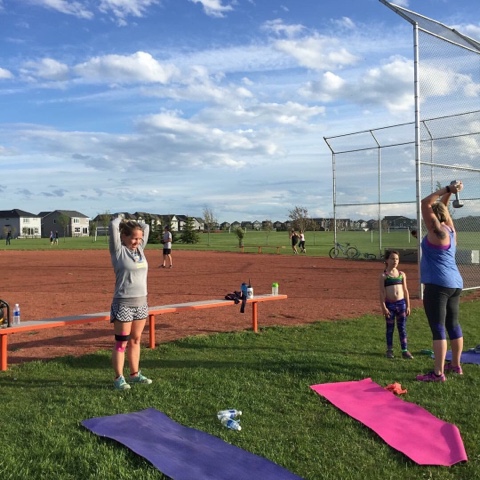 I went to bootcamp Wednesday night and we did some running around the baseball diamond and lots of arms it felt like.  My arms were hurting for days after this workout.  It was a great night for an outdoor workout. 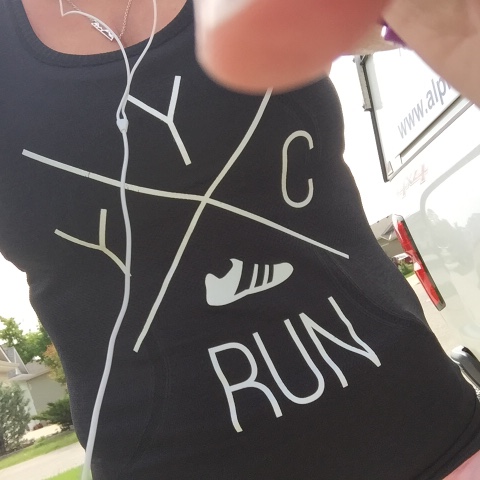 Thursday saw me finally wear my new Lululmeon + Local Laundry collaboration Swiftly.  I ran just over 11km according to my garmin but it was closer to 12 since I forgot to restart my garmin on 2 different occasions.  I was really happy with this run.
FRIDAY: 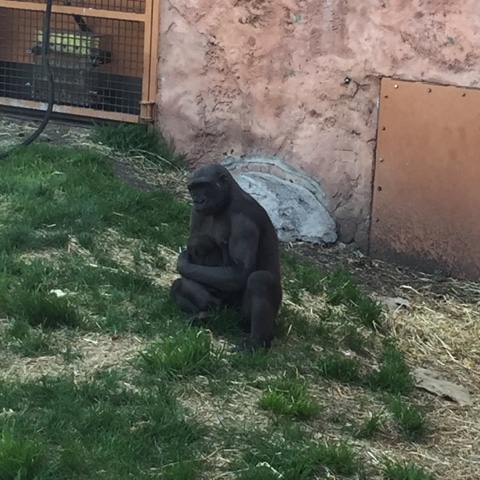 Friday saw me volunteering with Finley's school as all 3 Grade 1 classes attended the Calgary Zoo.  It was hot and busy and kids are bossy and don't listen and so by the time I got home on Friday, there was no way I was doing any exercising.  I was done for the night.  Greg, Brad and the girls went for a bike ride and went to bed and was asleep by 730pm which is early - even for me haha. 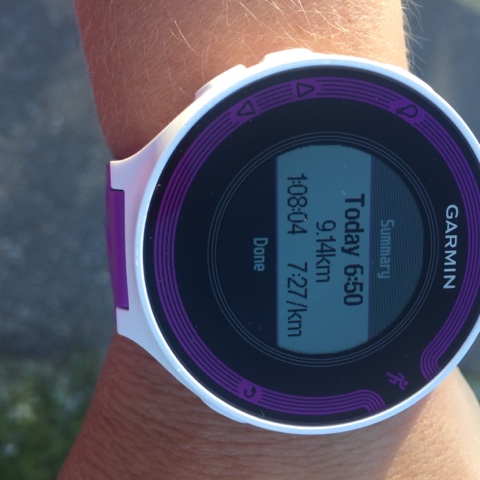 On Saturday morning, I got up really early so I could beat the heat on my run.  I had planned on running 15km to prepare for my half marathon in Banff on the 19th of this month, but I had to stop at just over 9km which was devastating.  I was experiencing pain behind my knee and some tightness in my it band.  I didn't want to push it on a training run so I stopped my watch and walked the remaining 6km back to my car.  It was the longest 6km of my life.  I was upset, I had tears welling up in my eyes, I was angry, bitter and so frustrated.  I have been dealing with a weak hip for a long time and I had gone nearly 5 weeks without any pain anywhere.  I had no tightness or soreness, it was fantastic and then there it was on Saturday.  I had been following Shari's plan to a tee - stretching, rolling, strengthening, gradually upping my distance run so you can understand why I was mad.  When I got home and was talking to Greg he figures it was because I ran on Thursday and ran it quite quickly for a long training run and then instead of having a recovery day on Friday, I spent the day walking around the zoo and then I ran again early on Saturday.  So he thinks that I will be fine to run on Tuesday and then do my last long run on Thursday. I hope he is right!! 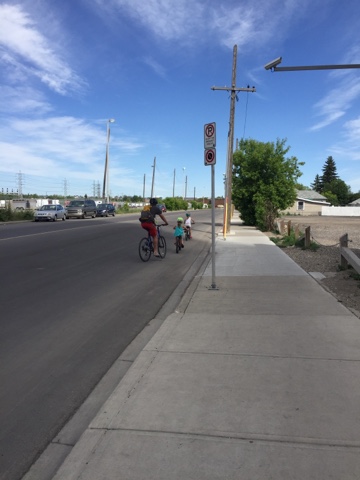 After my run on Saturday, we headed to the girls' soccer tournament where they won both their games and Penelope scored the winning goal in the last game! After a quick lunch out, we went for a bike ride around downtown and stopped at Village Ice Cream for a quick and delicious treat.  We ended up biking around 12 or so km.  It was really good despite the really hot temperatures.

SUNDAY:
On Sunday, we had Penelope's birthday party for all of her friends since it's way easier then doing a summer party when her birthday actually is.  I didn't do any workout at all  - just strengthening, stretching and rolling.  I had no real tightness anywhere so I am hoping Greg was right and I just did too much to close together.  I should find out next week.  Fingers crossed.

How did you guys stay active last week? This week I have bootcamp and a few runs planned plus I hope to get better at getting my home workout routines in.
at June 06, 2016
Email ThisBlogThis!Share to TwitterShare to FacebookShare to Pinterest
Labels: Calgary, Calgary Zoo, Fish Creek Provincial Park, Fit Week In Review, Garmin Fitness, Local Laundry Apparel, Lululemon, Village Ice Cream, YYC