Penelope has an August birthday and we have always struggled to find a good time to have her party. Everybody is always so busy, ourselves included that became hard the older she got.  On her 4th birthday, we had it in September which worked out good but Greg likes to camp in September so he didn't want to do that again.  Last year, we decided to do it in June but on the day of her party, she got the flu and we had to cancel the whole thing.  This year we planned it on the same Sunday as last year since our Saturdays are full of technical training and it worked out. 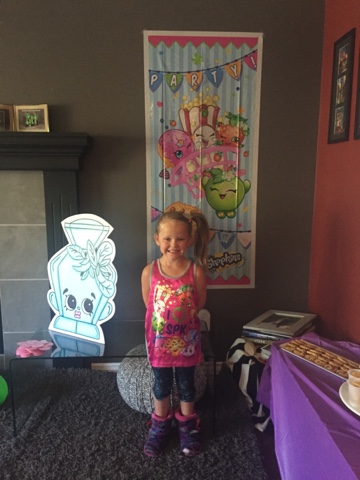 Normally I pinterest the shit out of birthday parties but this year I did not.  I just didn't have enough time and really the kids don't really care.  This is the only decor I had outside of the table where the cake and cupcakes were.  We didn't even end up playing the pin the flower on Penelope Perfume (a real shop kin by the way) but it looked good on display and now it is on display in penelope's room which is where she wanted it anyways. 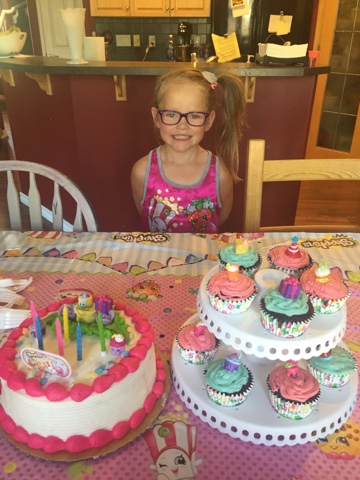 We had a cake and cupcakes this year.  You can't really see it but she has a shopkins hair clip in that I had made by Em + B Designs here in Calgary.  She loved it.  We put shopkins on each of the cupcakes so that each kid got one.  I was worried it was going to cause fights but I bought all birthday themed ones so they were all pretty similar. 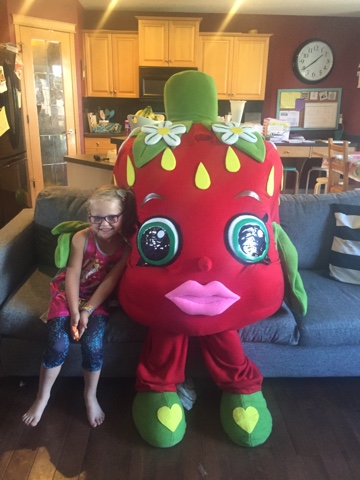 The highlight of the party was Strawberry Kiss showing up to hang out with the kids.  I got the idea back in February to have a Shopkin mascot come to her party but I contacted every mascot company in the city and the only one who was willing to work with me was Mascot Party's and I highly recommend them.  They told me that they would try to track one down and to contact them again in March and they would see if they could get one in time for Penelope's party.  And they were able to get one in.  It was Strawberry Kiss' first ever birthday party and she had to have a helper because her costume is so large and awkward it was hard for her to do much.  They danced the chicken dance, the hokey pokey, happy and you know it, they played hot potato, they played a ball game and got candy from Strawberry Kiss.  It was so awesome and worth every penny! 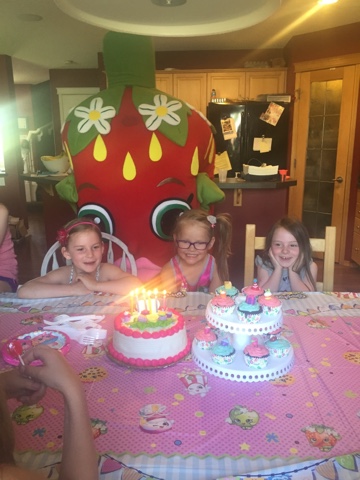 I really wanted to make this party extra special for Penelope this year since we had to cancel her party last year and I succeeded.  She told me last night that it was the best day ever and I was the best mom ever in the world for making it all happen.  And that was all I needed to hear to make it all worth it.
at June 09, 2016
Email ThisBlogThis!Share to TwitterShare to FacebookShare to Pinterest
Labels: Birthday, Calgary, Mascot Parties, Penelope, Shopkins, YYC