On Sunday, we went for brunch at Ten Foot Henry with Greg's mom before she headed back to Saskatoon and then we headed to St. Patrick's Island to explore.  Greg and I have briefly ran through it and around part of it last year before it opened but hadn't seen much of it.  It started out cloudy but it warmed up soon and got quite warm.  It was the perfect afternoon. 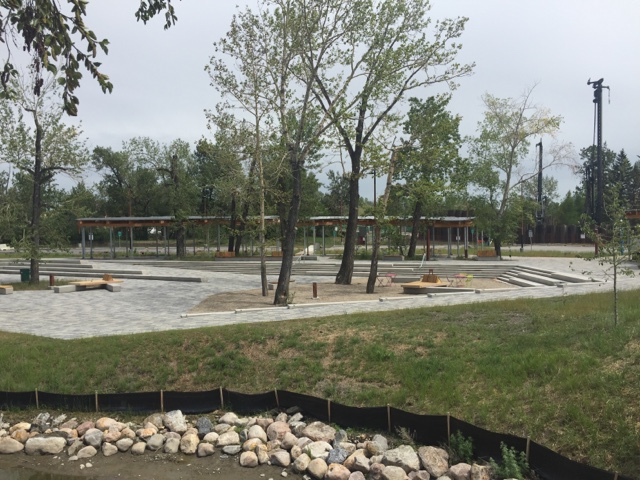 I love all the mix of wood and metal that surrounds the area.  I have no idea how it will hold up against the nature elements but it sure looks great. 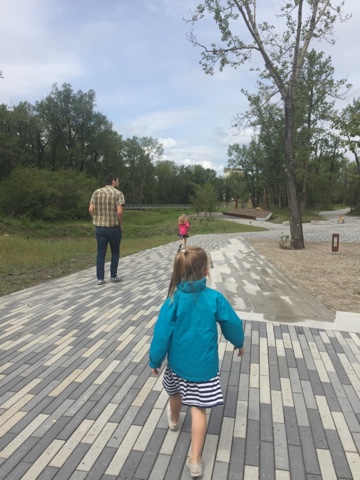 How awesome is this path instead of boring sidewalk?? 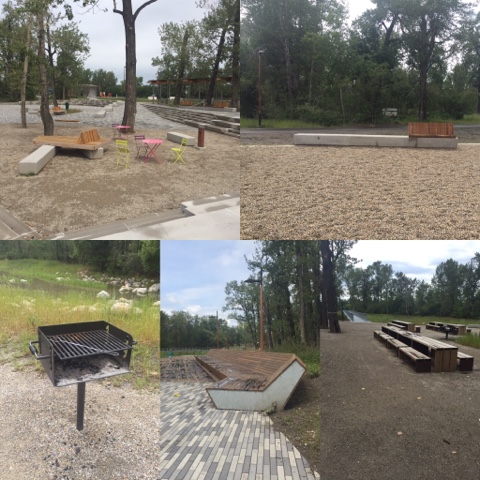 So many amazingly well crafted and modern seating areas and some barbecues for wiener roasts.  Seriously I cannot decide which seating I like best but I am almost positive I want them all in my backyard.  I love it. 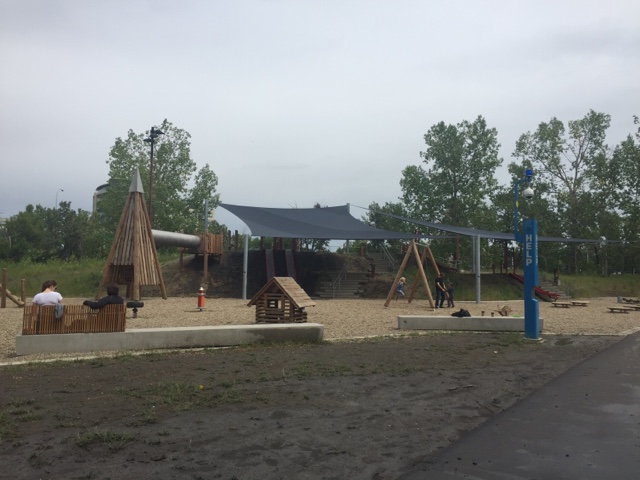 When this park opened last year, the sliding hill was not covered and apparently the slides - which are metal - burned some kids when the weather was really hot so instead of getting rid of them or letting kids get hurt, they covered them.  This also is a bonus when it has rained a lot and you are worried they were going to be wet.  This is not called a play ground but a play mound.  It has everything you could want for hours of fun. 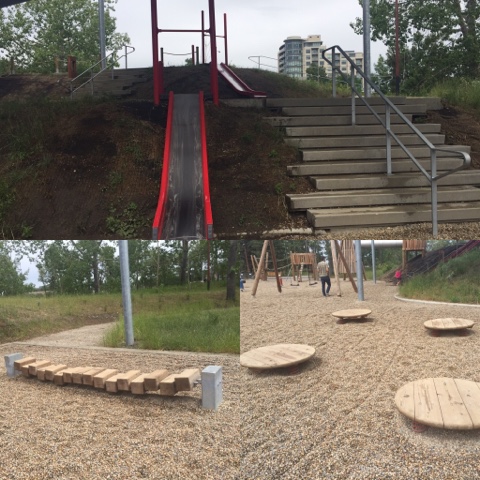 The apparatus on the bottom left is way more dangerous then I thought it would be, although I think it is because I lack both balance and coordination.  The girls really liked it.  It's basically like a swinging bridge that is very swing like if that makes sense.  The round wooden things are like trampolines, they bounce up and down when you jump on them. 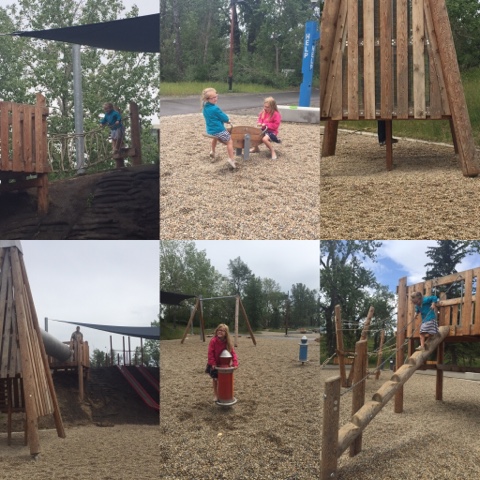 Greg enjoyed this play mound as much as the girls.  He climbed up the play structure and slinked his way through the tunnel to get to the other side.  He recommended that I try it but I passed.  The girls were disappointed when we decided to move on, but that was temporary. 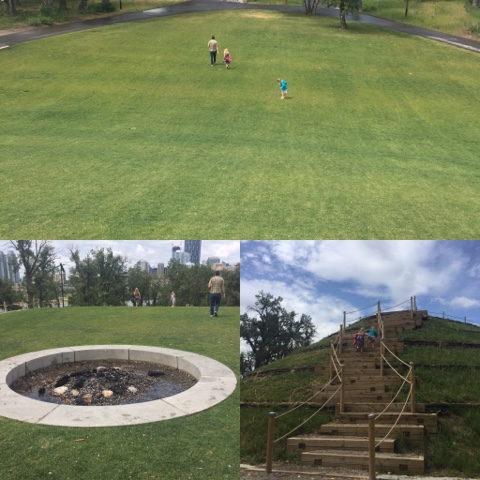 There is a hill just behind the play mound and you can see just the stairs.  This hill was built for tobogganing in the winter and concerts in the summer.  There is a fire pit at the top to keep warm in the winter and I assume to roast marshmallows in the summer? I have no idea if it is used in the summer or if it needs to be lit by the city or if anybody can light it.  The girls loved running down the hill and if it hadn't rained earlier that day Penelope for sure would have rolled down it.  Actually she would have rolled down it even with it wet but we wouldn't let her do it. 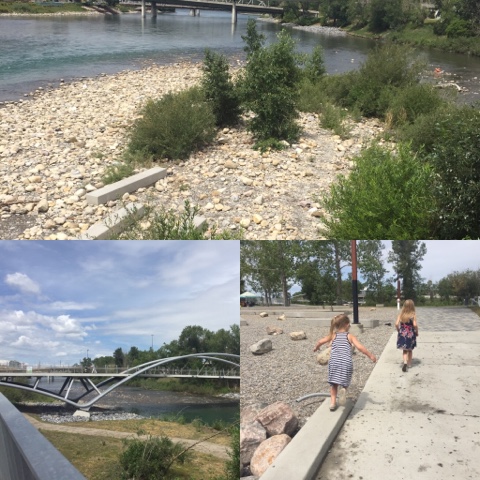 The top photo is the very tip of St. Patrick's Island.  The photo of the bridge is there because it was designed to look like skipping rocks.  Greg and I both decided we loved it more then the Peace Bridge.  The photo on the right is the girls walking along Trout Beach.  You can wade in it which the kids wanted to do but again we wouldn't let them.  I look forward to doing it over the summer for sure though! 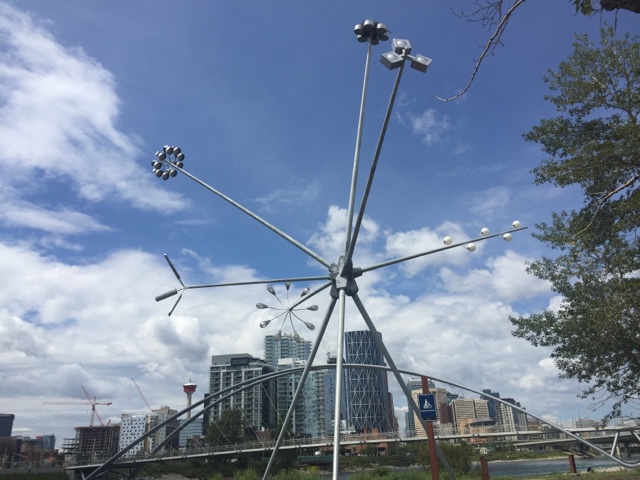 I know a lot of people hate the art that the city mandates for all new construction in the city.  I believe 10% of the budget has to go to public art on display.  This not only looks like a super cool art piece but it is also a source of light.  I have not been here at night to know if it gives off any substantial amount of light but I love it none the less.  I love all the amazing views you get of our beautiful city. 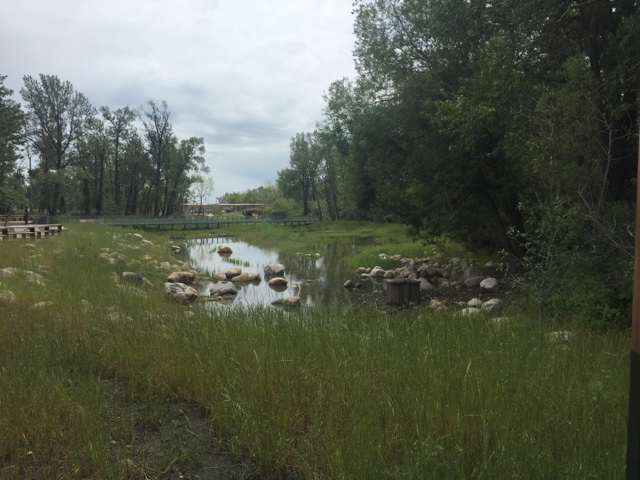 This is a man made wetland on the island where they actually pump water into it.  You can see the pump towards the right side.  We also saw like 50 ducks near here and they were not as happy to see us as we were to see them.  Lots of hissing and staring from the mama ducks. 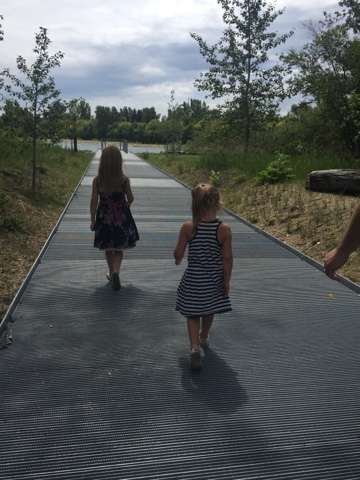 Walking to one last view point before venturing back to our car.

We loved visiting St. Patrick's Island and we were pleasantly surprised by how much there was to do there.  You could easily spend a few hours there and not be bored for a second.  The girls and I can't wait to come back with a picnic and spend more time exploring and wading in Trout Beach!
at June 30, 2016
Email ThisBlogThis!Share to TwitterShare to FacebookShare to Pinterest
Labels: Calgary, Calgary Parks, St. Patrick's Island, YYC