On Thursday, we headed out to Banff for our annual camping trip with my cousin and his family.  It is always a good time that we all look forward to. We drink, eat, complain and occasionally do some hiking and biking and try to kill or at least scare Madi.  This year was no different.

We had no reservations made for this weekend because Greg didn't believe me when I told him that Parks Canada had changed their reservation dates this year from 3 months in advance to January 2nd for the whole year.  Turns out I was right and we had to find a spot.  After we survived an intense storm once we got past the park gate, we headed first to Castle Mountain but it was full because it looked like people had driven up the day before from Calgary and reserved sites and then went back to the city until that night because the sites were definitely not being habited.  We eventually found a site at Waterfowl Lakes but it was a walk up site.  Thankfully we were one of the first ones there and got 2 sites side by side right up the hill from the parking lot.  I was really mad about it at first but it wasn't too bad. 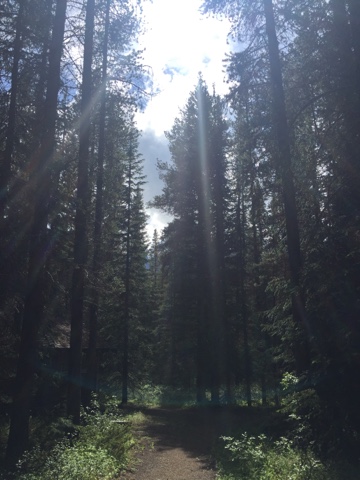 The path we had to follow from the parking lot and bathroom to our site.  It wasn't too bad but it did get tiring after awhile.  Thankfully my cousin found a site right beside the parking lot on Friday morning so we didn't have to haul everything too and from the car anymore, at least up a hill and that made everyone happy - especially negative Nancy hahahaha. 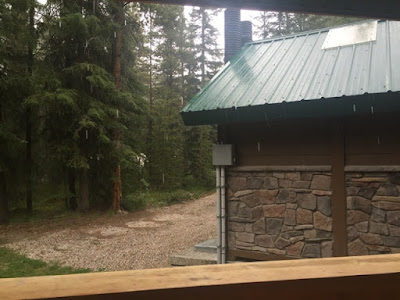 We had no cellular service at all at the campsite so Greg had to drive to Sask Crossing which also did not have cell service so he used a credit card and a pay phone to call my cousin to let him know where we ended up.  It had just started to rain and I was starting to panic because the girls and I stayed at the campsite and it started to rain and we had nothing set up.  There was a kitchen shelter but when I went to go look at it, it was closed due to bats nesting near the chimney.  No bats were seen for the entire trip but I don't know the nesting protocol for bats.  Greg set up the tent in the rain and at the girls and I ran down to the little kitchen sink area near the bathrooms that was covered and hung out there until it finally stopped.  This became our vacation thing - rain following us around wherever we went. 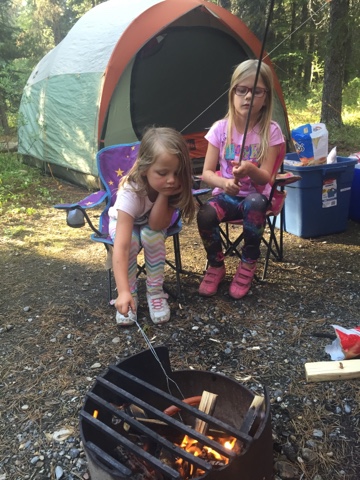 Finally the rain stopped, the sun came out, the tent went up and we made hot dogs for supper.  The girls look unimpressed but they were having fun I promise.  They got much happier once the family showed up. 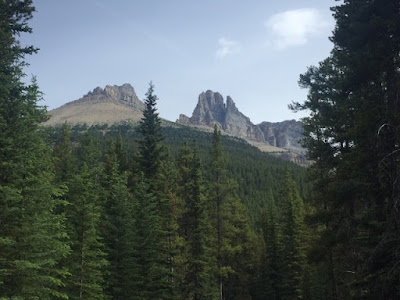 Waterfowl Lakes is a really nice campground but it is sooooo far from Banff.  Apparently the lake is nice but we never did go see it.  When we were in Kelowna, we saw a rented rv which a photo of Waterfowl Lake on it so it must be nice hahaha.  For the record, it was labeled which was how we knew what it was haha. 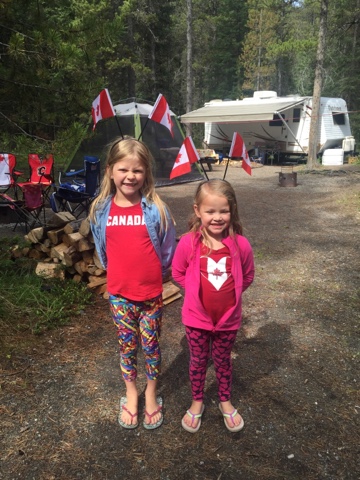 We got ready for Canada Day festivities and although we drove into Banff ( nearly 90 minutes from our site!!) we skipped all the events.  We had planned on staying late for the fireworks but we made the (right) decision and went back to the site where we had hot dogs again haha. 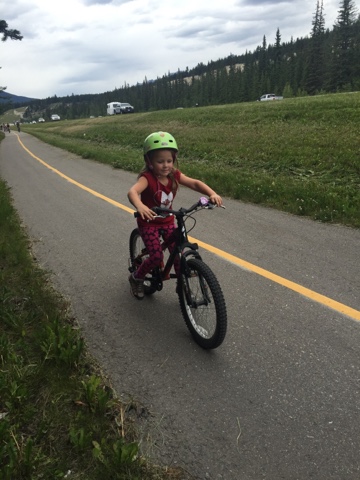 We road part of Legacy Trail on Canada Day.  We chose this because Penelope is just beginning to ride long rides on her own bike instead of being on the trail a bike attached to Greg and Madi wanted a paved trail to bike on where she had almost no risk of dying.  It was a personal best in km biked that day for both Madi and Penelope with a 20km bike ride.  Penelope was rewarded with oreo ice cream from The Cow Store.  We saw 2 beavers in the water along the trail which we all thought was super cool and even cooler because it was Canada Day and there is nothing more canadian then the beaver! 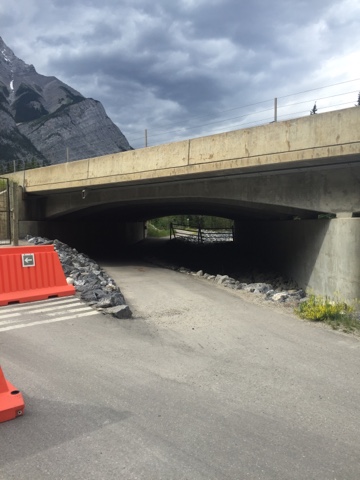 The first time we did Legacy Trail last June, this is the tunnel where Fluffy (our Grizzly bear) came out.   We were on the other side of the tunnel as we decided to mosey on out and scare the sh*t out of us.  Thankfully there were no bear sightings today on the Legacy Trail.  It had been closed earlier that week with a bear spotted around the park gates but it had moved on. 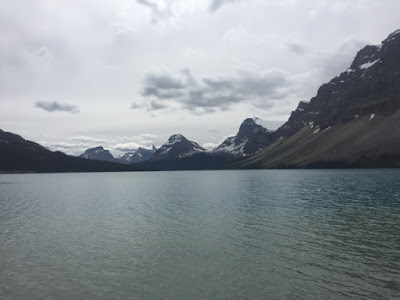 On Sunday, we decided to  hike up Bow Fall Glacier again.  We had done it last year too but it's a nice easy hike and Penelope had sore legs after her long bike ride the day before.  If you have never done it,  I really recommend it.  It's super easy aside from the stairs and cliffy part you climb through but the views are really well worth it.  Greg was happy with the hike that he picked out because he said he thinks it is the first hike in all the years we have been camping together that nobody complained.  Victory!! 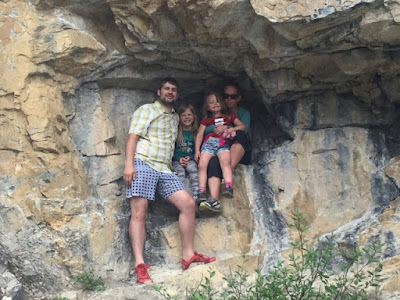 We all took turns doing family and cousin photos in the little nook inside the canyon after we had lunch.  Penelope was still wearing her Canada Day shirt she is that patriotic.  For some reason, my kids like to wear the same thing every day while camping. 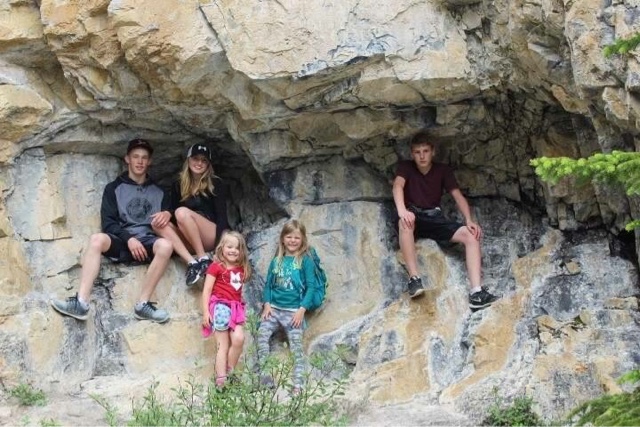 And here is a photo of all the cousins plus one.

It was a great camping trip despite not having reservations and being so far away from a townsite.  We always seem to make it work.  It's nice to have family close by that like to go camping and on the occasional hike and bike ride.  Can't wait for our next one!
at July 11, 2016
Email ThisBlogThis!Share to TwitterShare to FacebookShare to Pinterest
Labels: Banff National Park, Bike Canmore, Bike With Kids, BikeBanff, Bow Glacier Falls, Camping, Canada Day, Hike AB, Hike With Kids, Legacy Trail, Outdoors, Waterfowl Lakes