On Tuesday after we hit up the Kasugi Japanese Garden in Kelowna, we decided to drive to one of the bridges in Penticton since it was very close to our campground and it looked like clear(er) sky that way. 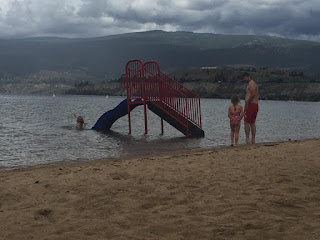 It was bright all the way there and the girls quickly put their bathing suits on to go play on the slide but as soon as Greg took Penelope to the bathroom, it started to rain and get windy so Finley and I again grabbed everything and ran to the car to wait for them to come back.  We stopped at Starbucks to get some warm drinks and then headed back to our campsite. 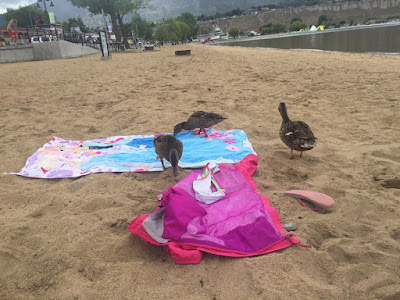 As we were packing up these birds decided to come check out one of our towels.  Apparently they are a known nuisance in the area because people feed them constantly.  So freaking annoying!! 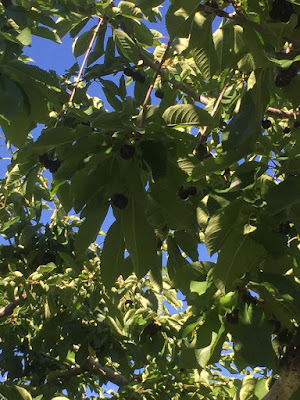 On Wednesday morning we headed out cherry picking.  We had never done this before so it was to be a new and hopefully fun experience.  What we didn't know was that it was a relatively fast activity when you didn't want a lot of cherries and in my case, I had no idea that cherries grew on trees.  In my defense, I don't like cherries so I know absolutely nothing about them. 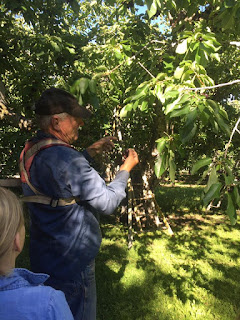 We went to Dickinson's Family Farm in Summerland to pick our cherries.  The owner was a great guy who showed us the right way to pick cherries so we don't damage the branch and prevent future cherries from growing back.  He used to have all kinds of fruits to pick and harvest but now he only has cherries because they are easiest.  Cherries came early this year and he figures he will be out of cherries by the end of the month. 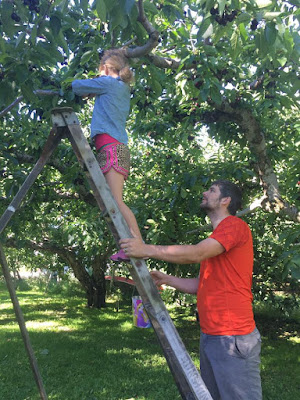 Finley and Greg picking cherries.  Finley picked every cherry she saw which stressed Greg out because he didn't want to pay for cherries that he wasn't going to eat.  So he was constantly going through her bin and tossing the mushy ones. 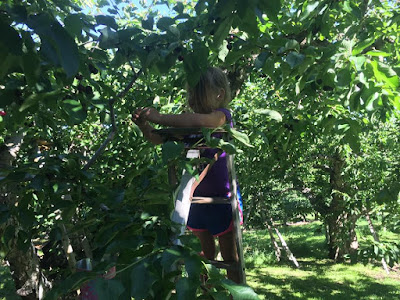 Penelope picked only the very best cherries but she loves them something fierce so maybe that is why??  It killed her to not eat any as she picked them away. 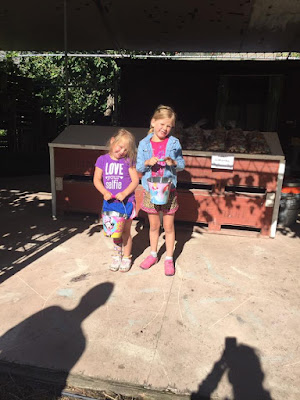 Here are the girls with their buckets of cherries.  We picked 5 pounds worth and paid $6.  Wayyyyy better then prices in grocery stores and much fresher too.  It was a good way to spend a finally sunny day in the okanagan. 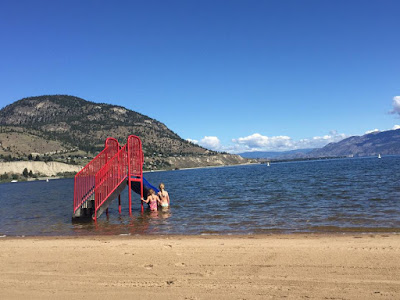 After cherry picking, we headed further down the highway back to Penticton and hit up the beach.  We liked this beach much more then the one we went to on Monday in Kelowna, I am sure there were other nice beaches but Greg really didn't want to deal with the traffic coming in and out of Kelowna.  Our first day there, we spent an hour in traffic because of a car accident and it sucked even with the pretty scenery. 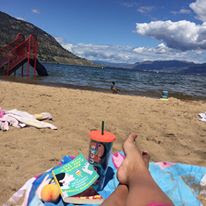 I was just happy to be on the beach without being in my jacket or covered in towels.  As it would turn out this would be the only day I do this hahahaha.  I was reading the book "I will have what she is having" by Rebecca Harrington.  She is a journalist who tries various celebrity diets and then writes about it in a very funny way.  It was a great easy read an very funny.  I laughed out loud legitimately more then once. 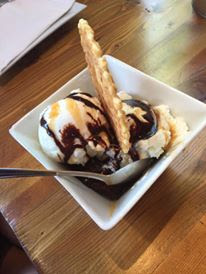 We were going to go get ice cream at the giant peach located at the end of the water front in Penticton but instead we went and bought one of each dessert at the Bad Tattoo brewery.  I had a chocolate brownie with gelato that was very rich.  I ended up sharing with Finley who had ordered a root beer float and did not like it.  They make their own root beer too and she did not like it.  Neither did Penelope or myself but Greg did so after he finished off hers too.  Penelope just had gelato.

After dessert, we headed back to the campsite where I went for a long,  hot run that was way too hilly for my liking and Greg and the girls went for a bike ride.  We finished off our stay in Kelowna area with a great fire and went to bed early.