ONE:  I was randomly walking through my neighbourhood walmart looking for a veggie spiralizer (which they had none!!!! where can i find one??) and I came across this beautiful Pioneer Woman collection.  I really wanted to buy it all but I don't need any of it since all of my plates and serving dishes are white and they don't really work with all this pattern.  I did buy 2 of the tea mugs though and I so desperately wish they had a mug in that yellow pattern bowl on the third and forth rows.  How beautiful are they??  I might go back and buy those teal dessert bowls... 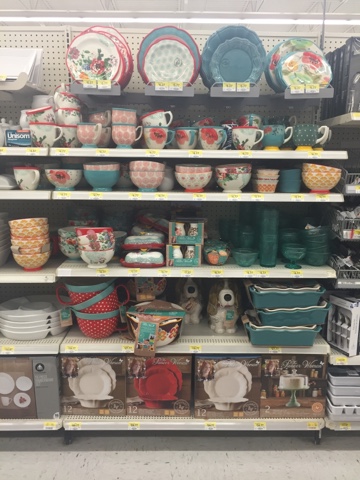 TWO:  Pokemon Go finally showed in the Apple Apps store on Sunday and Greg was on there trying to connect to the Pokemon server to get his character.  He finally got it and was very excited and soon he had the girls convinced that it was the best thing ever.  They have spent hours hunting down pokestars, pokestops and hatching eggs and they are loving every minute of it.  They went out in the rain on Sunday and ran into others doing the same.  This also happened later that night on our way home from Sushi.  I drove home and they walked home in the rain while hunting away.  On Monday, they went hunting after supper and ended up getting caught in a crazy storm that hit our area pretty bad so I had to go pick them up as they took cover in Subway.  Ironically enough they caught 2 of them while waiting for me in there.  On Tuesday night, they insisted I join them and we went to Fish Creek and it was full of people and families doing the exact same thing.  It was fun seeing the kids so excited.  I don't have the game on my iPhone and I am the least gamey person in the whole world - I don't even have a single game on my iPhone or iPad!!  - but I love the whole idea behind Pokemon Go.  People are getting out of the house instead of being inside playing on their phone or gaming systems and they are meeting other gamers doing the same thing.  I have seen SO many people randomly walking around our neighbourhood, in all age groups, doing this.  With so much crap going on in the world right now, it's really great to see something bring so many people together. 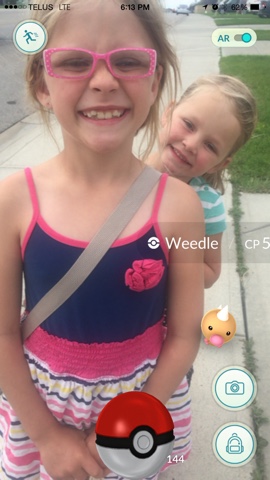 THREE:  We finally caved and bought a new washer when we got back from BC.  It was leaking more and it beep that it would be done washing and then you would open it and water would come gushing out or it would just keep your clothes locked in the washer and I would have to go downstairs to turn the breaker off to reset the washer to get my clothes out of it.  We bought the LG because Greg had looked on consumer reviews to see which was best.  We had our current one for 8 years and it had problems throughout the time with us so we knew we didn't want another one of those.  I had seen an advertisement for a Samsung one that had a secret door in the middle of the big door to throw in clothes that you forgot to put in the first time.  But Greg wasn't sold on it and I would have had to wait until August 3rd to get it and that wasn't an option for us at this point.  We had to tear out the counter that Greg  had installed because this washer was 3 inches taller or something like that.  I was very sad.  It still isn't properly back in yet but at least it is functional again.  We didn't get the dryer when we replaced the washer because I thought that because they were both white, it wouldn't matter and why spend another $800 if you don't have to.  However, once it arrived and it was all set up, I immediately regretted it.  That being said,  we are still holding off in buying one since we have a disney trip coming up and then christmas and I am pretty sure  we will need to replace our dishwasher and our water heater so trying to make good financial decisions and not deplete our savings accounts recklessly.  I am very happy with my new washer even if it doesn't match our dryer. It is fancy, has a nice sound when a load finishes and it gets my clothes very clean without holding them hostage and no leaks!!!! 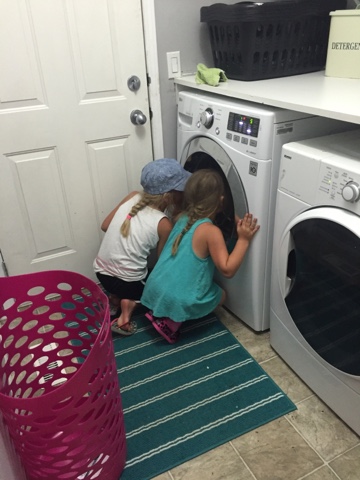 FOUR:  I never did write a post on the girls soccer season that finished up the end of June.  Both girls were on the same U8 team and made so much progress from the beginning to the end of the season.  Penelope was the youngest player out of all 4 girls teams but by the end she was blocking and scoring goals.  Finley, we discovered, plays much better when her sister is not around.  Penelope missed one game because she wasn't feeling well and Greg said the difference in Finley's play was insane.  She is constantly competing with her sister and it affects her play for sure.  We now know going forward to make sure they are never on the same team again although I don't think that we will bump Penelope up a level anymore since she is now playing more competitively at this level then the other outdoor leagues.  Both girls will be playing developmental indoor soccer this fall - Finley will be un U10 and Penelope in U8.  Our last game was flooded out due to an insane rain storm that flooded the streets and fields where we play so there was no photo of them receiving their trophy's so here is a photo from the soccer tournament they were in earlier in June. 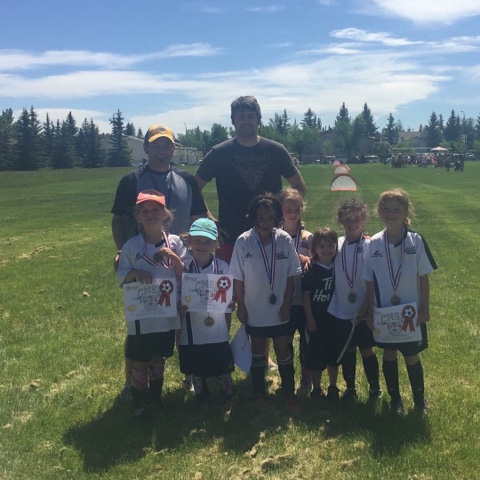 FIVE:   Right after we got back from BC, the girls had eye appointments on Monday morning.  Both girls did really well and Finley was excited she got to do the big girl eye exam and read sentences.  For the 2nd year in a row, Finley's eyes saw no change which is good.  I mean, it would be great if they got better but we are happy that they haven't gotten worse. 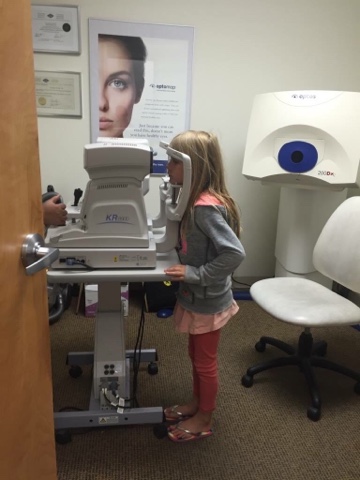 Penelope's prescription changed but that doesn't mean that her eyes are getting worse just that she is getting more accurate with her testing and they didn't want to go full throttle with her full prescription when she first got glasses 3 years ago.  A lot of kids her age are very inconsistent with their responses but Dr. K did each test 3x and she got the same results each time which is really good! 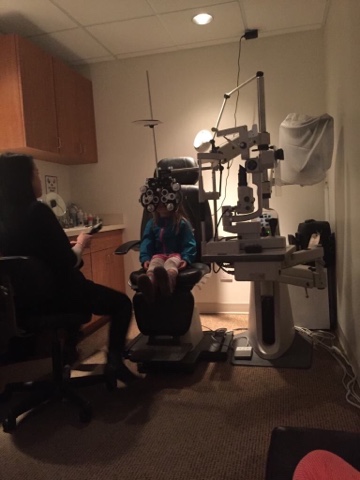 SIX:  And I have one more so I guess it is Six On Friday hahaha.  Last week was Stampede and I went to 2 concerts.  The first one was Thomas Rhett and the second was Zac Brown Band but I added the photos incorrectly and I don't want to change it so I will start first with the ZBB.

This concert was amazing.  ZBB are just insane live.  They put on such an full, fantastic concert.  I was mesmerized the whole time.  They did tons of their own music plus some great covers like Bohemian Rhapsody, Enter Sandman (this photo below is from that one), S.O.B, and surprisingly enough, Into The Mystic which was mine and Greg's wedding song.  We had the Van Morrison version though but this was pretty great to see.  I honestly never ever thought I would ever see my wedding song sung live anywhere, let alone by ZBB. I also had no idea that there were so many members of the band, I think we counted 8 or 9 which is just crazy.  It might just be the biggest band out there these days.  Although swing bands might have more but I mean mostly main stream artists.  If you ever get the opportunity to see them live, go do it.  It is seriously worth every single cent. 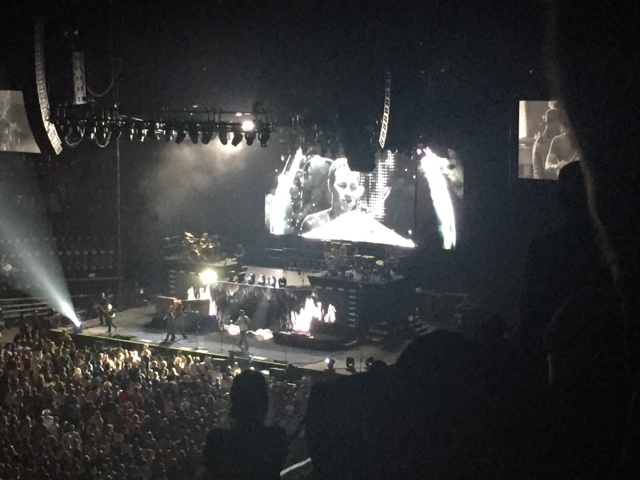 On Tuesday night, we went to Thomas Rhett at the Cowboy's Stampede tent.  It was a disaster trying to get down to the grounds.  We had yet another storm with flash flooding that caused the trains to be stopped at Heritage because Southland was under water.  So because I needed Greg home so I could go, I drove to the Heritage Station which took me an hour from my house.  This is like 3x as long as normal.  The lights were out at the Anderson and whatever that street is between the mall and Willow Park so there were delays in either direction for miles and miles and miles.  Once I got Greg, we attempted to head back south so Michelle could pick me up but we were never going to make it back home in time so we drove back downtown and had supper at our favourite vietnemese place and waited until my friends got downtown. It then took Greg more then an hour to get back home.  But it was all worth it.  At least for me it was.  The rain stayed away and the concert was awesome.  Cole Bradley kicked it off.  He is 18 and from Calgary and was really really good.  Next up was Brett Kissel who was most recently on tour opening up for Garth Brooks.  He was so good.  I knew a few songs before the concert but left a much bigger fan.  I downloaded all of his songs on Apple Music the next day.  Finally Thomas Rhett came on.  And if you know me, you know how much I love Thomas Rhett.  He is one of my most favourite singers around!!  He was so good and even though he was hard to see at times, it was so worth it.  Kelly and I kept pushing our way into the massive crowds and eventually by the last few songs, we were pretty close.  I hope he comes back to Calgary so I can see him in a much more "normal" setting hahaha. 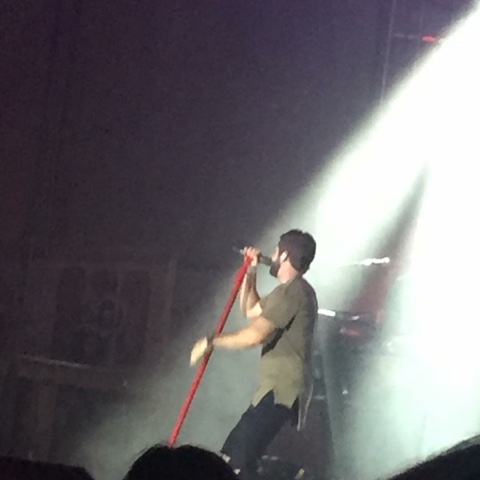