On Sunday morning, we packed up our campsite in Banff, said goodbye to our family and headed further west to the Okanagan where we would be spending the next 6 days.  We were very excited to be coming here as none of us had been and it appeared to be a very beautiful place.  Most of the Kelowna portion of the trip will be in this post but a few things, or at least one that I can remember, deserve a post of their own.  We saw a train coming along the tracks so we stopped at the Spiral Tunnels and watched the trains go through.  Penelope had no interest in it, Finley was disappointed because it wasn't what she thought it would be and Greg was giddy with excitement.  We had seen the train go through 3 years ago for the first time and he was just as excited.  Every day from today until Saturday a new blog will be posted about our vacation so make sure you check back! 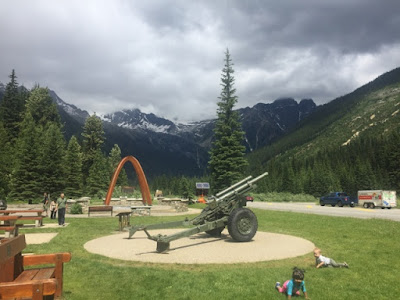 We stopped inside Glacier National Park (Canada one) for lunch along the Roger's Pass.  This area is special because it was the last section of the Trans Canada Highway to be completed.  It took place in September 1962 and was completed when John Diefenbaker tamped down the final piece of asphalt on the road making it officially opened and making it the first and only highway that can get you from one side of the country to the other.  It was a cool place to visit but it was so cold and windy that we did not stay long.  In fact, we finished our sandwiches in the car.  The machine thingy in the middle shoots out something to manually create avalanches to prevent random ones from happening and killing people.  Or something like that.  I don't remember much from when Greg told us. 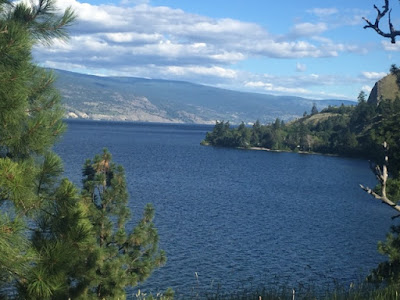 We stayed at the Okanagan Lake Provincial Park - North campground and it was fantastic.  This was my view from my run that I did when we arrived on Sunday while Greg set up the tent.  It was beautiful. 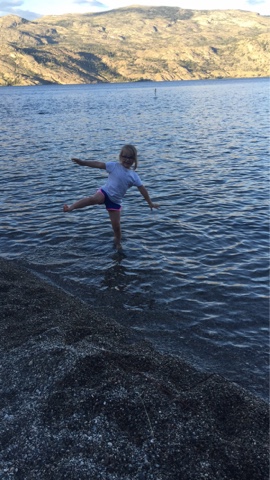 Penelope playing in the water at the campground before we showered 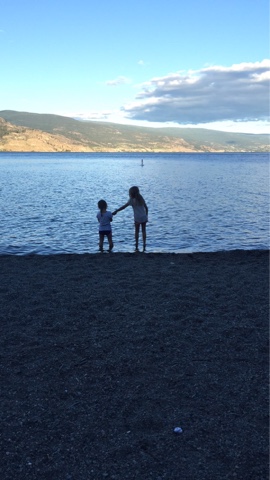 One of my favourite photos I took.  The girls loved the beach, met a new friend that kept them company and loved biking around the terraced campsite.  We will definitely stay here again. 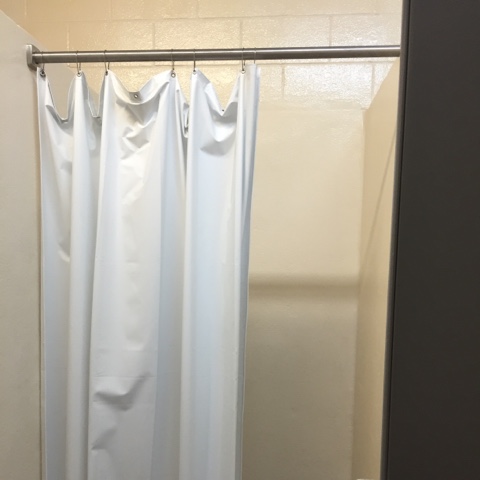 Perhaps my favourite part of the whole campsite was the showers! Free, hot showers opened 22 hours a day.  They closed 2x a day for one hour for cleaning.  When you have been camping for 4 days already and you are in a tent, it was like heaven when we found out about the showers.  We enjoyed these very much. 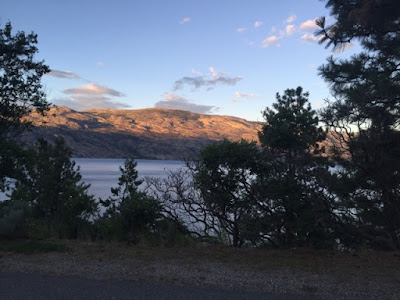 A view as the sun was setting.  The North campground is all terraced so it is like a zig zag down.  The campsites are nicely placed and you don't feel like you are sharing with your neighbours.  We had a slight view from our tent of the lake but it wasn't much.  The only downside to being on the upper terrace level, like we were, is that you faced the highway on one side.  It was still far enough away that you didn't have to worry about your kids running out but it was still loud. The further down you are, the less noise you heard.  This is a very popular campground and sites go fast, we lucked out getting a site only a few weeks before our trip that Greg figures was a cancellation of some kind.  I did run through the South campground and I didn't like it.  It is the more popular of the 2 campgrounds for reasons I don't understand.  Yes the beach access is nicer and it is flat with no terraces and you can't really hear the highway noise but you are packed in there like sardines.

It's located in Summerland and you are about a 30 minute drive to Kelowna I think depending on traffic which is quite terrible and a short ride to the Summerland IGA which I am certain is the most expensive grocery store in the world. They don't even sell their own brand of anything.  It was strange. You are also maybe 20 minutes away from Penticton which had a nicer beach then the one we visited in Kelowna.

I do recommend you visit this campground if you are camping in the area but definitely try to get in the North campground! 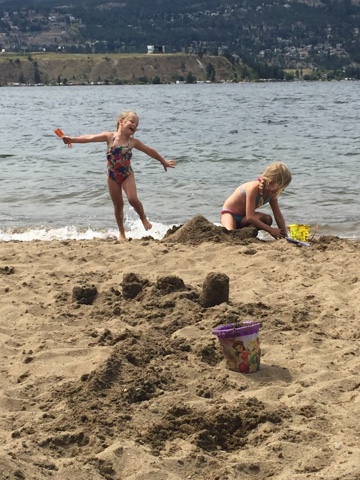 On Monday, we headed first to Myra Canyon for a bike ride but you can read all about that tomorrow.  After we had lunch we headed to the Kelowna City Park Beach where it was kinda nice when we got there and so the girls played in the water and built sand castles.  Penelope's pose was completely random and unexpected and I just got really lucky catching it with my iPhone.  Soon though, the wind picked up and it was like a hurricane was hitting.  We quickly packed up our stuff, ran to the change rooms and got into our street clothes and went to explore the Kelowna Waterfront. 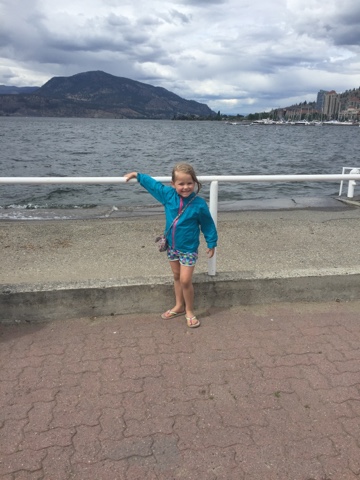 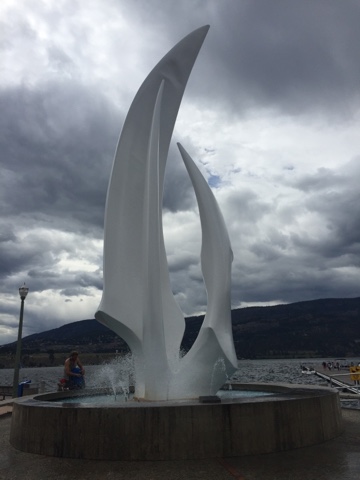 This sail statue is the logo for most of the things related to the City of Kelowna.  I liked it very much 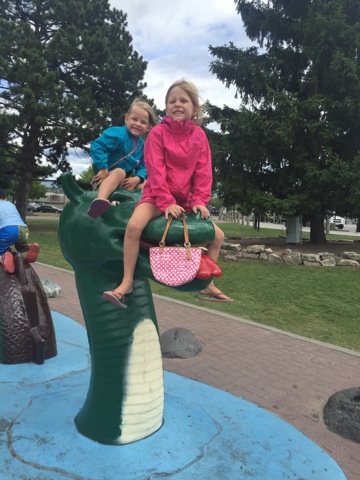 Finley and Penelope wanted to be on top of the ogopogo monster and you can see how windy it still was. 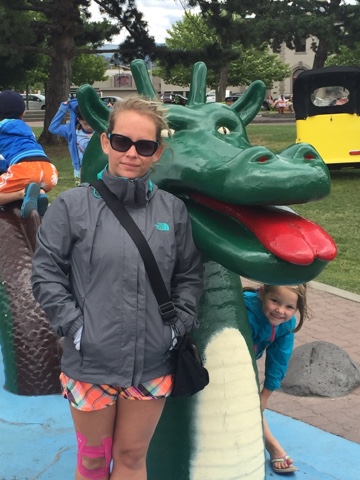 Me with the ogopogo monster who I sadly did not see in real life hahah.  Look at that cute little photo bomber hahaha. 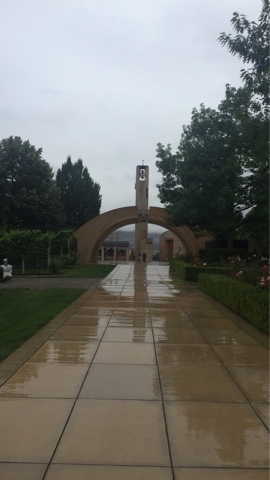 On Wednesday morning we woke up to rain and it basically stayed the whole day.  Where was all the warm weather they said Kelowna got??  It apparently went on vacation too.  We headed to Mission Hill Winery where we had a tour booked for 11am. 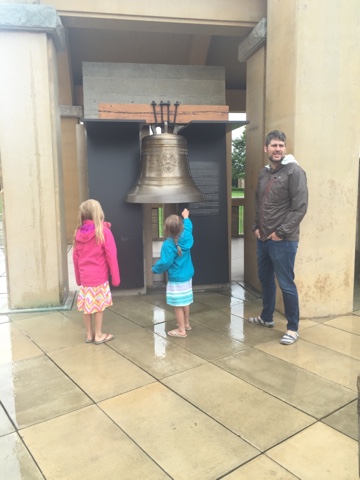 Greg and the girls standing near the 5th bell which was made wrong (don't ask me what was wrong with it) and so it couldn't go in the bell house which houses 4 different bells.  It goes off every hour or half hour with one chime but at noon and 5pm it plays a 7.5 minute song.  We were lucky enough to hear part of it but it was cold and rainy so we went back inside to buy some wine. 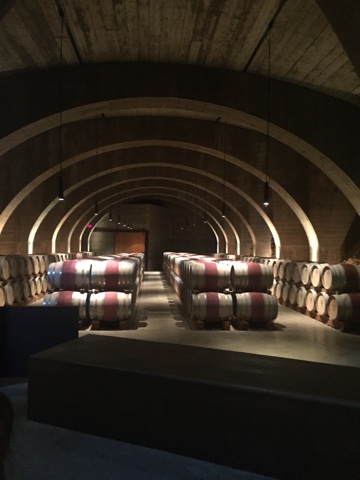 If you have ever been on a tour of a winery in Napa then you probably won't feel like the one here is a tour.  We watched a video and then we walked outside to wear the bells were and she told  us about the wrong bell and the song and then we walked downstairs to the wine cellar and she told us that the red wine dyed the barrels and spoke of the life span and then we went upstairs to the tasting room and tasted 3 different kinds of wine.  The lady giving us the tour was super awesome and funny and I liked her but both Greg and I agreed that it didn't feel like much of a tour. 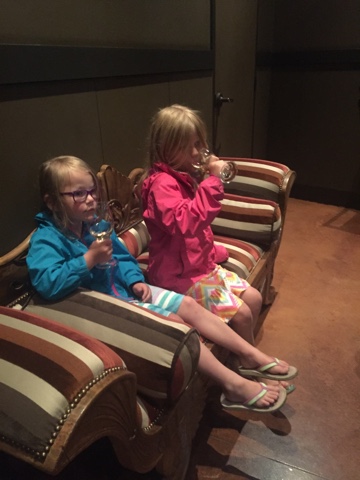 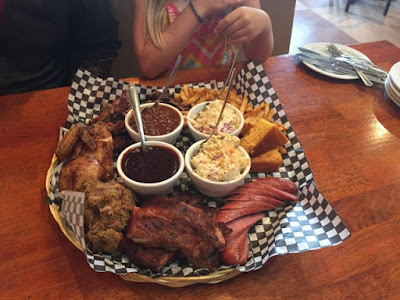 For lunch we went to the Memphis Blues BBQ House in downtown Kelowna.  The restaurant we originally wanted to go to was closed on Tuesdays so we had to find somewhere close to go to.  I don't like bbq but Greg does and he really wanted to try it so I relented and we went.  We got the Memphis platter for the 4 of us to share but they also had a Elvis platter and a Priscilla platter.  You would think the Elvis platter would be the biggest one but the Priscilla was.  I really liked the french fries and the sausage as did Penelope.  She also liked the cornbread.  The ribs were super tender and just fell off the bone but I didn't love the bbq sauce so it was an ok meal.  Greg loved everything and even Finley ate a lot and tried everything.  I personally wouldn't recommend this place but Greg and Finley would for sure. 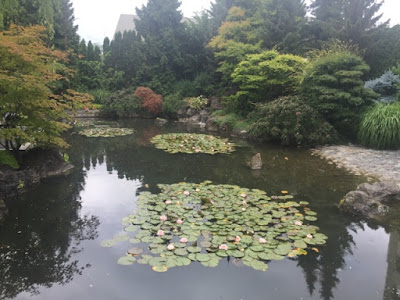 After lunch we walked to the Kasugi Japanese Garden which was right behind city hall.  We had been to the ones in Portland and it is pretty fantastic but this is really well done too and it's even free which is always nice!! 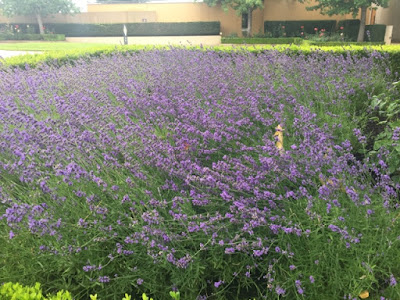 I don't know what these are but they are everywhere in Kelowna!!  I love them and would love to plant them in my yard but I doubt they grow in Calgary.

Despite all the rain, cloud, wind and chill and lack of sunshine and warmth, it was a really good 4 days in Kelowna.  We loved our campsite, we loved Myra Canyon, and the girls loved the beaches so we will definitely be back again in the future with hopefully nicer weather hahaha.
at July 13, 2016
Email ThisBlogThis!Share to TwitterShare to FacebookShare to Pinterest
Labels: Camping, Explore BC, Glacier National Park (Canada), Kelowna, Kelowna City Park Beach, Kelowna Eats, Mission Hill Winery, Okanagan, Okanagan Lake Provincial Park, Outdoors, Travel, Travel With Kids