The whole reason we went on holidays in the Okanagan was because of the KVR Trestle Trail.  Once a month, Greg meets up with some people he used to work with at WP and someone was telling him about it.  Then a guy he works with currently told him it was really good so he looked into it and reservations were made.

The KVR trail goes throughout the Okanagan and we encountered on other parts of our trip as posted in earlier blogs last week.  This particular trail we were riding was in the Myra-Bellevue provincial park.

It's a long narrow road to get from civilization and it gave me a headache.  When we got to the top finally, it was so cold and windy and spitting.  We were all in shorts and I was not wanting to participate in the least.  But I pouted and got on my bike and tried to make the best of it. 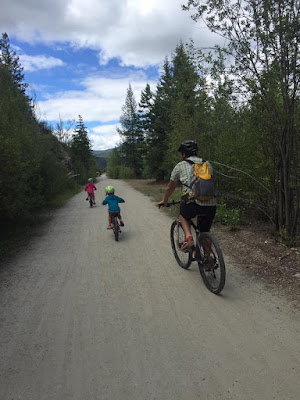 This turned into a park only because people would bike and hike the abandoned trestles and a few fell to their death so they formed the Myra Canyon Restoration Society and made it safe for people to use. 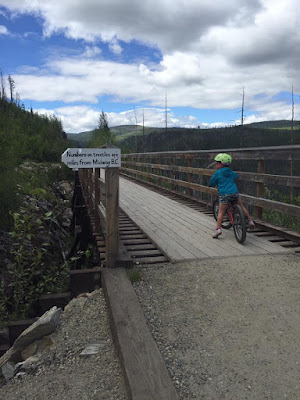 Crossing our first trestle.  There are 18 trestles in total but we didn't cross that many.  I am not sure how many we crossed but I know it wasn't that much.  All the bridges were originally made from wood and but have been rebuilt surrounded by steel.  I know they didn't want to close the bridge in the 1960s so they kept the bridges opened and built around it so that it would be fire proof and more stable.  I don't know if this was the case for all of the bridges or not.  The retaining walls were made of stone but at the beginning of the trail, there was a portion made out of wood that was destroyed by a forest fire in 2003.  It was replaced by Gabion blocks faced with timber to recapture the historic value of the structure. 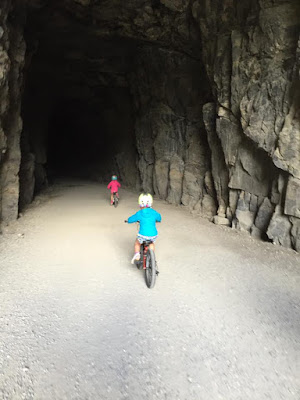 We were lucky enough to bike through 2 tunnels which we all loved.  They originally wanted more tunnels but in a lot of places, the rock wasn't stable enough to make them so they blew it up instead and in some areas you rode between the rock which was also really cool. 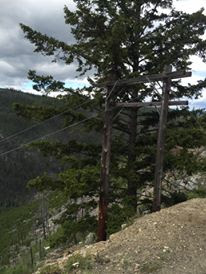 These are telegraph poles that are on the edge of the bank that carried the telegraph wire, which ran over glass insulators.  This was one of my favourite things to see. 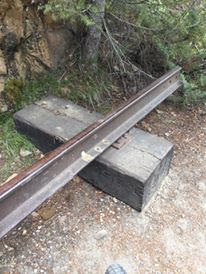 These are some of the original railroad rails.  These were upgraded 2x over the course that the train ran them with the last one happening in 1950. 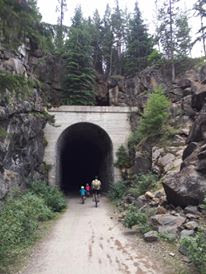 Going into the second tunnel 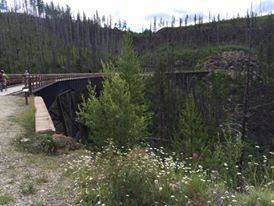 The only s shaped trestle in the valley 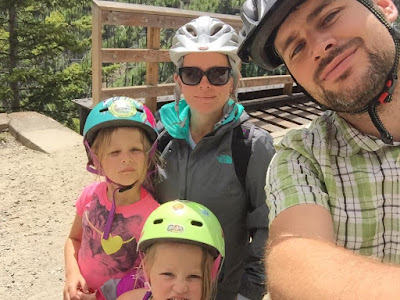 Family selfie at the 6.5km mark of the trail and where we turned around and incidentally, was the largest and longest trestle in the valley. 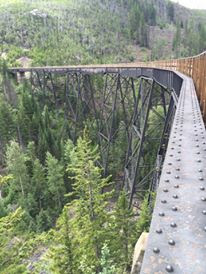 Another view of the largest trestle in the valley 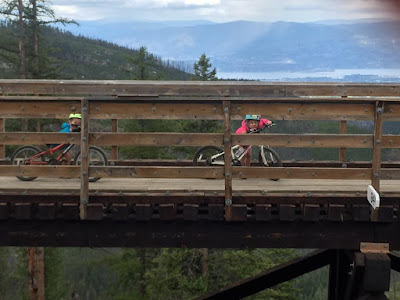 The girls on the first trestle.  Greg captured this  by riding around the one side which had a path from before the trestle was safe to cross.

Ironically enough, as much as I hated the thought of doing this and how much I didn't want to do this bike ride, it ended up being my most favourite part of the entire trip.  Anybody who is the Kelowna area should absolutely do this trail and if you don't have a bike, you can hike it or  you can rent bikes at the top.  It's wide enough to take  your chariot or bike trailer too!