The final post in our Okanagan trip!!!  And if you wondered if the rain and cloud followed us, it sure did!!  We packed up and left the Okanagan Lake Provincial Park behind and made our way to Osoyoos with a few places a long the way. 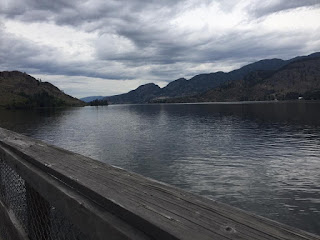 Our first stop was in OK Falls which is short for Okanagan Falls.  I did not know this and I know I understand when I mention PA and people are like huh.  I get it friends!!  There is not a whole lot going on in this town.  I don't know if it was the weather or what, but I just didn't feel it.  We walked along the beach and then we made our way to the bridge which happened to be part of the KVR trail. We walked about half way down and then turned back.  We didn't see the falls because Greg said it was dammed off and not that exciting.  It was only around 11 or so but we made our way to Tinkleberry's which was recommended by some friends of ours.  They have so many flavours to choose from and the portion sizes are ridiculous.  Kids are 2 scoops, a single is 3 scoops and a double if 4 scoops.  The girls were so excited to get 2 scoops of ice cream for the first time in their lives.  Thankfully they let adults get the child size because I did not want 3 scoops like Greg got.  The store is full of trinkets and candy and so much else.  It has amazing Jackson Pollock-esque floors and an amazing glittered door when you left the building but i couldn't capture it properly.  This place is hands down the best thing about OK Falls. 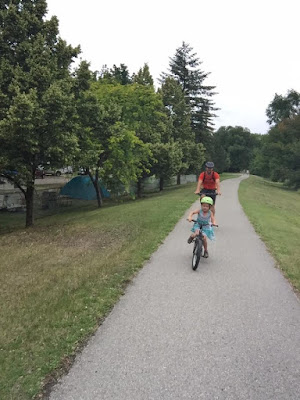 We then made our way to Oliver.  I had never heard of OK Falls or Osoyoos until we planned this trip but I had heard of Oliver since one of our friends has family around there.  Oliver is a cute little town with a charming main street, a great visitor centre with very helpful ladies and a path a long the river that you can bike down, which is what we did.  We started at the visitor center and rode until the path turned into gravel.  It was nice to ride alongside the river and the town. Perhaps not surprisingly at all, this path is also part of the KVR trail.  It is everywhere!!!! 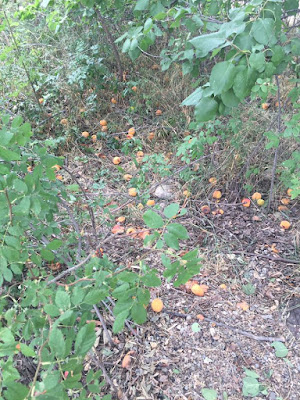 Soon we made our way to Haynes Point Provincial Park.  Apparently this is a high in demand campground and again we got in a few weeks before we arrived and Greg is almost sure it was due to another cancellation.  This campground is indeed amazing and surrounded by water.  It was great as long as there was no wind.  Greg staked down our tent really well but was confident that all the clothes I brought would save it from being flown into the lake.  See, overpacking does have its benefits hahaha.  When we arrived at our site, we thought the previous campers dumped their peaches before they left but it turns out there is an apricot tree in the back corner that were bigger then normal and passed picking and were basically being eaten by birds.  However, a family from edmonton came by the day after and asked if they could have them and climbed the tree and picked what ones hadn't been attacked by birds. 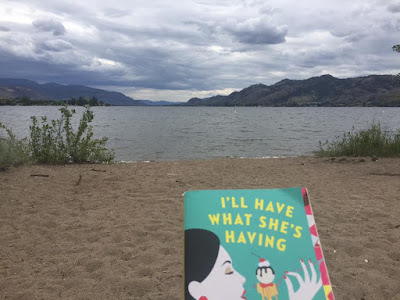 We didn't have a site right on the water, but all we had to do was cross the road from either in front of our tent or behind it and we had access to 2 beaches.  We sat down for awhile and read books after we had at the campsite set up.  But it was kinda cold and so we decided to head into the town to look around. 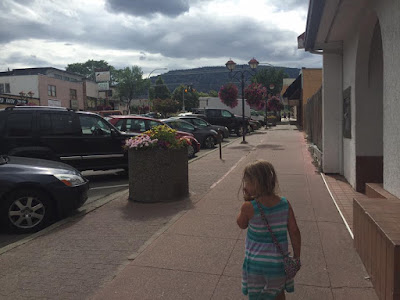 We walked up and down main street and checked out a few shops to kill some time before we went to the grocery store and back to the campsite.  I noticed that everything opened at 930 and was closed at 530.  Small town living was so strange to me haha. 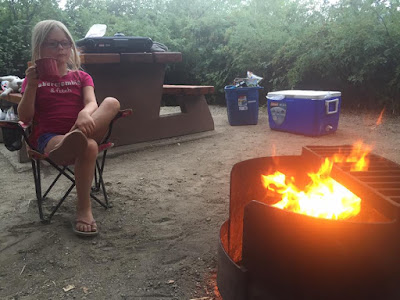 We had a really good supper of perogies and sausages which is something we have never had while camping but if you cook it the same day you pick it up, it works!  You are sometimes limited being in a tent so it was nice to think outside the box in terms of supper.  Finley ate one perogie which is one more then she has eaten in her whole life but ate all her sausage, my sausage and her sisters.  Penelope decided she loves perogies and had 5 of them.  I loved the perogies which were potato and cheddar cheese which is surprising since  i hate cheddar cheese hahaha. After supper we had a fire and some smores. 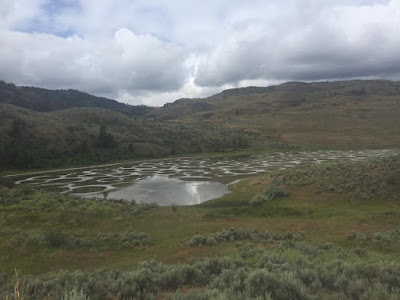 On Friday morning it was again cloudy and windy but it was actually quite cold.  It was the first cold day we had experienced despite all the cloud. Since all we had planned was renting sup and playing at the beach we were kinda at a loss of what to do.  We decided to go to spotted lake which was really cool.  Finley noticed the spots and asked why it was like that before we even stopped.  Apparently it has something to do with the water evaporating from the minerals in the water.  It was a good way to kill about 6 minutes. 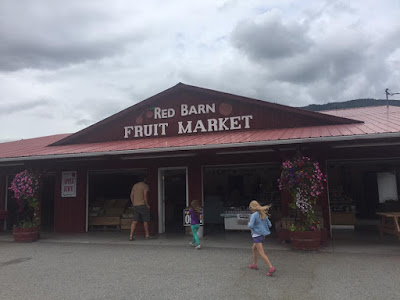 We were headed to some road to do some bike ride when we decided to stop here for some fruit.  We got 4 peaches, some apricots and plums for $2.  Ridiculous!!!!!  And so amazingly delicious and oh so juicy.  We got to the bike ride which was all gravel and so cold so I bailed on it and Greg and the girls lasted about 6 minutes.  We decided to head back into town for an early lunch and then head to the beach and hope for the best. 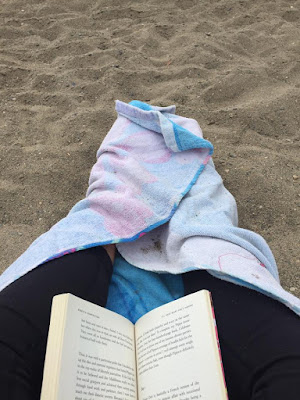 We got to the beach and it was cold.  I had my hood on from my jacket and covered my feet with my towel. I sat here and watched the girls play in the water while I finished my book.  As long as they were having fun, that is all that mattered. 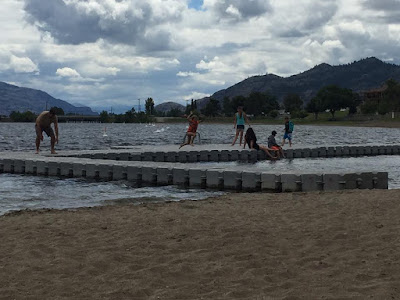 The girls took turn jumping off the dock and then swam back to shore to do it all again.  Every once in awhile the sun would peak out and it would get really hot.  You would get optimistic that it would stay but it would leave as quickly as it came.  Soon the girls got cold and changed back into their street clothes and we walked to Shoppers Drug Mart to see if they had any books for me to read because I finished the 2 I brought with me.  They had no books for me but Finley bought a Monster High Chapter book and Penelope bought some paper to colour on.  I did find 2 word searches that I bought to give me something to do back at the campsite and in the car on the way home the following day. 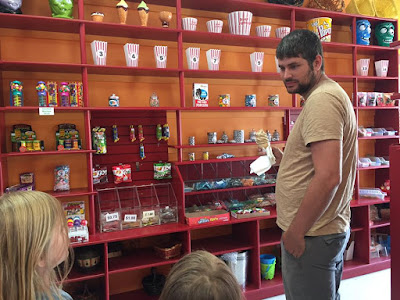 We went to the Candy Store where we got some ice cream and because we spent more then $20, we got to pick one of the numbered popcorn boxes to discover our surprise.  It was great until the girls wanted different numbers.  We ended up adding the 2 together and we got box #10 which contained some smarties, taffy, candy and a coupon for a bottle of Gatorade.  Such a great little thing she does.  I had a chocolate milkshake and it tasted like the chocolate on a dipped ice cream cone from Dairy Queen before it hardens which is one of my most favourite things. 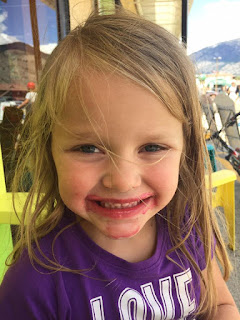 This was outside the Candy Shop as we finished our ice cream.  It is definitely my most favourite photo I took on the entire trip but possibly ever of her.  It encapsulates our trip and her personality to a tee.  Messy and wild.  I love it! 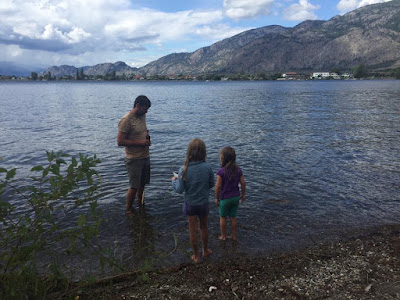 It was really windy at our campsite and in front of it but in behind us, there is a little beach that was sheltered from the wind that was pretty nice.  The girls waded around in the water and we sat and relaxed and really soaked in what was all around us. 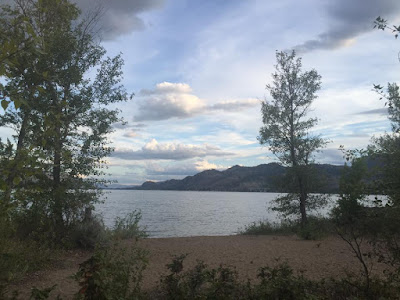 A beautiful last evening in the okanagan.  We were tired of having fires so we opted to head to a fruit stand and stock up on peaches and blue berries to take home with us.  I am really glad we were able to do that because the fresh fruit is delightful.  It is early in the season for peaches but with the mild winter all the fruit is coming in early.  We only missed out on nectarines.  The weather was definitely not what we would have wanted but i must say that in 15 years of vacations together, Greg and I have never had a day of rain or crappy weather ever - no  matter where in the world we were so we have been really lucky.  I just hope that this doesn't set off some sort of precedent hahahaha. 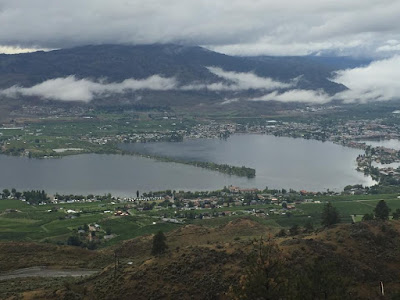 We stopped at one of the viewpoints looking out over Osoyoos as we left the town up the Anarchist Mountain.  The campground we stayed at is that middle skinny piece of land  you see in the lake.  The sign is after the turn off to the road instead of before from the one side so it is easy to get confused like we did haha.  It is one long road for a ways and then it splits with roads going to the left and to the right with campsites down the middle.  Each beach side has campsites too.  It would have been awesome to have a site right on the water but ours was pretty good too.  If you do ever make it out here and you camp, this is a really good place to stay.  It accommodates both tents and rv's.  The bathrooms look like outhouses but they have running water which means real toilets which is always nice.  Like I said earlier, this is another site that is hard to get into so if you want to come here book early!!