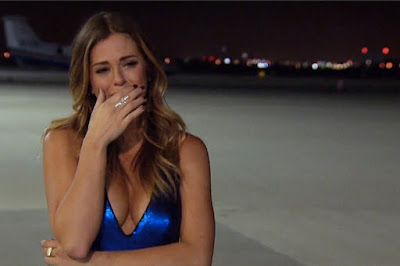 The show starts off with the rose ceremony and first rose goes to Jordan.  Second rose went to Robbie and that made my sister very upset.  Who gets the last rose?? Chase or Luke??  Luke went home and this made my sister even more upset.  Now they are saying their sad goodbyes....  JoJo seems quite upset over saying goodbye to Luke and he is also just as upset but very much in shock.  Actually I think he is more mad then upset.

Greg and Kristy are arguing about the show so I may miss a lot....just a heads up

She misses him already.  This is going to be quite possibly the worst episode of all time.

They are in some exotic location that has nice beaches.  Thailand maybe?

She meets up with Robbie at some crazy market and is so excited to see him.  Although she hasn't told him that she loves him, he feels it from her.  I just don't see it happening though.  I still can't believe she sent home Luke.  He was in my final 2 with Jordan.  Kissing in the rain how romantic and oh so cheesy.  Producers must have loved how mother nature cooperated with them.  And I was right, they are in Thailand.  The red dress she was wearing on the night date with Robbie was on point.  I loved it!!  I kinda tuned out during dinner until Robbie brought out some letter that his dad wrote him about JoJo and the confusion about his ex girlfriend.  She is touched and he tells her to keep it to remind her that he loves her.  So corny.  He tells her that he loves her again but she doesn't say it back to him.  But does make out with him of course.   He gets the fantasy suite invite that Chris has given to JoJo him.  He is excited because he doesn't have to dream about her tonight because he can dream beside her instead.  It's now morning and they wake up together happy and i guess in love???  They are having breakfast in bed in between kisses.  She says she is in love with him and almost told him that she loved him last night but didn't.  She wants to be cautious.  She gets dressed and leaves to go hook up with the next guy she is gonna take to the fantasy suite.

Next up is JoJo's date with Jordan.  He shows up to the beach in a boat and they are excited to see each other.  He missed her.  They are going on a steep, challenging hike and it should be fun.  She's not in love with him yet but she will be hahahha.  It looks like an intense hike.  They made it to the halfway point and the views are pretty nice.  They go into a cave which would be pretty awesome.  They walk down into it.  It looked utterly amazing.  I need to go hike Thailand now.  They are getting closer to the temple so she has to cover up since you can't show your shoulders.  They can't kiss because it is sacred and they want to respect it but it is really hard for them to not be all over each other.   So they say.  They have a passionate connection but she wants to make sure they have an emotional connection too.  They chit chat about family and other stuff and kinda tune out but it goes to commercial with JoJo wondering if this is indeed too good to be true.  It is now dinner time and her dress tonight is not even close to being as nice as the red one with Robbie.  They are talking what their future would be like.  What does the next year look like??  He has no idea and that makes her nervous.  He wants to spend the rest of his life with her.  She brings up Ben.  Nobody should ever bring up their ex up as much as she does with new boyfriends.  Like how can you be moving on and wanting to fall in love and get married when you are still not clearly over the other guy.  Jordan reassured her that he is in love with her and she is happy with this so  hands him the invite to the fantasy suite.  Is the same suite that they use with all 3 guys??  That would be so weird and gross even for this show.  He says yes of course.  They are walking to the suite so we should see shortly if it is the same.....oh and thank goodness it is different.  He shuts the door and then we go to commercial.....  It is now morning time and there is breakfast waiting for them outside the bedroom and for the second time in a row she said "we're eating our first breakfast together" haha can't wait to hear that again later with Chase.  She gets dressed and leaves because she has her final date.

And now it's Chases's turn for one on one with JoJo.  Her outfit is pretty cute.  He shows up on a motorbike and she is surprised.  They of course missed each other.  There is tons of fish where they are and Chase touches it and picks it up which traumatizes JoJo.  She loves his playful personality.  They are cruising on a cute little boat around Thailand.  Looks quite pretty. The wild monkeys would be so awesome to see.

Robbie shows up to the suite that JoJo lives in.  This very much upset my sister haha.  It seemed like a dick move to show up in the middle of a date with another guy.  I didn't like robbie before but I like him even less now.  She loves Robbie and Jordan and could see herself falling in love with Chase.  Tough first world problem there JoJo.

Not loving the dress she is wearing to dinner with Chase.  She had a great time and tells him that.  He tells her that he is scared about the whole idea of this and all the other guys and stuff.  Makes sense to me.  It would be hard to love someone knowing that they are still hooking up with other guys and even more so, knowing that she could choose one of them over you.  She gives him the fantasy suite invite.  And he of course says yes.  I like Chase but I still don't think she chooses him.  He tells her that he loves her and she thanks him.  She is surprised that she doesn't feel the same way about him.  She is doubting her choice and so she leaves him temporarily to go outside to breathe.  And this prompts my sister to like JoJo a lot less haha.  She knows she has to say goodbye and she doesn't know how to do it.  She comes back in to talk to Chase.  She tells him she has been waiting for him to tell her that he loved her and that she basically doesn't feel the same way about him.  He seems to be handling it better then Luke did that's for sure.  Although he just did chug that wine glass.  Ok now, he is getting upset.  He is actually shattered friends.  He is regretting everything he said to her.  He is handling it just as bad as Luke did, if not maybe worse.  She again as upset as she was when she sent Luke home.  He gets up, hugs her and then they leave the not so fantasy suite.  He's definitely bitter about getting the fantasy suite card and then being sent home.  He compared it to having your pants kicked down and getting kicked in the nuts.  That might be the best line in the history of this season of the bachelorette.

Seriously  I had no idea it would be Jordan and Robbie as the final 2.  I doubt anybody saw that coming.

JoJo feels very confident that she has made the right choices in terms of her final 2 bachelors.  She now goes to see Robbie and Jordan.  She is telling them that she sent Chase home and then low and behold he shows up and he wants to talk to her.  I wonder how much product Jordan uses in his hair so his pouf doesn't move.  Back to Chase.....he cares too much to let it end this way.  He doesn't want a second chance but that he is proud of her and thinks she is amazing and that he isn't mad at her for what she did.  He wants what is best for her even if it isn't him.  And that is heart is open for her if he realizes down the road that she did actually love him.  He leaves and of course now JoJo is crying and upset that she didn't fall in love with him.  They must use a lot of make up to keep her puffy eyes under control considering all the crying she has done.

The rose ceremony begins and gives her last 2 roses to the last 2 guys.

Tomorrow is the bachelors tell all which I have not watched before but need to so I know if Evan is gonna ask for money from Chad to replace the shirt that he ripped hahahahahahahahah.  I don't know if I will blog about that so you will have to check back Wednesday morning to see.

at July 26, 2016
Email ThisBlogThis!Share to TwitterShare to FacebookShare to Pinterest
Labels: The Bachelorette