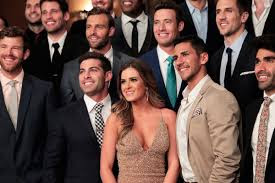 So after I missed the last episode and didn't have time to catch up I had decided that I was done with the show.   I find it hard to commit to watching 2 hours of this show and blog about it at the same time since I usually have bootcamp Monday night's and end up staying up much later then I like to since I run early Tuesday mornings.  Butttttttt it turns out I kinda missed it so here I am Monday night watching the bachelorette.  Not sure what happened 2 weeks ago so bear with me as I watch it...

Apparently they are in Argentina??  And there was some drama last week with the rose ceremony....damnnnnn I missed all that.

This week there are 4 dates - 3 one on ones and one group date and there are no more roses up for grabs for the one on ones but there is still a rose on the group date and this week if you get that rose you are going back to your hometown for a visit with JoJo.  How exciting.  "Hi Grandma, this is JoJo, no she is not my girlfriend but she might be my fiancee in a few weeks but it's still between me and 6 other guys."  So weird.

Alex is too weird to find normal with him.  Send him home JoJo.  He's a buddy not a hubby.  Move along.  Oh and now Alex is freestyling for Jojo and that has got to be his own because it sucked.  Big time.  It's so awkward watching these 2, there is clearly no connection at all.  She's even moaning in boredom haha.  She wants to turn Alex into a gaucho.  They say it is impossible and you can only be born one.  He looks ridiculous in that outfit.  I have no words, none.  I also don;t like JoJo's pants even a little bit.  Now they are on horses and are going to try to connect with the land and the horses. And then they show them holding hands while riding.  So cheesy.  Like who really does that??  And then he tells her that she looks like a Ralph Lauren model hahahaha he kills me.  Watching the real gauchos make the horse lay down on the ground was pretty incredible to watch.  I have never seen anything like that before.  Then they both lay down with the horse and they kiss and Alex is convinced that he is in love.  She was happy with her one on one date with Alex and her view changed of him.  These 2 have changed and are now back at the same place later that night for dinner complete with romantic argentinan music.  He tells her that he is falling in love with her and she tells him that this news does not excite her like it should.  This is awkward.  And she continues to tell them that she doesn't think she will ever get to that point where it could happen.  More awkwardness. He handles it pretty well and then she realizes she needs to send him home now beside it wasn't fair to him to stay there for the rest of the week knowing what he does.  This is a fair point and probably a good idea on her part.  He cuts her off when she is telling him this and he is a little upset.  I can't tell if he is angry or hurt or humiliated or all of them.  He wouldn't even look her in the eye to say goodbye.  He has a broken heart.  She's very upset and she doesn't know what she's doing which I find kinda odd but whatevs.

The boys on the bus are now "freestyle" rapping about Alex and I have to wonder how many takes it took for them to get it right.  There's no way those dudes came up with all of that.  Sorry friends, it's all scripted.  The dudes all agree that JoJo would have a much better time on the bus with them then on her one on one date with Alex and I have to say I agree.  Alex feels like the most boring person in the whole world.  I bet he doesn't even jay walk. They stop at a random bbq and are probably eating cow testicles like Jordan said.  He's picky about what he eats.  It's like we are soul mates hahahahaha.   I really want to like Luke more as I do think he is a serious contender but there is just something off about him and I can't place it just yet.

The boys arrived at their Argentinian country side home. The backyard pool looked incredible.  A date card showed up and the guys are all nervous.  Jordan gets the date and they are going to toast to love.  He is very excited while the other guys are defeated. The guys don't seem to like Jordan but that is because he is a front runner.  Him and Luke are for sure.  They are flying to Mendosa and going wine tasting.  Sounds like a good date to me.  She is excited because she does see a future with him. They squished grapes with their feet and then drank it.  Sounds kinda gross.  These 2 are now in swim suits in a hot tub or something in the middle of the vineyard.  He really wants her to meet his mama because she will love him.  She sounds surprised.  They are now back in civilization and ready to go out for supper.  He is talking about his family and how he has a great relationship with his parents, his older brother Luke but not so much with Aaron and he says that it is because that is the way Aaron has chosen to live life.  Jordan chose to remain close with his family.  They legit don't talk  at all.  So strange that AR is like that.  Glad I am not a packers fan because that would really disappoint me.  If I thought I loved Jordan before this, I sure do now.  He's a pretty sweet guy.  How can she choose anybody but him??  He just told her that he is so in love with her.....swooooooon....This makes her so happy and she kisses him but says nothing related back.

The boys are back at the house talking about how fast time is going.  They think Jordan is a front runner because his brother is Aaron Rodgers and that he gets box seats at the super bowl hahahaha.  So funny.  Another date card arrives and Chase, Robbie and James are going on the group date and they are going to let their love sore.  They are now jealous of Luke because he gets the last one on one date this week.  He is sure he is the front runner.  He's not wrong but I think Jordan is ahead of him.

Group date commences and it was supposed to be outside but it is raining there so they are forced in doors for their activities.  They have a massive suite full of food, activities and games.  It is the perfect slumber party she says.  James is shoving all the french fries in  his mouth and it is so disgusting to watch.  I would date this guy let alone marry him.  Now they are doing a massage train and then win lose or draw or maybe it was dictionary.  They played Truth or Dare and she dared one of the guys to run down the hall in his underwear.  Such a lame thing.  This whole date seems so juvenile to me.  Maybe I am just old.  I don't know but seriously.....let's move along.  Then they watch Brazillian Bachelor.  This date gets worse and worse.  I should just fast forward through this crap.  49 more minutes to go until it's over.....Now it is time to do some one on one's within the group dates.  Whoever gets the rose gets to take JoJo home for the hometown date.  I tune out to most of it because it kinda bores me.  I am excited about who gets the rose though.  Now they are fighting over the front runner and who it is.  I don't like Robbie too much and I doubt he is a front runner.  JoJo returns with the rose and gets all cheesy on us which is to be expected.  Damn Robbie got a rose.  So lame.  He's so arrogant.  Doesn't matter anyway, no way he wins. I fast forward through the post rose crap because I don't need to see JoJo + Robbie making out in the rain with lightening in the background or listen to 2 disappointed boys.

Luke and JoJo have their one on one date at a horse date,  which is very Texan which is where they both are from.  He could potentially give Jordan a run for his money.  I am tired at this point and bored of this so I apologize if my review gets scarce around this time.  I just find 2 hours is a long time to watch the same stuff over and over and over again. Now they are clay shooting.  It's like my nintendo days hahahaha.  But really I sucked at duck hunt.  She hits one and is giddy with excitement.  The music changes so you know it is about to get cheesy again.  She looks so pretty when she is not wearing so much make up, I wish she would wear less more often.  They could be a potential good fit.

Moving on shortly to the rose ceremony.  Someone goes home.  I think it is either James or Chase.  She doesn't want a cocktail party because she is confident with her decision.  The boys show up on horse and carriage which just might be the cheesiest thing I have seen on this show and that is saying a lot haha. JoJo walks in and gives a short speech and starts handing out roses.  She started with Luke  + Jordan which were obvious choices.  Then it comes down to the final rose.  Who is gonna get it??  Damn you suspenseful music.  Chase gets it and James goes home.  I figured it was gonna be him.

Until next week friends.

at July 12, 2016
Email ThisBlogThis!Share to TwitterShare to FacebookShare to Pinterest
Labels: The Bachelorette