Yesterday Penelope turned 6.  It did not start out well.  She stayed up too late the night before and woke herself up way too early resulting in several tantrums and time outs in bedrooms before it was even 9am.  She struggled for most of the morning but by the time we went out for lunch, she was in much better spirits. 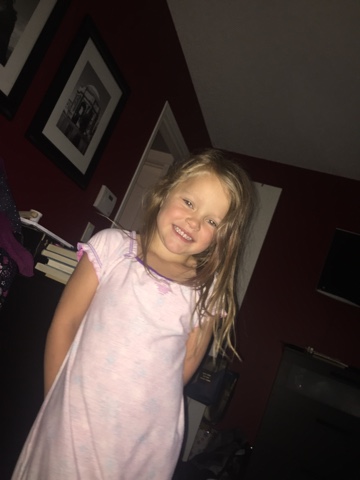 It's a tradition in our house to get a photo as soon you wake up in the morning.  Normally I wake them up early so I can get it but even Penelope was up too early for that. But she came into our room and I got her photo this way.  Notice her pyjamas are inside out.  She almost always wears them like this or backwards.  It is extremely rare to see her wear them the right way. 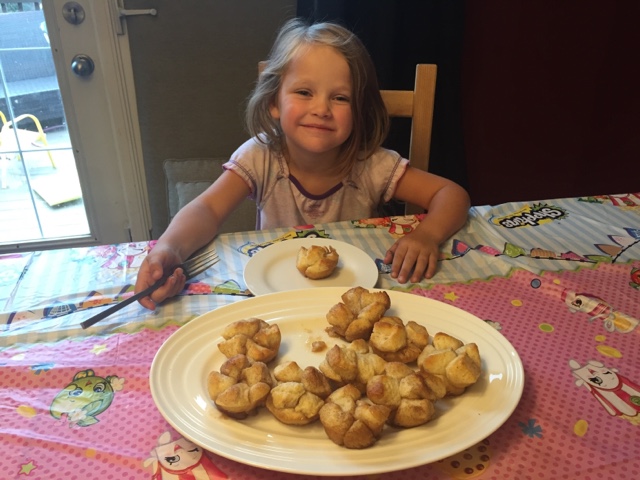 Also a tradition is a special breakfast.  It varies between homemade monkey bread and frozen waffles.  Finley loves frozen waffles haha which is great since she is normally in school on her birthday morning.  Penelope asked for money bread so that is what she got.  I make mine in cupcake pans instead of the big bundt pan as I find they cook better this way.

I also had a very bad headache on Penelope's birthday and the weather was too gross to do anything outside so they flipped between the olympics and disney junior while I tried to unsuccessfully sleep off my headache.  Eventually I decided I needed to just go on with my day despite feeling like crap because it was Penelope's day and we needed to celebrate that. 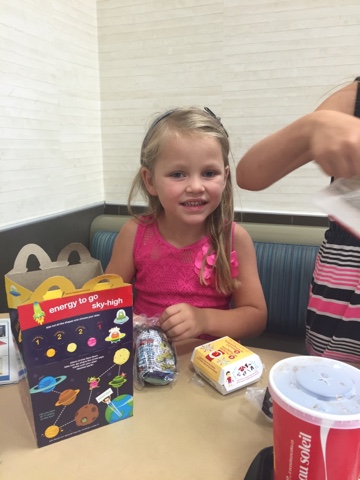 So we decided to go out for lunch even though we already had plans to go out for supper that night too.  I told her she could pick anywhere she wanted and she picked McDonald's because they had activity trackers and Greg accidentally washed hers in the washing machine after their backpacking trip last weekend.  Unfortunately, they had run out of the trackers and were giving out leftover stock of the crappy toys that didn't sell.  She was a little disappointed but she got over it quickly. 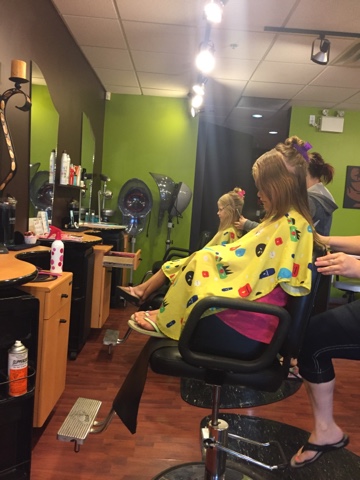 I then surprised the girls with new hair cuts at the neighbourhood hair salon.  They charge $21 for a cut and they have a $10 off kids cuts right now so it was super cheap and wayyyyy better then driving all the way to Beaners for a cut.  The stylists curled their hair and put sparkles in for no extra charge! It was great and super close and will be our new go to for hair cuts for them. 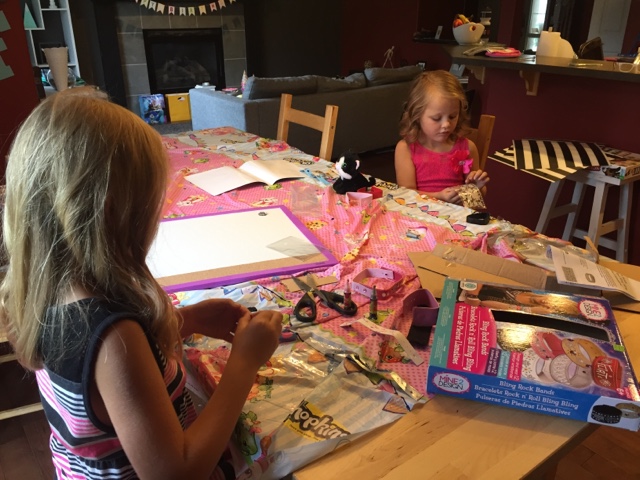 After lunch and hair cuts, it was raining outside so we came home and did a craft I had bought on clearance from Michaels in case the weather prevented Penelope from going to the beach like she had originally wanted.  It was a bling rock band bracelet kit and the girls loved it.  It kept them occupied for hours.  Well worth the $6 it cost me :) 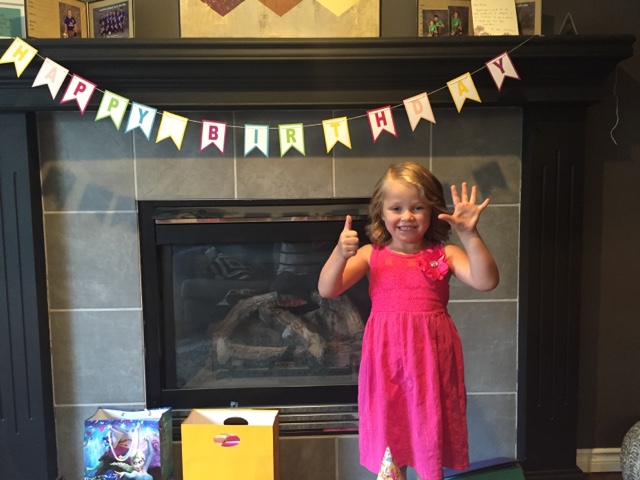 This is what 6 looks like with a fresh new cut.  It looks so cute with it curled but it will never be replicated again because I cannot do stuff like that and have it turn out.  The stylist used a straight iron to curl it and I watched her while she did it and though it looks easy, she said it was really hard to master haha.  I guess it is not something I will ever learn. 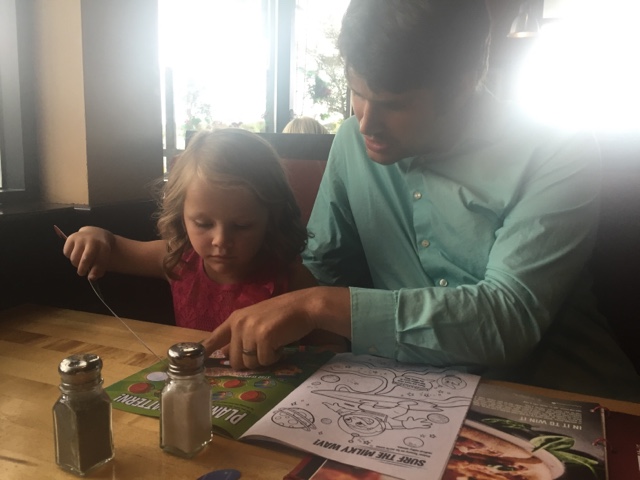 Penelope picked Boston Pizza for her birthday dinner.  I had really wanted her to pick somewhere else.  I even told her she could get her own butterscotch pudding at Ten Foot Henry but no dice.  She said she picks this place because it is the only time Greg and I willingly go there hahahaha. 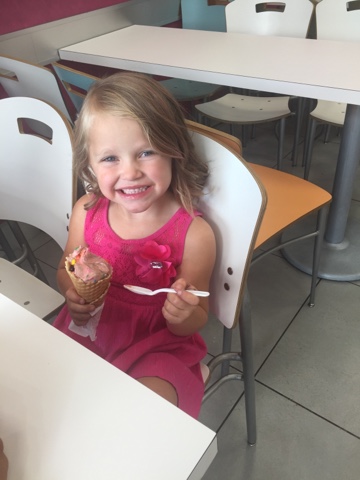 Our birthday day tradition is to go for ice cream at Marble Slab.  She picked a mix of bubble gum and chocolate birthday cake for her ice cream with sprinkles, reeses pieces and chocolate rocks.  She was very happy with her choice. 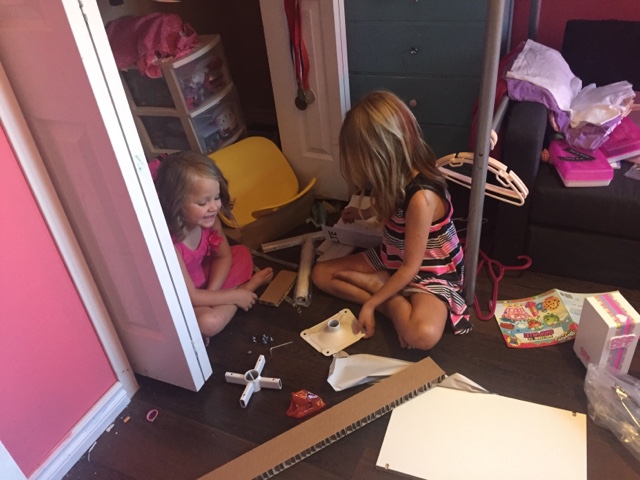 When we got home it was time to put her desk and chair together. It was alls he wanted for her birthday.  Greg built her desk and they attempted to build her chair with a lot of help for me.  Penelope wanted a gold desk chair but they don't seem to exist.  So we found yellow which she liked but still she says she would have preferred more sparkle. If I ever master the art of spray paint then I will spray it sparkly gold.

We asked Penelope what her favourite part of her day was and she said she couldn't decide because it was all so special.  This made me happy and washed away the guilt I felt from not feeling well that morning.  It just goes to show that as parents, we put far too much pressure on our selves to make it magical and it turns out it already was.  Glad you had a great day Sweet Pea!
at August 19, 2016
Email ThisBlogThis!Share to TwitterShare to FacebookShare to Pinterest
Labels: Birthday, Penelope