This past weekend we had tickets to Country Thunder here in Calgary and so my aunt and uncle took the girls for the whole weekend and we took advantage of it.

On Saturday morning, we slept in and then I went to run some errands before coming home and convincing Greg to go for a bike ride with me.  He wanted to go to Bragg Creek but I was afraid of all the hills I would have to bike up.  I like mountain biking but I like flat or down hill.  No up hill.  So I figured we were going to Fish Creek and would ride along the paved trails but he had other plans. 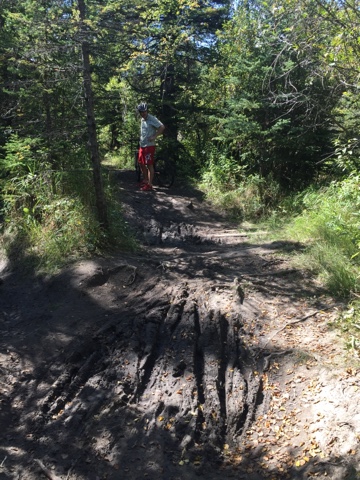 We did all the back trails which was a lot of mud, fallen trees, tree roots + stumps, cliffs and water.  I fell off my bike several times, ran into eroded cliffs and fell into bushes.  I have bruises, cuts and welts and a sore vagina from falling into the bar of the bike.  It was really fun but I do think I like the paved trails better.  But at least there was no big hills to go up. 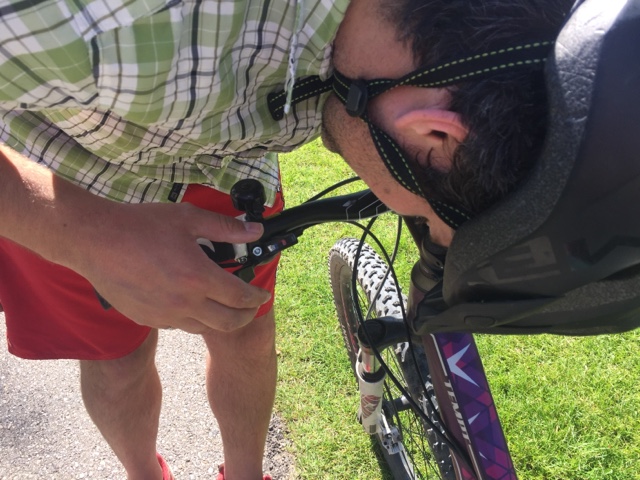 The left gear shift on my bike isn't shifting right.  I can go to 3 but when I go to 2 it is 1.  I just bought this bike a year ago so it is frustrating and to make things worse when I fell at some point it misaligned again making a very annoying sound when I pedalled forward but not backwards.  Greg tried to figure out what it was but it wasn't what he thought it could be so I am going to have to take it into Ridley's to get it serviced. 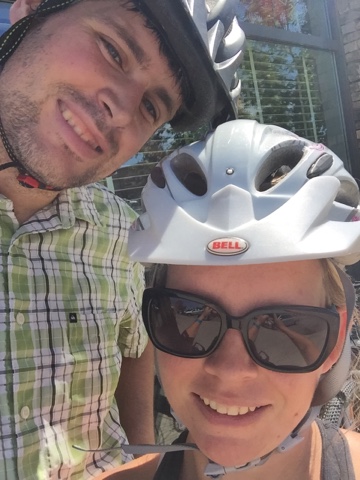 Post bike ride selfie which is very rare for Greg and I and it took a long time to convince Greg to even do this properly haha.  We were hungry and so we stopped at our neighbourhood pub Bull + Finch for brunch.  We have lived here for almost 9 years and had only been there once while I was pregnant with Finley.  They have a cheap brunch on weekends.  Greg got french toast and I had chicken fingers with fries.  It was delicious.  I also had a glass of Strongbow Gold and it was like apple juice in a bar.  It was so delicious and it was ice cold and tasted so good after a long hot bike ride.

We then came home and had naps and got ready to head to Country Thunder to see Tim McGraw.  It was a nice lazy afternoon after home. 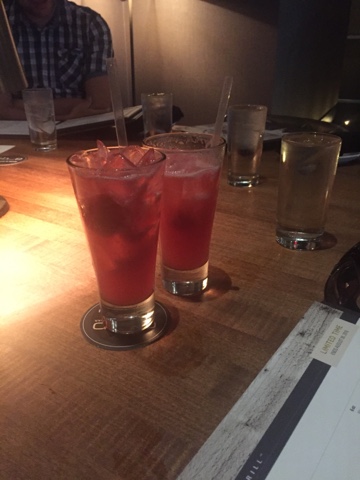 We met up with some friends that we were attending the festival with and had supper at Chop near Prairie Winds Park.  The steak was delicious, the lobster mash was awful but the Pink Lemonade alcoholic beverage was perhaps the single greatest thing I have ever had in my life - drink wise.  It contains raspberry liqueur, limoncello. lemonade, soda, and raspberry sorbet.  If I knew how to make this at home i would!!  I don't particularly care for chain restaurants but would go back to this one just for the drink alone.  Perhaps drinks next time I am at chinook shopping hahaha. 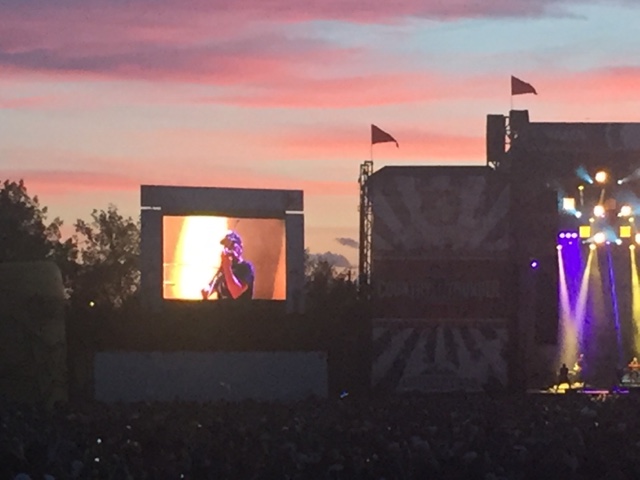 We got to Country Thunder while Chris Jensen was performing.  I didn't really know who he was but he sounded good.  Apparently when the festival started on Friday the lines were insane but we had no line up to get into the festival and none to use the washrooms either.  However the lines for booze and booze tickets was pretty crazy.  Tim McGraw put on an ok show.  He was so drunk that he slurred when he spoke to the crowd and he talked about how much money it cost to put his girls through college and Neal McCoy's hot wife.  It was so strange.  The music itself was alright, too much slow stuff for closing out the Saturday night portion of a festival. 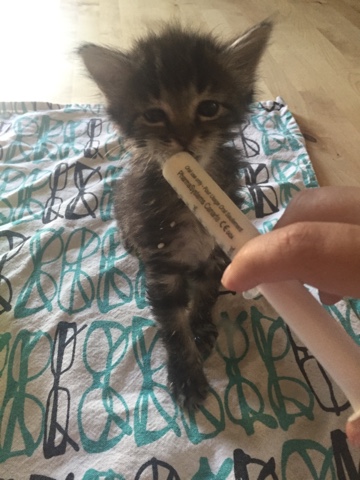 Saturday morning let us sleep in until 10am but we still had some parenting duties since Pizza still can't feed herself.  Well she can because she has slurped from a cup 2x but refuses to do to keep her fed and stuff haha.  She is lucky she is cute. 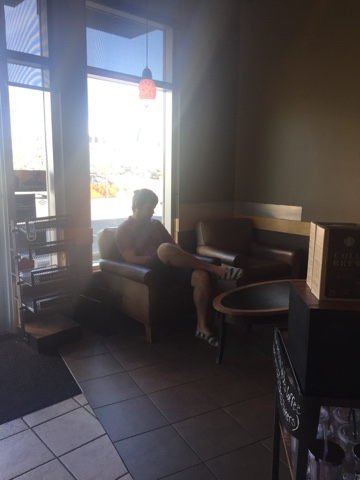 After we fed Pizza, Greg and I walked over to Starbucks for a coffee date.  Surprisingly enough he wasn't playing games on his phone but researching camping for the long weekend.  We wanted to head to Fernie but all the campgrounds were all full for the weekend so we are back to no plans for the long weekend haha. 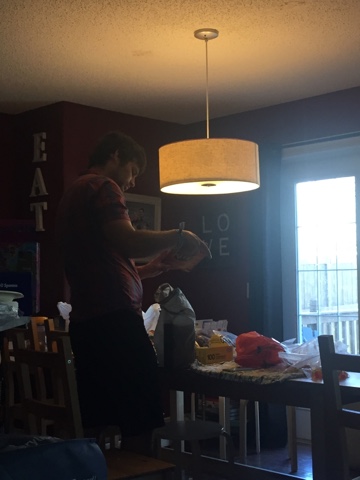 After breakfast, we headed to Superstore so Greg could get backpacking food for his and the girls upcoming 5 day backpacking trip near Jasper.  Then he packed and weighed all the foods and sorted them into 5 day packages and stuff.  I was supposed to go on this trip but I bailed because I was out of my mind even agreeing to go on this kinda trip for my first time ever backpack trip.  They leave next Friday in the afternoon and come back on the 31st, which is the day before school starts.  We sure didn't plan this right.  So I have 5 whole days to my self.  I am a little sad though since this will mark the third weekend in a row that I am away from them. 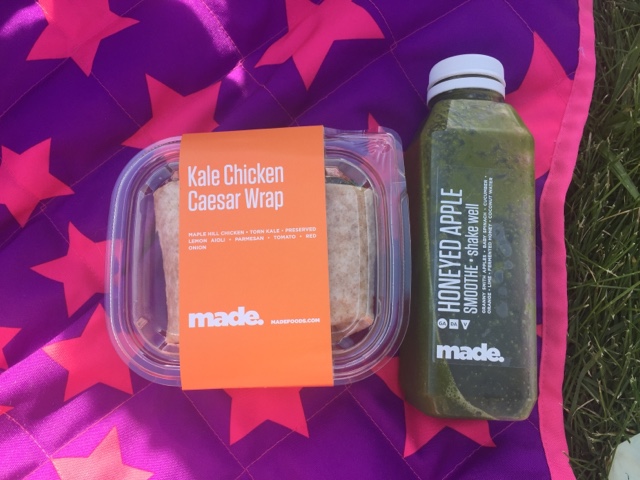 We headed down to Country Thunder earlier on Sunday then we had on Saturday because we wanted to see Chad Brownlee and Dustin Lynch perform so we had a late lunch/early supper from the made food truck.  It was so nice to have a healthy option at the festival.  You can check them out at madefoods.com.  I have no idea where they hang out otherwise but if you see them, I highly recommend you check them out.

Chad Brownlee and Dustin Lynch were amazing.  Dustin Lynch was so funny.  He said he normally gets to perform 30 minutes a night opening up for Luke Bryan but tonight he had 90 minutes and he had no idea how he was going to fill all the time because  he doesn't have enough original music to fill the time.  So he did a bunch of cover medleys and they were really good and all realms of music too.

Soon though it was time for Luke Bryan..... 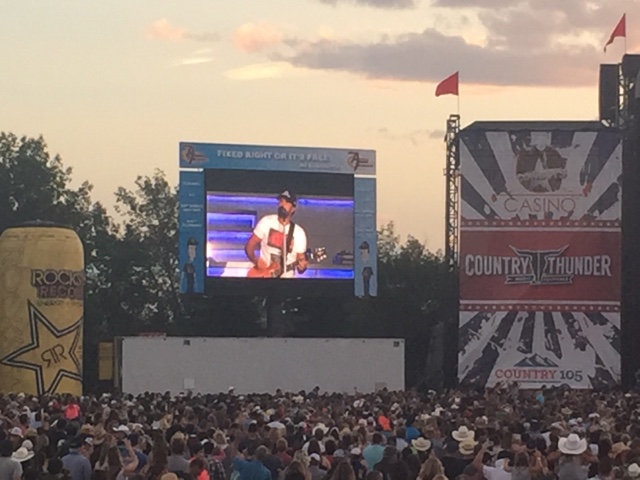 And he did not disappoint.  From the first song to the last, he was amazing.  We did not want this night to end hahahaha.  He played all his great songs, interacted with the crowd and was a million times better then Tim McGraw the previous night.  The crowd was so engaged and you could tell how much more the audience was enjoying it.  It was an hour and forty five minutes of pure bliss and great country music.  He loves playing and performing and it really showed through.  I was very jealous of all those so close to the front but most of them had been there since the gates opened and there was no way I was doing that and I am not aggressive enough to push my way to the front.

It was a fantastic weekend full of dates with Greg and great times with friends down at Prairie Winds.    I am already looking forward to next year even if Blake Shelton is one of the performers hahaha.
at August 23, 2016
Email ThisBlogThis!Share to TwitterShare to FacebookShare to Pinterest
Labels: BikeYYC, Country Thunder Festival, Fish Creek Provincial Park, Luke Bryan