Since I am running the SeaWheeze tomorrow in Vancouver, I thought I would do a post on some of my favourite running "accessories" so to speak - not the shoes or the clothes but things that are just as important, if not more so.

ONE: KT Tape is not something that I like to use but have no choice at the moment.  Lots of times, using it becomes psychological rather then a necessity which was the case for me last summer.  I had starting using it the summer before and because I had such good results with it, I refused to take it off.  But during SeaWheeze 2015, I used some cream that I got from my brother in law and then put the tape over top of it without giving it another thought.  A few km into my race the tape started falling off and I started panicking.  I made the realization that I had to pull it all off and hope for the best.  It turns out I didn't need it after all and finished with a PR.  I went another 8 months without using it, but this spring, my right hip was pretty weak and causing havoc on the rest of my right leg.  I found that taping it up kept my knee in place while I ran and eliminated all the pain.  So the tape remains on my knee as we speak.  I tried running in July without it and my knee hurt for several days after so I think I will keep it on until after the Harvest Half in October and maybe start seeing if I can run without it.  It is very expensive - $23 a roll which works out to be $2 a run.  I try to keep it on as long as possible which has given me ugly tan lines on my right leg and questions from literally every person I encounter who is not a runner or an athlete of some kind who uses it.  Every once in awhile, Shoppers Drug Mart has it on sale for $19 a roll. 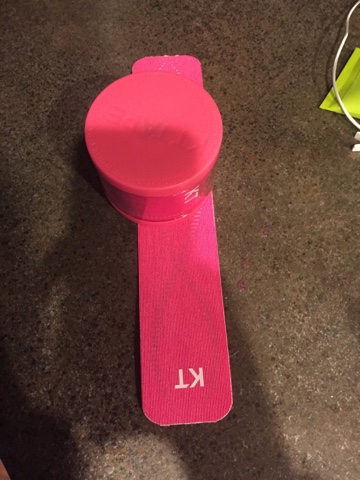 TWO: Chafing and blisters can be a problem for runners.  You can get blisters on basically any point on your feet and you can chafe on your thighs, under your arms, on your chest and your feet if they get wet.  I have never experienced blisters on my feet until I ran the Banff Marathon in June.  I had blisters on my toes on both feet and a massive blister on the ball of my right foot.  Now I am a notorious toe runner but I have never ever gotten blisters there before.  The shoes were the same I always wear and have been wearing for years and I had switched to a new pair in May and got more then enough training runs in them before my half.  I normally wear the Lululemon Speed Socks so after the race, I ordered a pair of High Speed Socks because they were denser and provided more cushioning.  I ran 14km in them the following week and they just made my toes cramp but no blisters.  The following week I did 16 and I got blisters so somebody suggested getting SKIN and rubbing it all over my feet.  It seemed to work for shorter runs but when I ran 22km a few weeks ago, the blisters were back on the ball of my right foot.  It wasn't as bad as the blister from Banff but I was going much slower too since it was a training run.  This retails for about $12 I think or somewhere in that ballpark and you can purchase it at the Running Room, Sportchek and other running stores I am sure.

Somebody on the SeaWheeze Chat Facebook group suggested 2Toms for chafing since it stayed on wayyyyyy longer then SKIN and was water and sweat resistant and it was roll on.  It is hit and miss on whether I chafe between my thighs and I have yet to figure out what makes me do it and what I do differently when I don't.  So far I have come up with zero theories.  I tried this on my 22km run and no chafing.  Although to be fair, I don't know if it is because of this or because I just didn't chafe that day.  Regardless, I will keep using this product until I do haha.  This I could only find on Amazon and at the Running Room for $13.99. 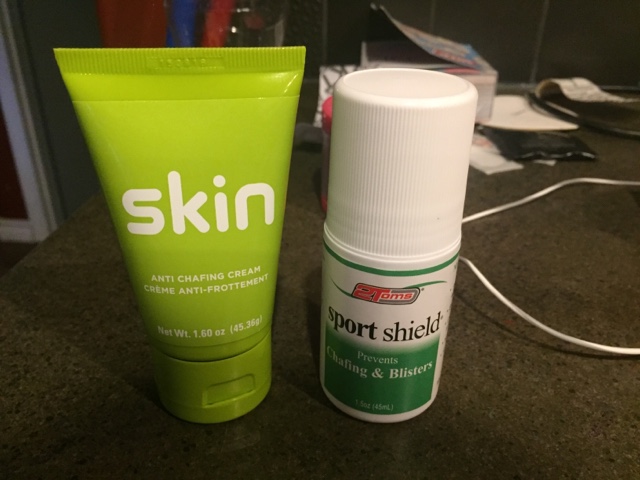 THREE: I have two of these yoga blocks.  One in my bedroom and one that splits its time between my basement workout area (which admittedly has been empty of late) and my main floor where I do most of my stretching while supper is cooking.  I buy them at Winners for $6 each so nice and cheap. I use this to stretch my calves out.  So I lay it like it is shown here in the photo and then I lean into the  block with my foot so the toes are on top and the heel on the floor.  You can keep it there for a minimum of :30 up to at least 3 minutes ideally but longer if you need.  It's one of my favourites.  Alternatively, you can do this on the stairs but I find if I rely on the stairs I just forget to do it.  Another option instead of yoga block is some library book (s). 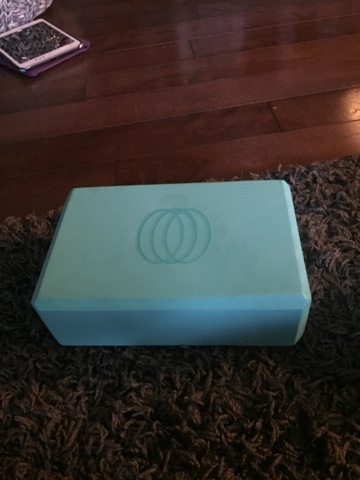 FOUR: Here we have my resistance bands.  I buy both of these on ebay and i buy the cheapest i can find with free shipping.  I pay about $1USD for each one.  I buy in bulk because Luci likes to chew through them.  You can buy them at Winners in pretty colours but they only sell the long bands and not the loops and they sell them 3 for $13 usually.  I prefer cheaper hahaha.

The long band I use for stretching my hamstrings, calves and occasionally my quads but mostly I use it for my hamstring stretch.  I lay on my back, put the middle of the band around the middle of one foot and then pull the leg towards your chest while keeping your back on the floor.  The closer you get the leg to you, the bigger the stretch.  Hold for as long as you can before switching legs and repeating. 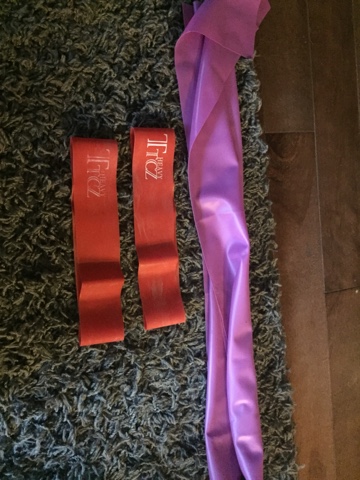 FIVE: Foam rollers.  Where do I begin with how important these are.  Even if you aren't sore post run or the days following a run, still roll out so that you will never be.  I love my foam roller and I travel with it everywhere.  I have 2 of them - a basic long one and a three in one roller that has the solid roller, the jagged roller and then the really hard roller.  I never use the yellow jagged like roller ever and I only use the hard black plastic when my calves are super tight and usually Greg does that and you can hear me moaning and screaming in agony when he does.  The pain is intense and will bring you to tears but trust it will feel worth it later on.

The blue foam rollers I use religiously on my it band and my quads.  I don't use it really for anything else but you can use it for many other body parts and muscles.  You can buy them pretty much anywhere including the running room, walmart and winners and range in price from $20 - $50. 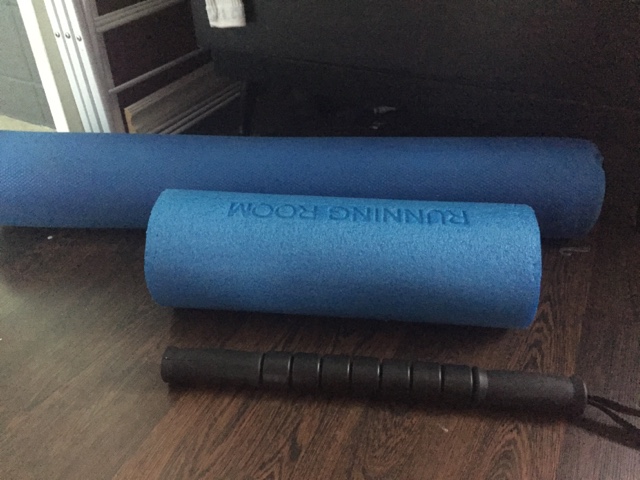 SIX:  These 2 are my most favourite tools right now - my orb and my lacrosse ball.  The orb you can purchase at the Running Room for $21 (sometimes they will randomly give you 10% off which happened when I bought this last summer) and the lacrosse ball I bought at Source For Sports in Okotoks for $5.  I mostly uses the orb for sitting on to work out the tightness in my glutes and hips.  I can sometimes sit for hours on it while watching tv.  The lacrosse ball I use for the same thing as the orb but because it is smaller it goes deeper and it is amazing.  I also use to get deeper into my it band, my pirformis, behind my knee where it reaches my upper calf and lower hamstring and most recently I have been laying on the floor with this spot just above and to the left of my knee and getting that lacrosse ball as deep as I can get it.  It has been a lifesaver.  I can't imagine not having my lacrosse ball. 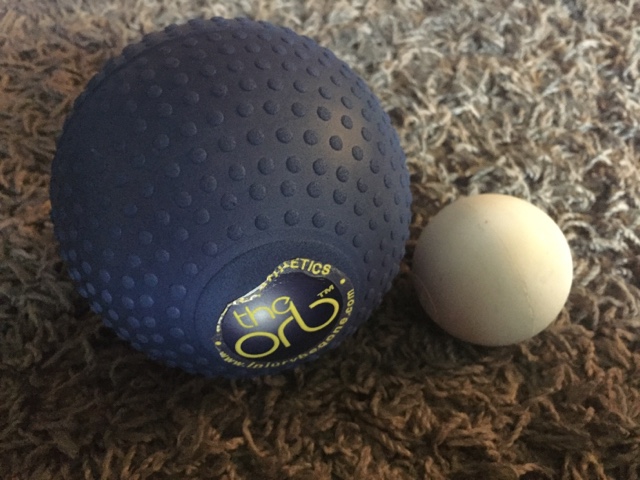 So that concludes my post on some of my favourite running accessories.  What are some of your can't live withou?
at August 12, 2016
Email ThisBlogThis!Share to TwitterShare to FacebookShare to Pinterest
Labels: 2Toms Sport Shield, Altra Runners, Foam Roller, KT Tape, Lacrosse Ball, RunCalgary, Running, Running Room, RunYYC, Skin Body Glide, The Orb