I have hated Uniquely Becky basically since I created it back in December, I was just really too lazy to do anything about it.  But for some reason, I decided this past Sunday felt like as good a day to change it all up.  I was and still am recovering from an UTI and because my back and stomach are still sore from the pain we all took it easy on Sunday and enjoyed the Olympics on CBC.    The longest and hardest part of the process was trying to come up with a new and creative name that encapsulates what I wanted this blog to be about and what it is about.  I would come up with something and it would be taken. This process continually repeated itself throughout the afternoon and into the evening.

I read articles on naming your blog and wrote down keywords that I blogged about and came up with the following:

There were a few others that were available but I didn't like them and I must have really not liked them because I can't even remember what they were.  I had almost settled on "Our Simple Adventures" but with YYC on the end of the URL because it was taken and I was in Canva trying to make a new header for my blog when I saw one of their examples was called "Sweet Little Chronicles" or something like that with a picture of a cupcake and I loved it.

It set the wheels rolling in my head and I soon came up with using sweat as a play on sweet.  My first thought was Crazy Sweaty Cool instead of the saying (I think??) of Crazy Sexy Cool but I didn't really like it.  While I don't deny that I am crazy, I doubt very much I am considered cool haha.  I liked The Sweat Life but Lululemon uses that as one of their hashtags so I didn't want to appear lame and unoriginal by using that plus on Instagram, there is a cool account called The Sweat Life based out of NYC that I quite enjoy so I didn't want to copy them and the Insta handle My Sweat Life was taken too.  Then I came up with 2 possibilities: Becky's Sweat Life or Sweat Like Becky both of which were available on blogger.  Both were again a play on sweet and I liked them.  My preference was Sweat Like Becky because it was catchier and because is was worried the 2 s's in the other back to back might mess people up and then they not be able to find it so I texted Kristen and asked her and she agreed with me that Sweat Like Becky was the better of the two.  Sweat Like Becky was born.  I liked SWEAT because I sweat when running, doing bootcamp, hiking, biking and all that other fun stuff.  It worked really well to show what this blog was all about.

But now, how was I going to get the two blogs to merge? Three obvious ways to do this is to:

So after combing though google help, I couldn't find a single topic related to what I wanted to do.  I had my existing blog at uniquely becky and my new blog at sweat like becky.  Both had been created using the blogger platform.  I wanted to be able to tell my readers that on such and such a date, the address would be changed to the new name and I could just change it by somehow just importing the new blog's url only.  I am not sure if that even makes sense to you but thankfully when I created a post on the google help forum, the expert as he is known, knew what I wanted to do and sent me the instructions to do so HERE

The problem was that I was so confused and didn't understand what he meant.  Greg was beside me watching the Olympics and he looked at it for me and then drew this design for me to see visually since I wasn't understanding what he was saying either: 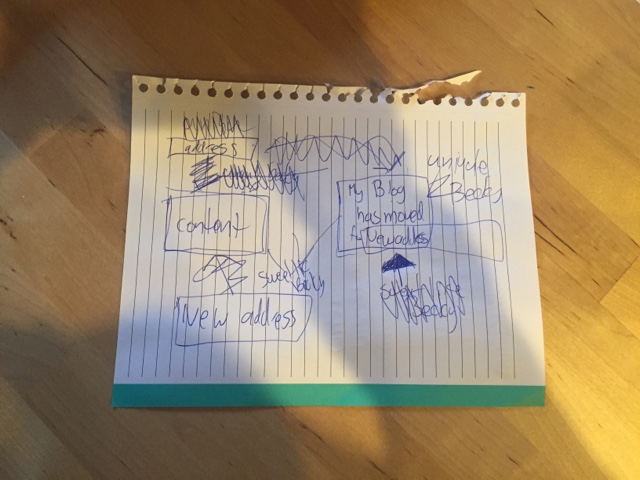 But finally I figured out that this was what I had to do:

Then I went to Twitter and Instagram and changed my handle to SweatLikeBecky so that it matched my new blog.

But now it came to change my blog header and just as I was overwhelmed with the thought of my own domain, the same rang true for blogging and header templates.  It took me forever to make the uniquely becky one and I couldn't even remember how to do it haha.  So I went to pinterest and searched blogger header how to's and then blogger templates and came to one I liked that I could purchase on Etsy but it was ridiculously expensive but it gave me the idea to check out Etsy to see if I found anything I liked it in a more reasonable price range.  So I opened up Etsy and set my parameters from $0 to $15 and searched blogger templates.  I found a few I liked and a lot I didn't like but that was to be expected with my very low budget.  I still wasn't convinced that I wanted to spend any money on the blog so I went back to Pinterest and searched free blogger templates.  I knew they existed because when I first started my blog I used a few sites that had free blogger templates, headers and backgrounds but they were stuck in the 90s and hadn't evolved to what I wanted in my blog these days.  I came across a pin that had what looked to be what I wanted in a blog template so I clicked on it and it took me to their site here:  Pish and Posh Designs and they had both custom templates and freebies.  I signed up for their freebies and downloaded the free feminine blogger template.  I had tried doing something like this before, but this time I actually followed the instructions and it worked.  I was happy with it but I didn't love the font of the header so I changed that to one I found in PicMonkey.  And then I switched the order of how things displayed on the right hand side.  The only thing I wish it did that it doesn't do, is have the "read more" option at the bottom of each post that you can hit if you want to read more.  I see it on more and more blogs and I really like that feature.  Maybe eventually I will find a template that I like that has that too.  In the meantime, this will do :)

I am definitely much happier with the name of my blog now.  It takes such a long time to find out what your niche is, at least in my case anyways.  I never really felt Uniquely Becky was what I was about and feel that Sweat Like Becky really is.  It kinda goes with my motto "Don't sweat the small stuff" right?? The template and layout and design may change, but this time Sweat Like Becky is here to stay.  And as I was writing this out on Monday morning, FedEx dropped off my Lululemon shipment and I ordered a pair of Run Course Ultimate Padded Sock in hopes that would help the sudden blisters on my right foot.  Every pair of socks, or at least the running socks since that is all I buy, has writing on the inside of the sock.  This pair in particular had "run hard" on one and "get sweaty" on the other.  It was meant to be :)
at August 09, 2016
Email ThisBlogThis!Share to TwitterShare to FacebookShare to Pinterest
Labels: Blog, Google Help, Sweat Like Becky