On Saturday night, Greg went over to our friends' house for beers and to build a patio set.  While there, they could hear kittens and/or cats meowing but couldn't find where the meows were coming from.  Greg came home and told me about it and then thought nothing more of it.  While Greg was out getting groceries, his friend texted him that he found 4 kittens underneath his shed without their mama.  Pictures were taken and Greg forwarded them to me and I absolutely had to have one.  I have been wanting another cat off and on for about a year.  I was still sad about Quincy running away more then 3 years ago but I thought Luci would like the friend and I knew the girls would love it. But for whatever reason, I just couldn't pull the trigger on one. 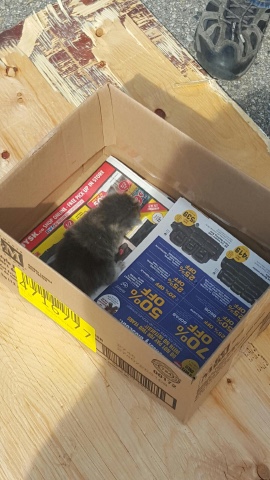 This is how the kitties were transported to our house.  They were super cuddly and were basically all on top of each other.  It was the cutest thing.  The first cat we picked from the box was quite big and very loud.  Greg thought it might be a girl so we put it back.  The next cat we picked up was the kitty we ended up picking to keep.  The other 2 were really small and seemed to be more lethargic then this one and the other one that I called the alpha male.  Our kitty appeared to be the quiet one but that just hopeful thinking on our part  haha. 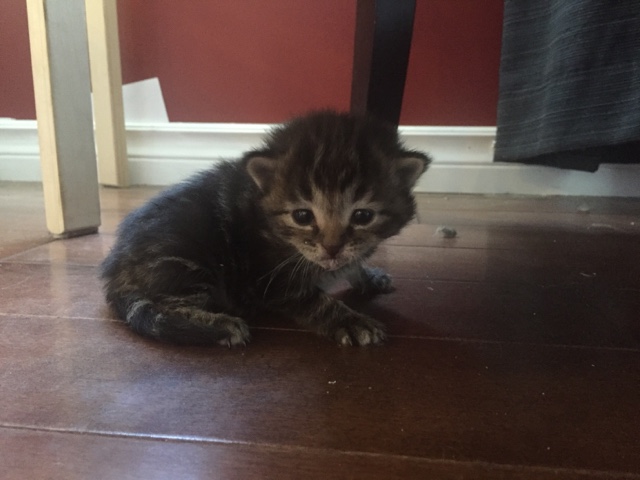 Pizza was terrified after her siblings left.  She/He shivered in fear and probably coldness too since it no longer had their cuddle buddies.  We googled kitties and guestimated that it was about 2 weeks old since it was able to walk and their eyes were opened. 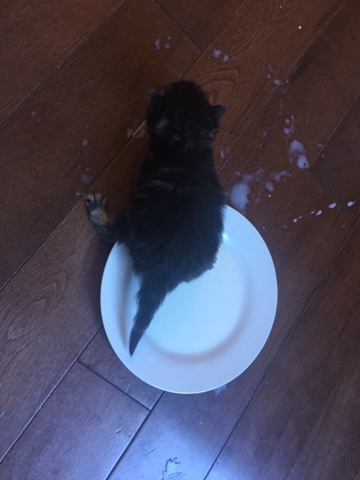 The kitty appeared to be hungry and we were not sure how long they had gone without being fed so we gave it some cow's milk in a plate and he did not understand what it was and just walked through it.  This remains true even today.  I don't know when they teach themselves to lick from a bowl but I hope it is soon. 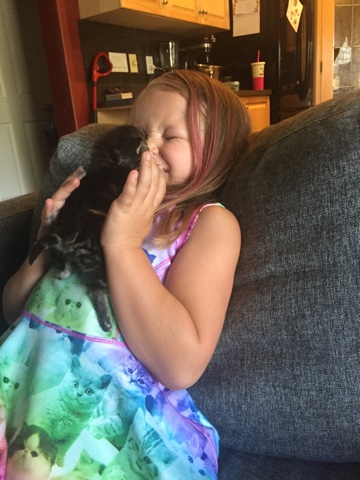 Penelope loved Pizza and Pizza loved her kitty dress.  When Greg and Finley went to get kitty formula and a syringe, I could hear Penelope talking to Pizza saying "who's a cute little pizza" repeatedly.  It was the sweetest thing. 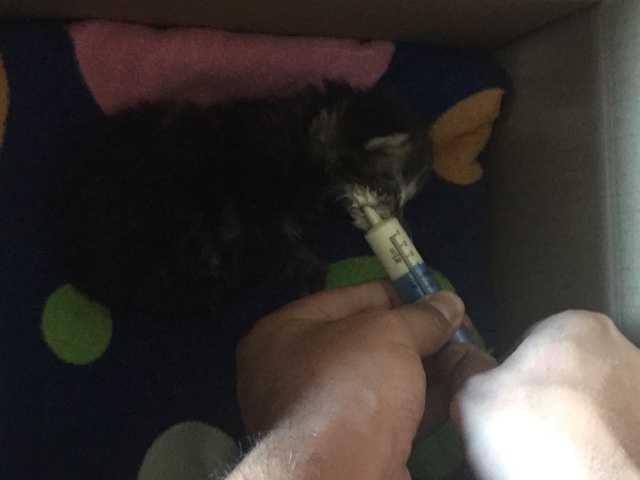 We bought some kitty formulate at the pet store and got a syringe from the pharmacy at Sobeys.  Pizza did not like it and it was a struggle to get milk in it.  Most of the milk was on her.  Eventually she got the hang of it.  I am not sure how much she drank that first day.  Our goal is 80ml a day which he has met and/or surpassed these last 2 days. 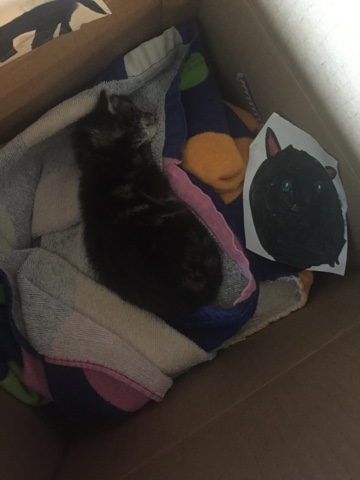 This is the little home we made for Pizza.  It's her sleeping area, her safe area, her kennel when we are not home, where he hangs out when we can't keep an eye on him.  We have towels in there for him, and the girls drew pictures of him to hang in there.  He has spent most of his weeks alive in the dark so the light is tough on him. 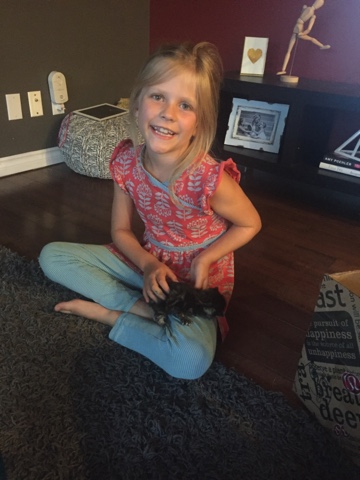 Finley is so happy that she has a kitty that likes to cuddle.  Pizza likes to dig into you and crawl into the strangest places like he would if he were still with his mama.  She loves to play with the kitty all the time. 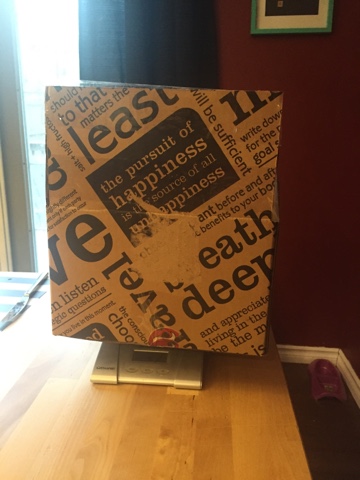 Every day we have to weigh Pizza and ensure that they are gaining at least 10g per day.  On Sunday, Pizza weighed 225g and 240g on Tuesday and 262g yesterday.  Yesterday also marked the first time she pooped on her own.  Her poop is funny looking.  It looks like soft rabbit poop  haha. 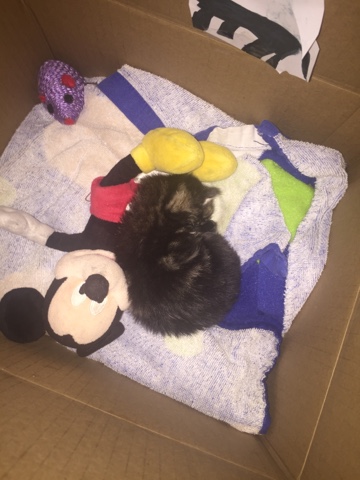 We were pretty sure that Pizza missed her siblings a lot and her mom too and we thought that bedtime might be tough on him.  Penelope went and got mickey mouse and put it in her box for her to sleep with.  He slept beside and/or on top of Mickey the whole night.  He slept from 830pm to 8am the first night and the second night he slept from about 9pm to 530am. 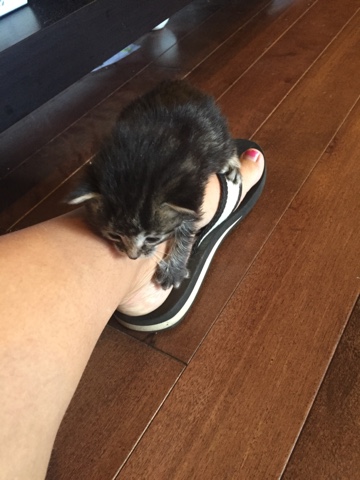 On Tuesday I called our vet and spoke to the vet tech and told her Pizza's story.  She estimated that Pizza was already 4 weeks old based on how much she weighed, how much she was eating and how mobile she was.  We still don't know if it is a boy or a girl so I kinda go in-between the he/she thing which annoys me haha. We are hoping for a boy kitty.  He has started climbing yesterday although not much and started licking himself on his paws and legs.  He also does this thing that Quincy used to do where he pushes his front legs into something and purrs.  So maybe it is a boy?? Luci doesn't do this.  He doesn't have teeth but they are forming and it still hurts when he bites.  Her claws do too.  He loves snuggling - especially right in your neck.  Quincy was also like that as a kitten and even as he got older he was the cuddliest cat ever. 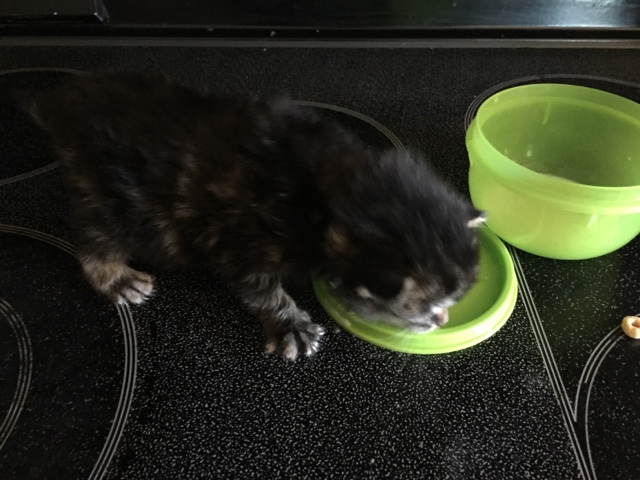 Yesterday I bought some goat's milk for Pizza in hopes of saucer training him.  He had no part of that but he loved the goats milk.  We are mixing goats milk and formula starting today because goats milk isn't as calorie dense as the formula and we would have to feed him twice as much and I don't really want to do that.  Hopefully soon he will be saucer trained. 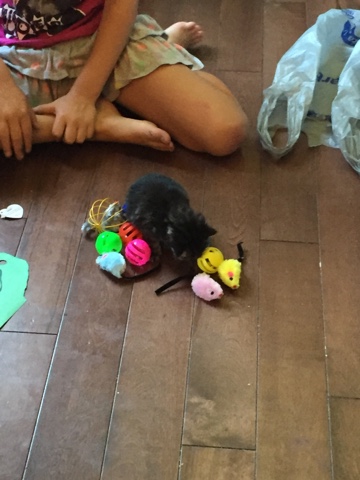 Yesterday, we went to dollarama to buy some toys for Pizza and a toy for Luci.  Luci is not adapting well to the new kitty but she is getting better.  She wouldn't even be on the same floor as Pizza Sunday or Monday but yesterday she still had no interest in the kitty but she didn't bolt for the basement either.  I said to Luci now you know how Quincy felt when you showed up,  Quincy hated Luci until the day he ran away but Luci loved him so much.  I wonder this new relationship will be he same.  Pizza really isn't in to toys quite yet.  The girls made him a swinging pizza face one that he will walk behind and slap but that is it.  The girls took him on a treasure hunt for his toys and he was so tired that I fed him and put him in his box and he slept for hours. 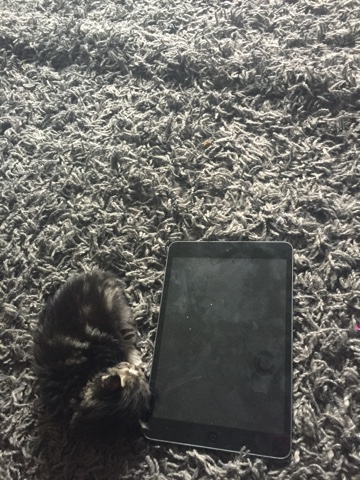 Pizza sleeps only in his box and roams around when he is out of it.  His walk is funny because he kinda waddles since he just learned how to walk most likely and he is adjusting still to having light all he time.  So later yesterday afternoon, I sat down some tea and a book and hoped that he would come sleep beside me and he did so I grabbed my iPad mini to do a picture of size comparison. I am going to try to do a photo like this with him as long as he cooperates!

We are pretty excited to have Pizza in our lives despite the amount of work he is in the early days.  We are just happy that he seems to be healthy and adjusting well.  We created an instagram account for Pizza and the handle is @pizzathecatyyc.  The girls love taking photos with their iPads and having them on the account.  So you can follow his daily life there or you can check back here every wednesday for an update on him.  Or her. :)
at August 03, 2016
Email ThisBlogThis!Share to TwitterShare to FacebookShare to Pinterest
Labels: Calgary, Pizza The Cat, Rescue Cat, YYC