There is no Fit Week In Review this week since I was in Vancouver Thursday until today.  I will kinda include whatever I did last week in that post maybe.  It was probably just some stretching, rolling and strengthening on Monday and Wednesday and a short, fast run on Tuesday because I write this post, that is what I plan to do prior to leaving for my trip.

A few weeks ago after I ran a record 22km (yay me!!) we headed to South Glenmore Park so I could keep my legs moving and not have them stiffen up.  Recovery time is so much better if you choose to be active after being active even when you don't want to be active.  Your body will thank you later trust me.  I have learned from experience. 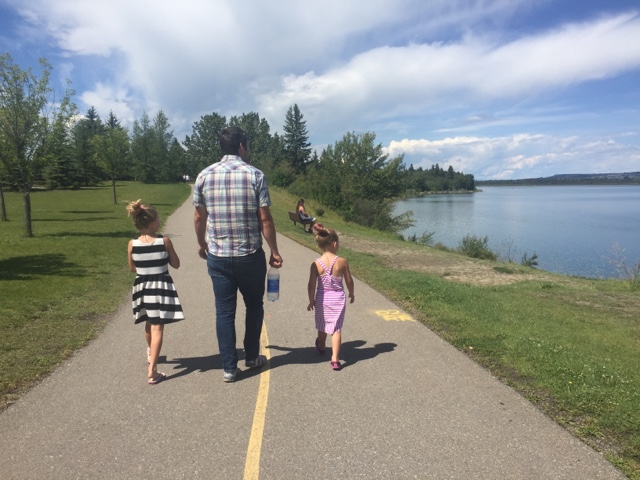 We started on the paved trail that everybody takes.  It is always full of cyclists, runners, families going for walks and, more recently, pokemoning.  Penelope did not want to be here so the pokemon helped keep her happy although I am beginning to think it might be a ploy for her to play more pokemon.   It was a beautiful warm day outside and the park was so busy.  It was even hard to find  parking spot but we lucked out.  The sun was very hot and I was very thirsty and I was worried I might not survive a long hot walk but we found a gravel path that took us along the water's edge instead of the paved, hot path above. 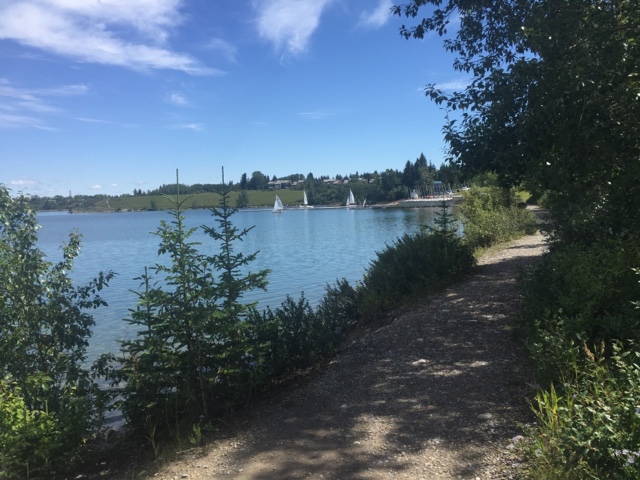 It's hard to say where this path actually started because I don't remember and I kind of just followed Greg and the girls.  I was tired obviously so I was lagging somewhat behind them.  But I took this photo so you could kinda see where we were.  Close enough to still see the marina and kinda where the path begins.  I assume it would be easy to spot the gravel path when walking on the paved path.  I will have to check next time we go back. 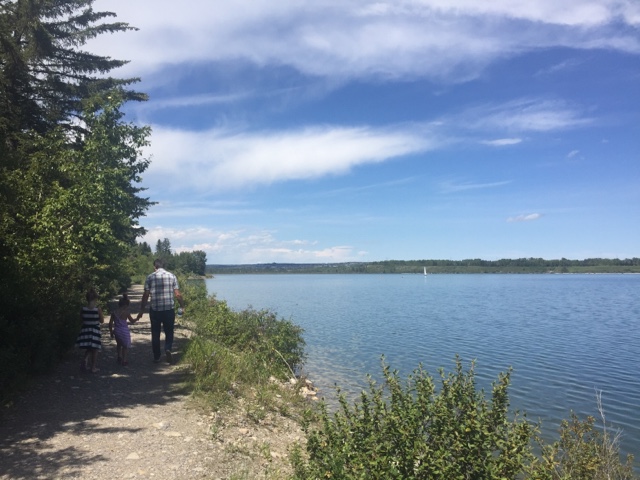 The path was nice and shaded which left us quite cool and with some great views of the reservoir. We saw sail boats, kayaks and canoes.  It was just as busy in the water as it was on the paths.  I love seeing so many people out and about in parks being active and enjoying themselves.  Unfortunately, there were no pokemon down where we were - apparently they were all on the paved trail. I guess pokemons don't like adventures hahah.  This made Penelope upset but she dealt with it pretty well.  Mostly with the idea that we would take the paved way back and she could start collecting pokemon again. Whatever works right?? 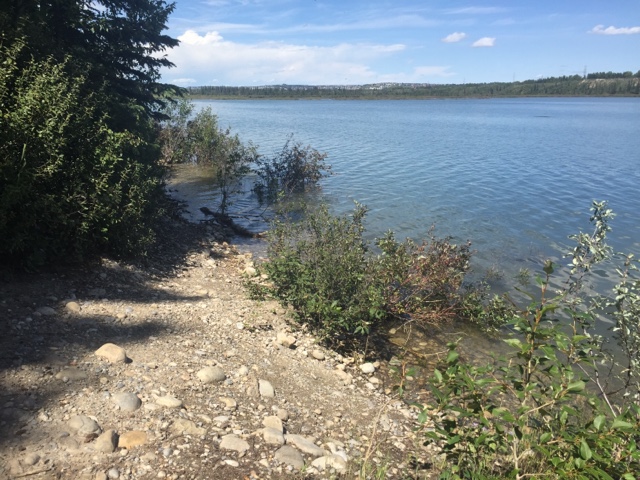 Soon our nice scenic gravel trail ended and we had to start going back up.  I was sad for it to end.  We should have turned around walked back along this trail but Penelope wanted to Pokemon.  I am betting if you asked her now she would also want to do this trail again.... 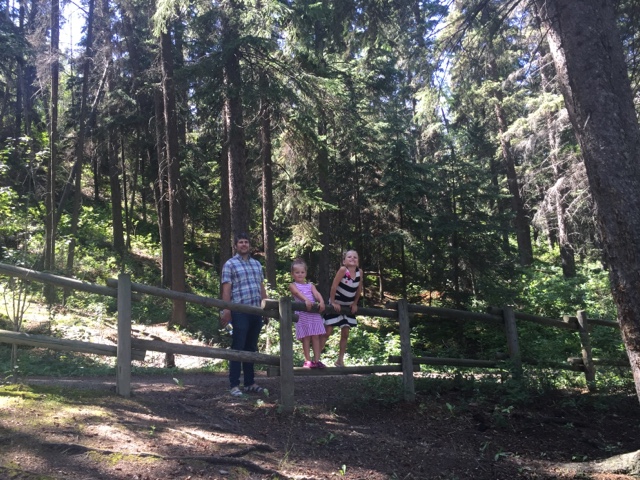 The path up we thought looked really good.  There were good paths to walk on, it wasn't too hilly and there were so many tall trees that you were shaded from the sun and heat.  But there were no signs and so you weren't really sure where to go.  Here where this photo was taken, you could go right or you could go left and I chose right and I think we should have chose left.  I think it would have been easier but I am not 100% certain.  But regardless, I am glad we got this great photo of Greg and the girls.  We eventually decided to finally go left and head back towards the car but not before seeing the marsh of where the river meets the reservoir.  We wanted to go left here because we didn't want to get into the weaselhead area because none of us wanted to climb gigantic hills. 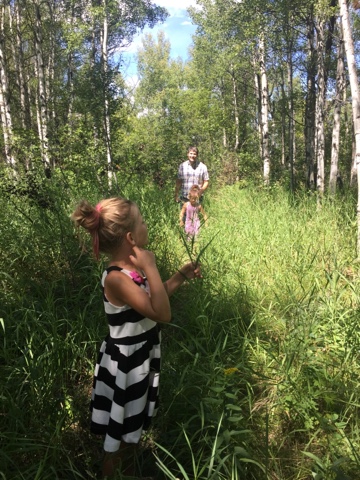 However, by choosing to go left and start walk in the direction of the parking lot and hopefully access to the paved trail we lost our nice patted down trail and entered into a very narrow trail surrounded by very tall grass.  It was itchy and annoying and there were mosquitos and other random bugs and we all hated it except for Greg, he liked it.  And Finley might have too because she tends to like whatever Greg does haha.  It was a long trail and it was very hot as it was wide open with no trees for shade.

Eventually though I found a sign and realized that meant the paved path was finally close. 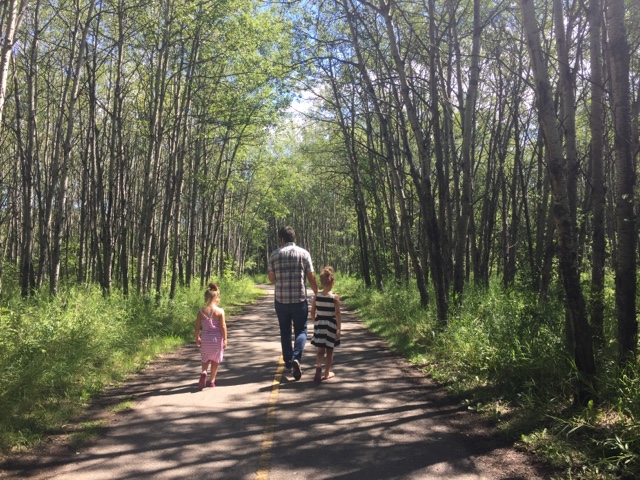 And we were all happy that our first section out of our tall tall grass was lined with tall tall trees blocking the sun.  This is actually one of my favourite sections of the walk way around the reservoir.  There is just something so calming about being surrounded by tall trees.  The girls were happy that they could pokemon but I have no idea if they found anything or not.  I can't remember and I try to pay as little attention as possible to it haha. 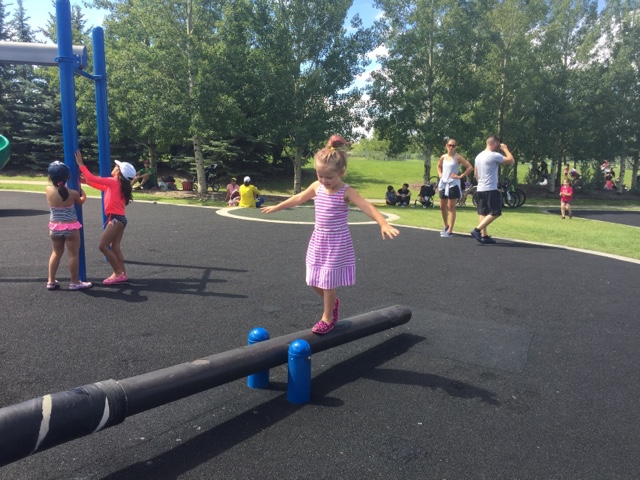 We promised the girls that we could play at the park when we made it back.  Finley hit the swings and Penelope went for the balance beam before they traded off.  It was crazy busy here and the spray park was even more insane.  So many people.  Maybe if it ever quits raining, we can come back on a weekday when it might not be so busy.

We really enjoyed the unconventional way that we did South Glenmore Park that afternoon.  We only encountered one other family on the trail, we got to be close to the water and we kept cool too.  I don't know if I would do that gravel trail if it was just me and the girls but would probably do it again if Greg was with us.  You should check it out next time you want to explore the park a different way!