The Summer Olympics started last weekend and we are very excited!  We are huge Olympic fans and religiously watch both the summer and winter games.  We have it going on our tv and streaming from our iPads - we are kinda crazy hahaha.  It is the only time I ever miss having a tv on our main floor although being able to stream from our iPads does kinda make up for it.

We kicked it all off by watching the opening ceremonies on Friday.  They were 4 hours long and not all that exciting.  I love watching the athletes come in but even that gets tiresome given how many participate.  Despite my obvious love and loyalty to Canada, my favourite part of the whole spectacle was when the Refugee team walked in.  How amazing is it that after all they have been through, they get to participate in these games.  So inspiring on so many levels.  Finley made flags with the Olympic rings on them and the French and Canadian flags since she loves Paris almost as much as she loves Canada.  Penelope had every flag but Canada on hers but eventually she found space to draw a little maple leaf.  Mexico was her top flag thanks to her love of the beach and spanish language.  Outside of this, I don't remember much of what happened during the 4 hours but Finley went to bad happy as a clam. 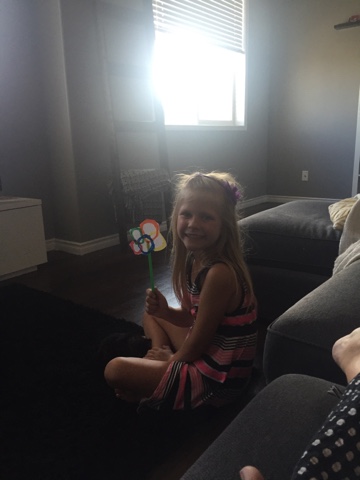 So much Olympic pride for this girl.

On Saturday, it was rainy and gross outside, I wasn't feeling well and Greg had taken my vehicle along with his bike and went and did a hike and bike somewhere in Kananaskis.  He was gone from 5am to 8pm.  He's crazy.  His vehicle his less then reliable these days so after a walk to get Starbucks for breakfast, we headed home to watch some Olympics.  The TV was on most of the day with various sports being shown as we occasionally flicked between CBC and NBC depending on coverage.  We also did some crafting, reading, napping, puzzles and a few games so we weren't watching it religiously.  I don't watch very much tv at all during the day, if any, so this was kind of a big deal haha.

It was so awesome to watch the Canadian Women bring home a bronze medal in the 4x100 Freestyle Relay!!  We were so excited and cheering so hard from home.  I never knew that you could swim the heat with different swimmers and switch them out for faster swimmers in the final.  This, I have learned, is quite common.  I can't remember who skipped the heat but I do know it was Michelle Williams who was dropped from the final.  They interviewed her just after and she was such a great sport about it.  The commentators said that if you swim in the heat and/or the final then you are eligible for a medal but she didn't appear on the podium with the other 4 girls and when all 5 were interviewed by CBC, she still didn't have one.  But when Penny Oleksiak took her medal off and put it on Michelle's neck, it was perhaps the greatest and most Canadian thing that night.  Michelle was so excited and it made us watching at home teary eyed and very excited and proud.  Mark Tewksberry's reaction to them winning a medal was quite amazing too.  If you haven't seen it, you should see if you can find it online.  Fantastic. This is why the olympic games are so great. 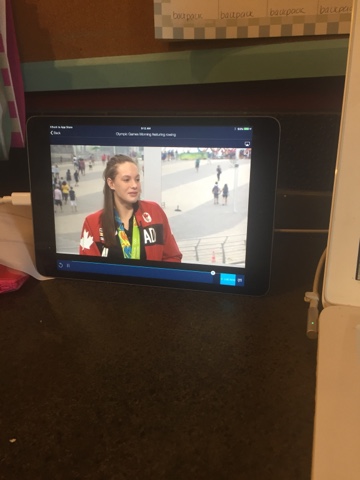 Penny Oleksiak also won a silver medal Sunday night and by the time this posts on Wedneday, she could have another but I think Greg said that she was done for events but I could be wrong.  And so could he haha.  Her real name is Penelope which thrilled Penelope to know this.  Penelope has no plans to change her name to Penny but does have plans to participate in the Olympics as a soccer player.  Finley wants to play volleyball there despite never having played before in her life but her cousin Madi has and she loves her cousin.  She hasn't decided yet between indoor or beach haha.  Both girls spent Saturday watching the Canadian soccer team win their match against Zimbabwe and Finley watched both indoor and beach volleyball yesterday and was very excited by it.  She does have a pink volleyball that Greg has been using to teach her how to serve and other volleyball language that I don't know.

My favourite summer olympic events are swimming, diving, synchronized diving, archery, and trampolining.  I also like watching the marathon and triathlon but I don't watch all of it.  I don't even think they show all of it on tv.  But really, I don't mind watching most events but those are the ones I look for on TV and on the CBC App schedule.  Some are just sooooo boring and I won't watch at all but I don't want to offend those that participate in those sports haha.

One of my favourite things about the Olympics - both summer and winter - is that it really seems to bring our county together. We share in both the excitement and disappointment of our athletes and we rally behind them when they need it most.  We really embrace it and I love it.  We are all proud Canadians and it really shows.  I don't like how it has been keeping me up at night haha.  But now as a parent, I love how the Olympics inspire my kids to dream big.  That maybe if they work hard enough, they can realize their goal.  Now I know that there is a very high possibility that may never make it to this level but who am I to squash their dreams? Especially at this age.  If Finley thinks she is going to be an astronaut and fly to the moon in her pink rocket and play volleyball in the olympics, who am I to say no? I encourage both girls to dream big and work hard and then maybe you will get to where you want to be.  And I think that is part of being an Olympian.

Good luck Canada, we will be cheering you on from home the rest of the games.