Beakerhead was in Calgary from September 15th until September 18th and for the first time ever we decided to check it out.  For those of  you not familiar with Beakerhead, it's a smash up of science, art and engineering which just happen to some of our most favourite things - and by some I mean some more then others.  We mapped out the 8 free exhibits and decided to park in Inglewood and do it by bike since it was too far to walk to them all and parking would be a pain.  It was a beautiful day to start the Beakerhead exploring. 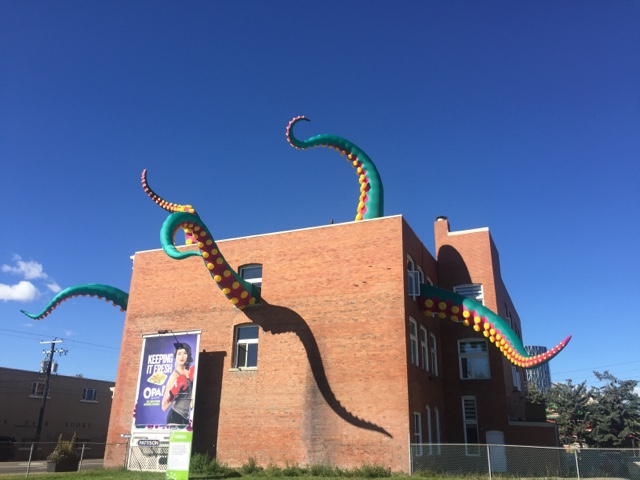 Our first stop was right near where we parked in Inglewood.  I wish they could have eliminated the advertising during the event so we didn't all have Opa ads in our photos.  The field was the best spot for a photo of the tentacles so there was no way to get it all in without the ad.  This was one was called "Tentacles" for obvious reasons.  It was designed by UK artist Filthy Luker and Pedro Estrellas.  Apparently octopuses have massive brains and are one of the smartest sea creatures.  This was according to the sign at this place.  No idea how accurate this is or not. 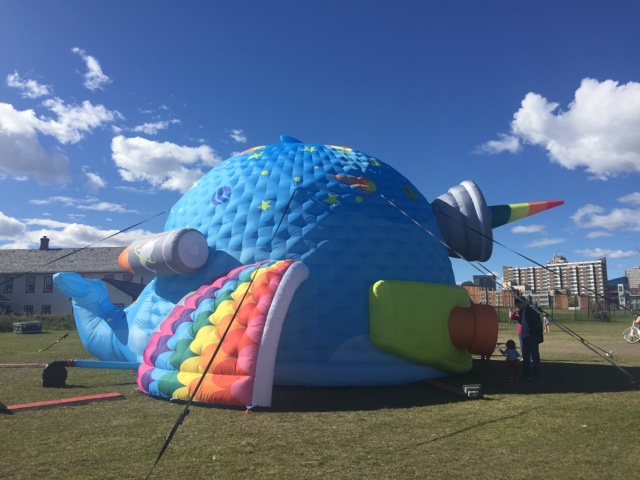 We then hopped on our bikes for a short ride over to Fort Calgary where they had a view items set up.  This one had a crazy long line so we skipped it but basically you took your shoes off and then went and meditated on a lay bad or as I like to call them vagina beds haha.  This was Saturnian and it is a robotic exploratory whale-narwhal designed to explore the universe.  It looked like a neat idea but not great for kids who have no interest in waiting in lines for something they definitely wouldn't do anyways.  I guarantee with kids on there, it would not have been a positive meditative state. 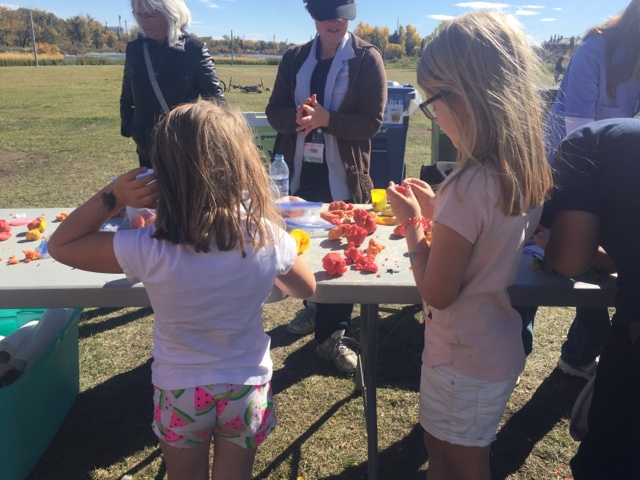 Beside Saturnian, there was a station where you went and made objects out of play doh and placed it on a display.  Finley made her kitty and Penelope made a mountain with snow on it.  This was a really easy way to encourage kids to show their artistic sides.  The girls really enjoyed this. 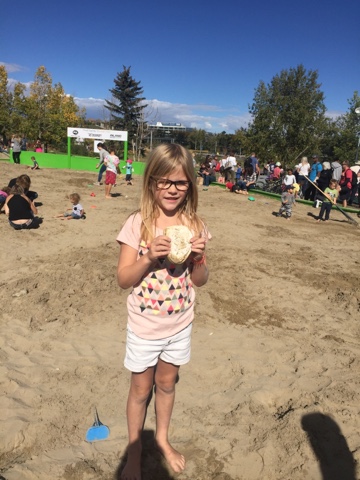 A little further down the green space closer to the East Village then to Fort Calgary, they had a Sandbox For Human Ingenuity.  On Saturday they had a fossil hunt but they missed a fossil because Finley found one on Sunday morning. 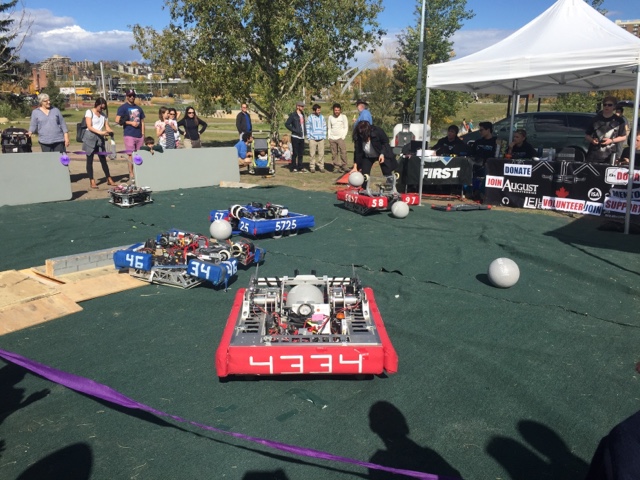 At the same spot as the sandbox, they had robots playing soccer or some kind of ball sport and going over wooden barriers.  It was pretty cool.  They also had popsicles for the kids and one of the Mars Rovers from a long time ago.  It was one of my favourite displays.  This was encouraging to ignite their minds and nurture their passions. 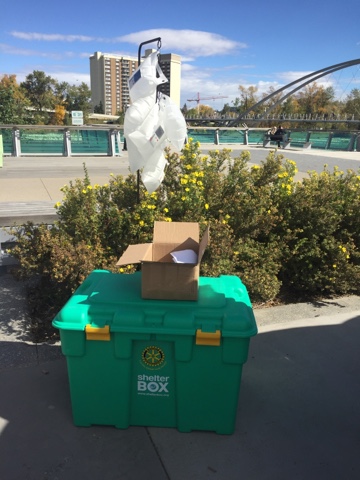 This was the first display we came across once we got into the East Village near the Simmons Building.  They also had a tent set up that you could enter into.  Basically people have shelter boxes in case of natural disasters such as earthquakes or hurricanes and they grab this box and there is a tent and some supplies and whatever else you want to put in it.  I had no idea these things existed, it was pretty cool too. 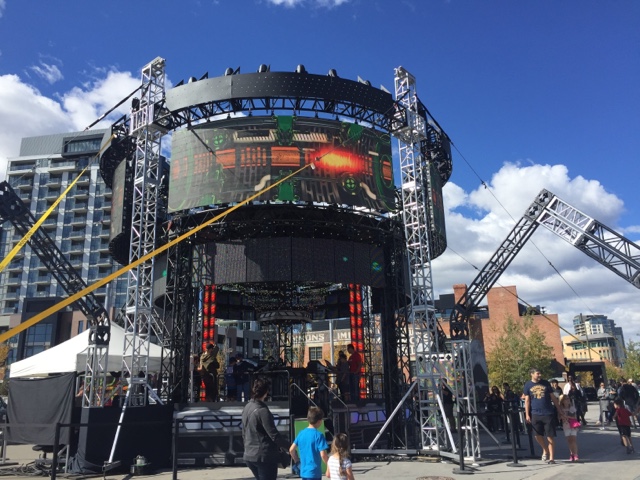 I had met Greg for lunch downtown on Thursday and we ate at CharBar  which is right here and this is what inspired us to come back with the girls on the weekend.  This is the Bass Ship which was built a team of artists and engineers who found a set of mysterious blueprints and went from there.  This is a device used to communicate with ET and all his buddies.  This also had a very long line up on Sunday but essentially you used a computer or something to make the sounds.  It was really neat.  They should have more computers set up to make the line ups shorter and quicker.  Even though we didn't get to make the bass to communicate with ET it was still awesome to see and hear. 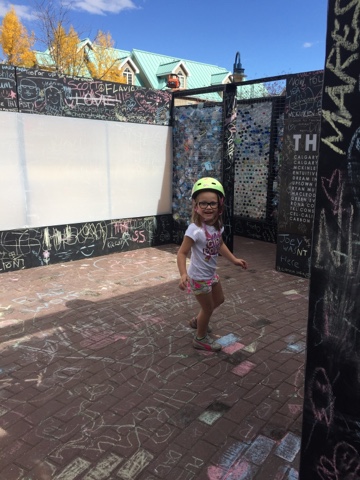 Next we rode from the East Village to Eau Claire where they had a maze that was blocked off by wired fencing filled with plastic bottles.  You had to guess how many you thought were in there and see how close you were to the actual amount.  I won with my pick of 1,000,000 but I was way over.  The actual amount of recycled bottles in the maze were 26, 484.  It seemed like it should have been way higher then that.  Apparently they had security guards here making sure none of the bottles got stolen from the display haha.  Make sure you make an effort to recycle your plastics, aluminums and glass and not sent them to the landfill.  Plastic takes 400 years to break down in a landfill, Aluminum takes 500  years to break down and glass takes 1,000,000 years to breakdown.  Incredible!! The new benches at the Calgary Zoo are made out of recycled milk jugs and it takes about 1000 of them to complete it.  I thought that was really interesting. 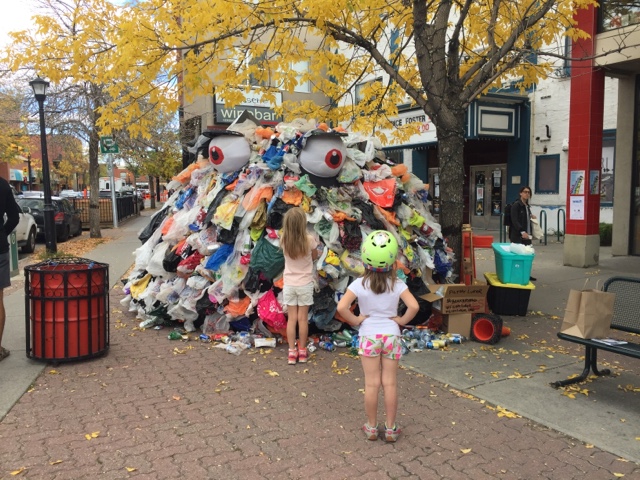 Next we hoped on our bikes and left eau claire behind for Kensington.  Greg and I used to live there and I miss it so much.  This display was called the Rubbish Monster and was done by the same artists as the Tentacles in Inglewood.  This interactive artwork is designed to encourage collaboration between the people sitting on the beach.  It moves up and down and was really cool. 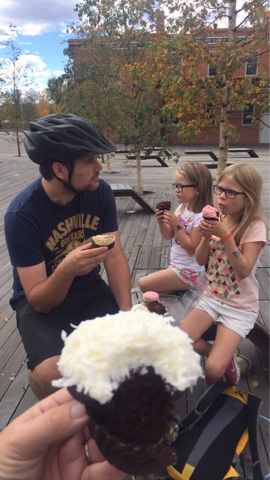 Our next stop was the original Crave Cupcakes store.  The bite taken out was the only bite I had.  I found it way too sweet and it gave me an instant stomach ache.  Mini cupcakes for me only. 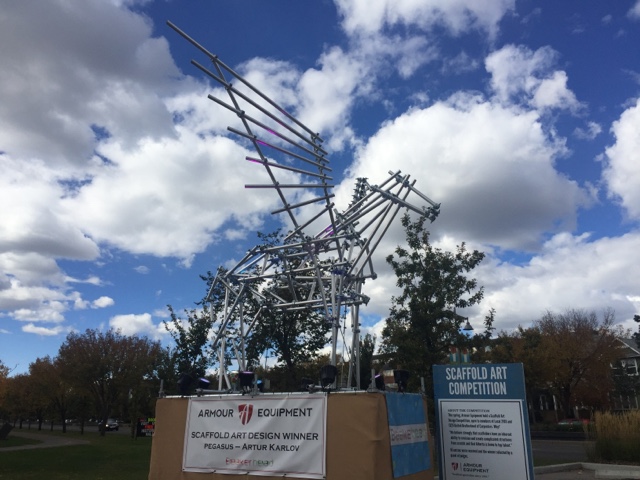 This display was just past the 10th street bridge and I think it would have been much cooler seen at Beakernight.  It just didn't look all that exciting in daylight.  Armour Equipment held a scaffold art design competition because they believed that scaffolders have an inherent ability to envision and create complicated structures from scratch and that Alberta is home to top talent.  10 entries were received and the winner was Artur Karlov who lives in Edmonton.  He designed Pegasus, a diving winged stallion from Greek mythology because it represents the essence of what the scaffold is: something sturdy and reliable and just like a pegasus would not be ridden just by anybody, no scaffolding requires someone who possess appropriate level of scale. 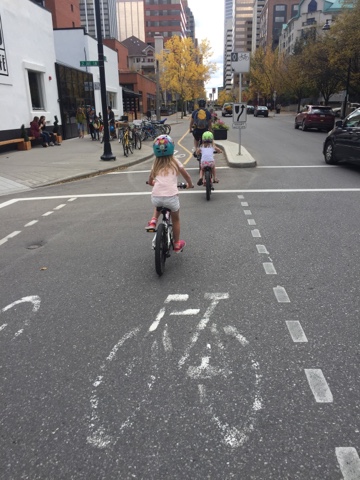 Once we finished the scaffolding, we took the bike lanes back to Central Memorial Park.  It was our first time riding on them downtown and it was pretty cool.  Finley said it was one of the most amazing things ever and we all agree.  Calgary needs more of these and they need more bike only lanes in the parks to make it safer to get through the areas.  The light signals for the bike lines are green bikes and red lights.  So awesome! 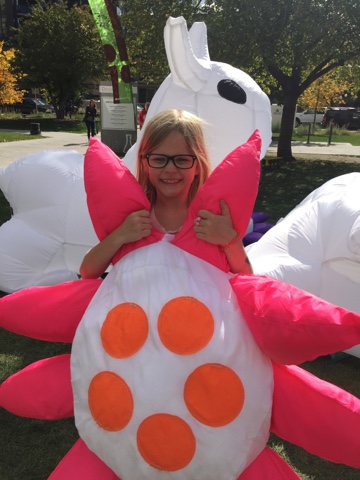 We decided to skip the 2 displays along 17th and make this our last stop.  It was getting windy and cold and I wasn't even supposed to be riding my bike yet with my ankle injury and i was starting to feel some pain.  This was called Nibbles and consisted of inflatable rabbits that stayed in place and then flowers and carrots you could carry (although most kids were dragging) from bunny to bunny.  This was done by an Australian artist by the name of Amanda Parer.  She explores the natural world, it fragility and our role within it.

I am so glad we decided to finally check out Beakerhead and disappointed at the same time that it took us so long to do it.   Our kids loved it so much and we really enjoyed it too.  It was also a great opportunity to explore the city by bike and see things you don't get to see to often living down in suburbia.  Next year, I want to take the girls to Beakerhead during the day and then ditch them to go back and see Beakerhead at night, I think that would be really awesome too.
at September 28, 2016
Email ThisBlogThis!Share to TwitterShare to FacebookShare to Pinterest
Labels: Beakerhead, Bike With Kids, BikeYYC, Calgary, Calgary By Bike, East Village, Eau Claire, Kensington, YYC