On Sunday, We decided to head to Banff and hike up to Helen Lake. I found this in Greg's hiking book and thought that it would be easy, mostly because this book told me it was.

Here are some facts about this hike found in Greg's book "Don't Waste Your Time In the Canadian Rockies":

How To Get There:  From the junction of the TransCanada (HWY 1) and the Icefields Parkway (HWY 93), drive the Parkway northwest 33.2km to the Crowfoot Glacier viewpoint.  Or, from the Bow Summit, drive the Parkway southeast 7.7km.  From either approach, turn into the trailhead parking lot on the north side of the Parkway. 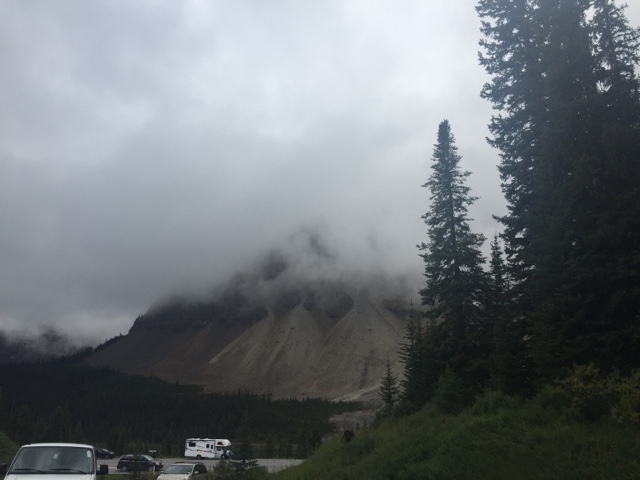 It was pretty dreary when we got to our destination.  The clouds were low, it was chilly but the forecast wasn't calling for any rain until later in the afternoon so we were going to be ok.  Or so we thought.  We had all brought layers of clothing on top of what we were wearing: down jackets, rain jackets, mitts, toques, and long sleeved running like tops and bottoms.  We were covered for literally everything mother nature could possibly throw at us.  And when it is September in the mountains near Columbia Icefields, you can never be too prepared.  Really this could be accurate anytime you are in this area haha.  This was a hike that nobody in our family has ever done so that was pretty cool.  Greg does a lot of hiking with his brother and friends and so he ends up doing some hikes multiple times. 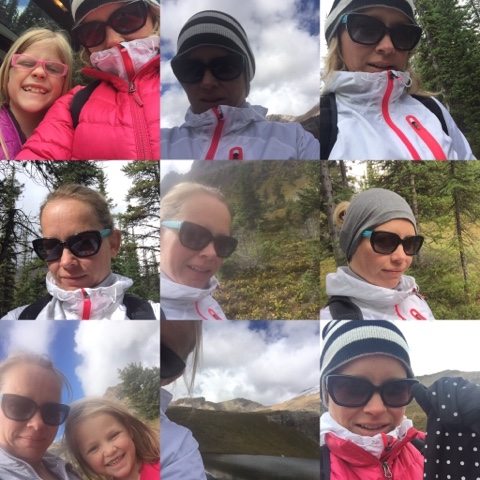 I did selfies of all my different looks during the hike.  Sometimes the switch to more or less happened within minutes of each other.  It was so warm when the sun cracked through but so cold when it decided to go away.  I am sure that this breaks a record for most photos of me ever in one blog post.  Or most photos of me in a year hahaha.  As you know, rarely are there any photos of me in any of my posts haha.  I spent a lot of time in my Under Armour Rain/Wind Jacket.  It was really perfect for this kind of hiking weather. 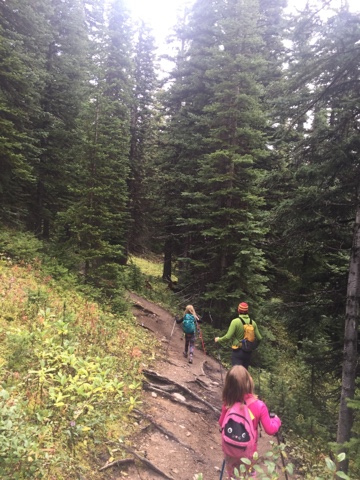 For quite a while we hiked through tall trees and tree roots.  They were everywhere and some areas were way worse then others.  The ground was wet and very muddy in some spots but overall it wasn't too bad.  On the way up that is - on the way down? Now that's a whole other story that you will read about later on.  We stopped a few times to both remove and add layers and of course, for candy breaks.  I think the sole reason Penelope endures hiking and back packing is her love for all things candy.  We had gone to superstore the day before and picked out our favourites: jujubes for Greg, blue whales for Finley and Penelope and I both picked these raspberry things that I thought would be like swedish berries but they were not.  This meant even more candy for Penelope.  It was a very busy hike and we encountered many hikers of different experiences, levels and ages but none were as young as Finley and Penelope.  In fact, there were no kids at all. 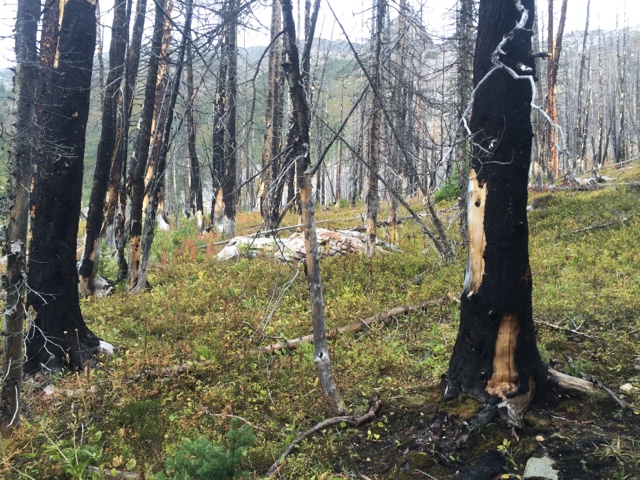 One of my favourite things on the hike was hiking through the remnants of a long ago forest fire.  I had never been that close to anything like this inside of Banff National Park.  It's rare that they endure the types of fires that other areas go through because they actively have prescribed forest fires throughout the park.  We went to Yellowstone National Park in the United States and they have been hit with several large fires over the years and it was at times very spooky on some hikes. 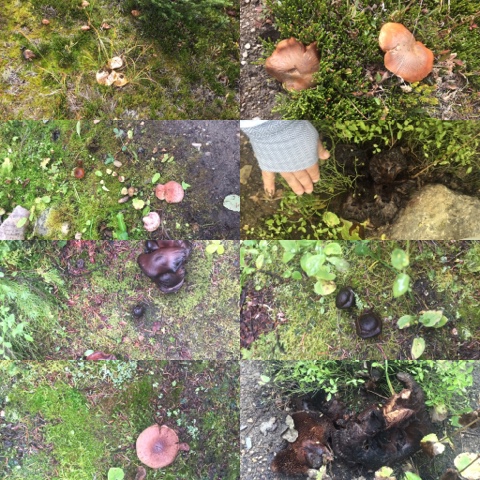 I have always been fascinated by the mushrooms you see when hiking in national parks but I think this has the most variety and crazy looking mushrooms.  We saw a lot of similar species in Lake O'Hara several years ago but that was a few years ago and neither girls remember that trip very well.  So many colours, shapes and sizes. 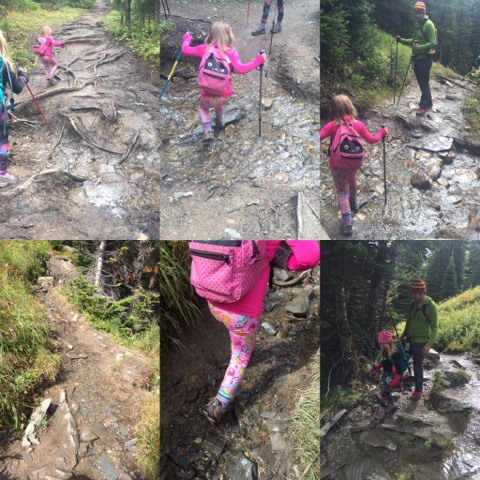 A lot of the trail involved crossing over creeks and water falls.  Some were easier then others and others were the kind where you closed your eyes and kinda hoped for the best.   A few times we had to climb up the creek to get to the next part of the creek.  The water wasn't too deep and we all managed to make it up the creek and back down without getting too wet.  Muddy yes, but wet no. 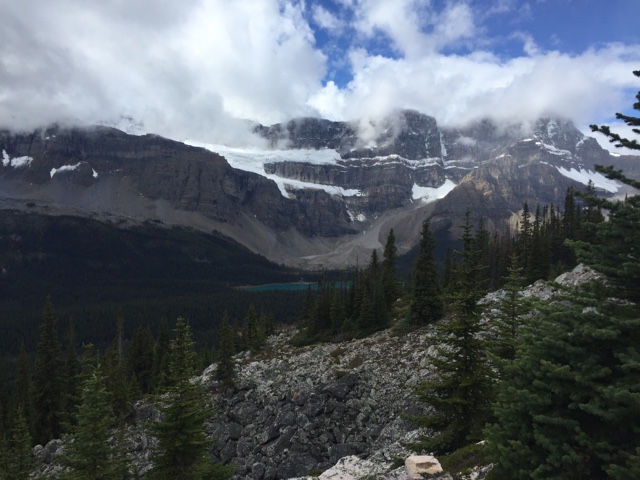 Here you can see Bow Lake and I think Crowfoot Glacier.  But if not Crowfoot, then it is Bow Glacier.  Bow Glacier is where we get our water from here in Calgary.  You can hike around Bow Lake to get to Bow Glacier and Bow Falls.  We have done that hike a few times and if the sun is shining, the backdrop is stunning.  We canoed once across Bow Lake and it was a disaster.  It got crazy windy and it was a serious struggle to get back to shore in one piece.  I haven't been back in a canoe since.  That was 2 summers ago now.  Even with the low cloud, it is still a beautiful view. I love the peak of the mountain water brightening up the otherwise dull day.  Penelope said several times that she wished this was where her bedroom was so she could wake up to views like this. Greg and I have always worried that because the girls have grown up with this in their backyards that views like this would become second nature to them and not appreciate it the way they should but it turns out I don't think we have to worry about that. 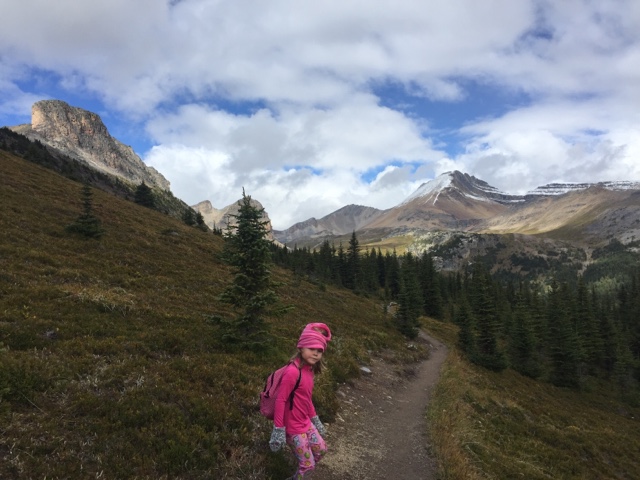 After some steep hills climbed, we entered into the alpine meadow portion of the hike.  This is Greg's favourite part of hikes like this.  He loves the meadows.  I like it but not as much as he did.  Penelope has turned herself into quite the hiker and the two of us out hiked Greg and Finley for most of the hike.  On several occasions, Penelope stopped and did jumping jacks, mountain climbers, pushups and planks.  She loves so much to exercise and stretch and just be active.  She even used her hiking polls to roll out her it band and calves on a few occasions.  She makes me laugh. 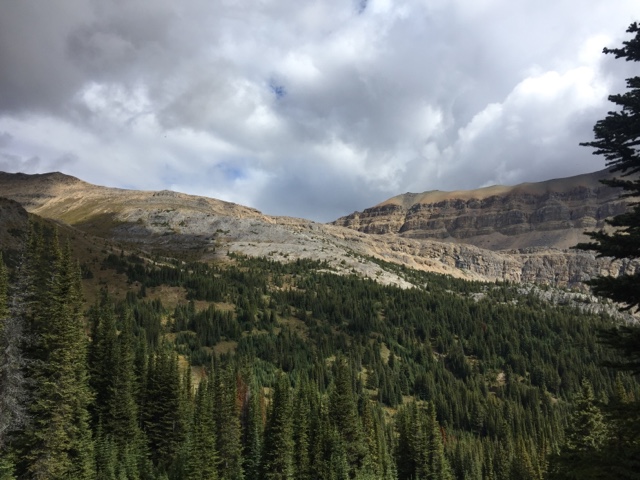 Even the dreariness that followed us for most of the day still couldn't make this look ugly.  Such a beautiful piece of nature right in our backyards. 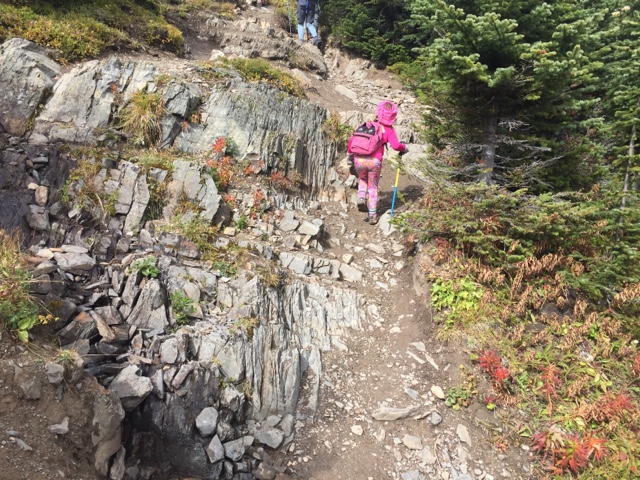 More steep climbing.  I was so tired at this point.  My calves and knee hurt so badly.  I so wanted to turn around and go back to the car but I knew that was not an option. 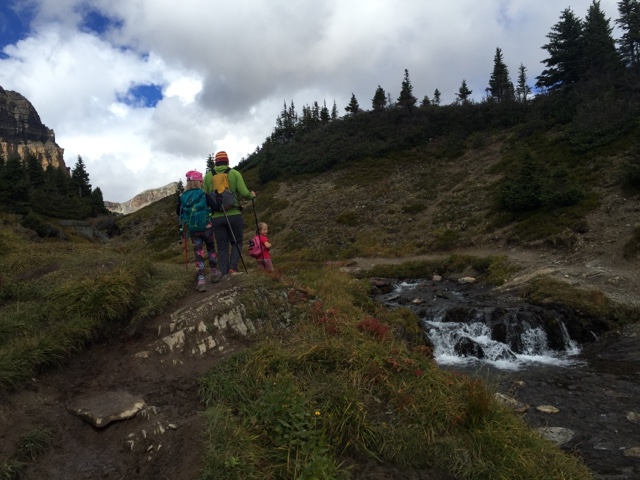 Several times I kept asking if were getting close to Helen Lake.  It seriously felt like the hike that went on and on and never wanted to end.  We walked and walked and then walked some more as we tried to find our destination point.  It would be where we would stop to have lunch too as we were all quite hungry. 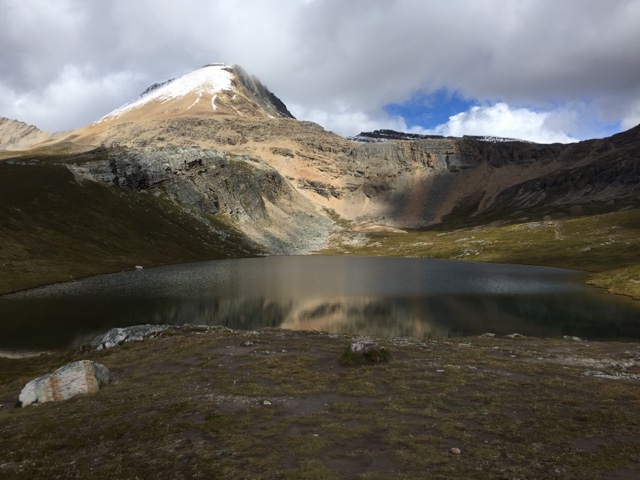 Finally we made to Helen Lake and it was almost like a disappointment.  All that hard work climbing hills and creeks and the sunshine and the rain and this was it?  Greg was also disappointed.  It's not that it wasn't a beautiful lake, because it was.  But after the beautiful alpine and mountains that we had walked through, it was just kinda anti climatic.  At least we got some great views on the way there! Lunch consisted of ham wraps and more gummy candy.  We suck at hiking lunches to say the least.  We have been hiking in Banff for almost 12 or 13 years and we still don't do it right hahaha.  Shortly before we got to the lake, we all took off multiple layers because it was so warm but we had to put them all back on and then some.  Every layer of clothing that we brought was quickly put back on.  The wind picked up and the temperature dropped.  We quickly packed our stuff back home and began what we hoped would be a quick hike back down to the car without getting caught in any storms or anything like that. 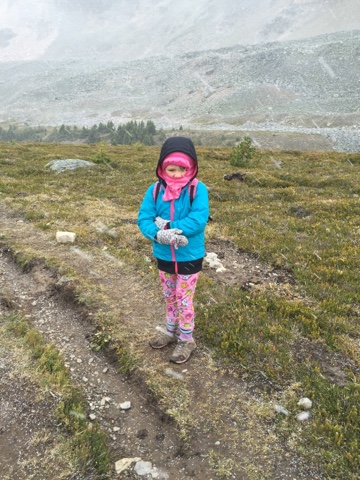 Within minutes of us leaving Helen Lake after lunch, this started.  That my friends is snow.  It was more pellet like then snow like and it reminded me very much of what I ran through at the Harvest Half last October.  The pellets kinda hurt when they hit the face.  We tried to walk as fast as we could because we figured once we got back to a lower elevation, it would turn to rain or just stop altogether.  Penelope and I once again left Greg behind and hurried back down.  The two of us decided that we would not stop until we got to the car or the snow stopped. 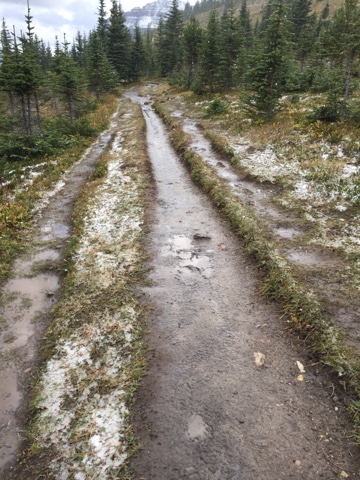 Some of the accumulation.  I am not too sure how long it snowed for but it felt like a long time.  I would guess about 3 or 4km??  I don't really know.  It made everything muddy and gross and harder to bypass stuff because it was all wet and gross. I was climbing over rocks to avoid stepping in mud because i hate mud and i hate mud on my shoes even if hiking shoes are designed to get muddy.  I was pretty good until we got close to the bottom and my foot slipped off the rock and I fell into mud. Thankfully I didn't end up too badly with only mud on the backs of my legs below my knees and a bit on my jacket.  However, when I fell I awkwardly twisted my knee and ankle.  My ankle seems fine but my knee is still bothering my Tuesday night as I write this.  I am not too sure if it's because of my calves are too tight from the steep hills I hiked up or because of my fall.  I am going to give it a few days before I go back to Shari to get looked at. 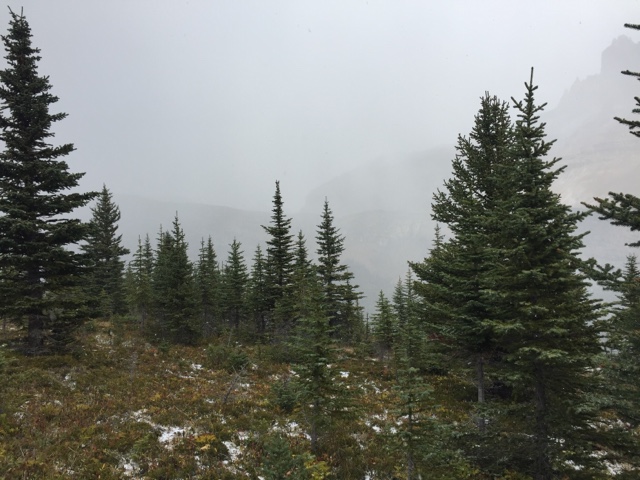 It's a good thing we had some good views on our way up because we virtually had nothing on our way back down.  The good part was that the closer we got to the bottom, the warmer it got.  We were all happy about this. 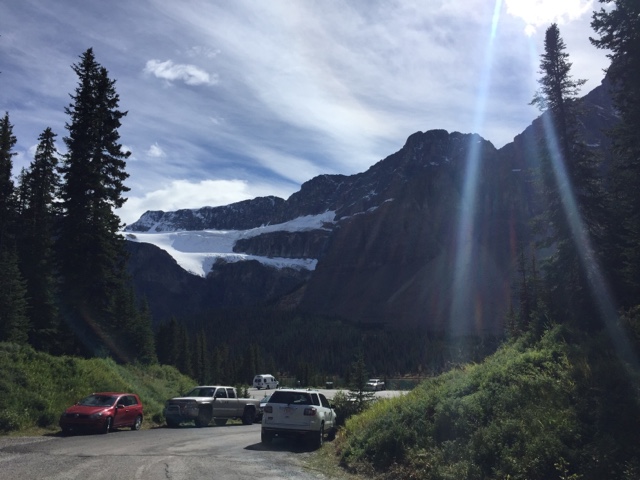 This is the same photo that I took that you saw at the beginning of the post. It's amazing what a few hours and weather changes can do.  So much prettier like this.

So was this hike easy?? No, not really which is probably why you didn't see a lot (any) kids on it.  Greg said the book that he uses to plan his hikes and trips and stuff is meant more for advanced hikers then say family hikes but we all survived.  I would like to go to the Ridge or even Cirque Peak but Sunday was not that day.  We rewarded our hard work with a trip to the candy store in Banff.  It was well worth it.
at September 07, 2016
Email ThisBlogThis!Share to TwitterShare to FacebookShare to Pinterest
Labels: Banff National Park, Explore AB, Helen Lake, Hike AB, Hike With Kids, Outdoors