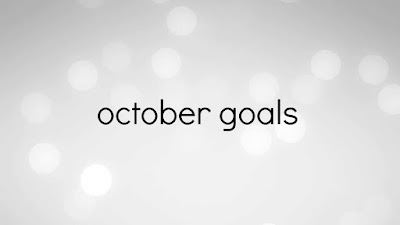 So this is a new first for me setting monthly goals and I hope it is one that continues going forward.  My goal for this is to have a short but attainable list of things I would like to successfully do for the month and then review at the end of the month  - what worked, what didn't, why I was successful or not successful - stuff like that.

I did my 37 by 37 goals last December and I turned 37 earlier this month and while I accomplished a lot, I didn't accomplish them all.  And it wasn't because I wasn't trying, it's just that I mostly forgot about them over the course of the year.  And let's just be real here, September was a gross month that pretty much went down hill after my birthday for a vast variety of reasons.  So I am hoping this will get me back on track and set me forward on a new path of health, happiness and wellness.

Do you have any goals for October??