So I decided to get rid of my gallery wall that I had in the dining room area of my kitchen.  Penelope knocked something off of it and it disrupted a bunch of the items on the wall.  I tried to put them back on and caused a bigger disaster and decided it all had to go.  Then I realized I needed something really big to go on that wall mostly to cover up all the nail holes from the gallery wall.  I knew I would never be able to convince Greg to paint the main floor so I needed something big. I was perusing on pinterest and decided to make a chalkboard out of things I already had. 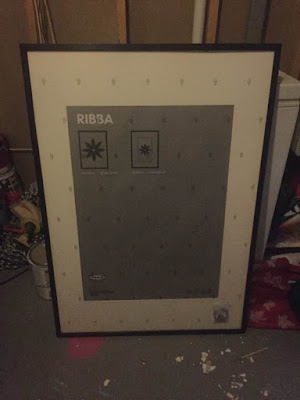 I found this frame on one of the Facebook buy n sell sites for $1.50.  It is gigantic and was wayyyyyy bigger then I thought it was when I committed to buying it a few months back.  I could never figure out what to do with it so it has basically sat in my basement collecting dust until now.  I texted my friend Heather who makes amazing things and knew she would be the best person to ask for help with this.  I told her I wanted to use the plastic part that protected the frame as my chalkboard. 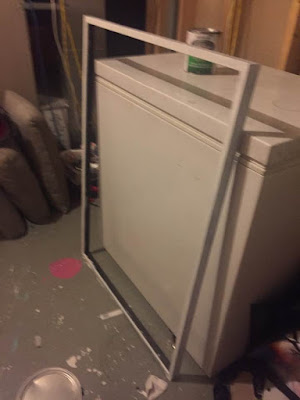 First I painted the frame white. I didn't have any craft paint so used paint I would use on the wall.  This was the first coat.  I decided to paint this project in our storage room. 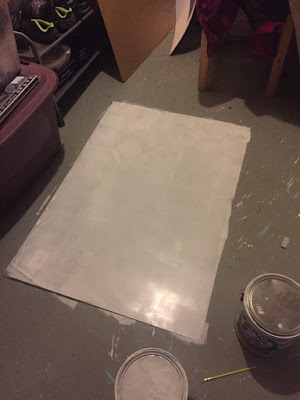 Heather was worried that using the plastic would cause my chalkboard to chip so she suggesting priming it.  I gave it two coats of primer that I already had in my collection of paints. 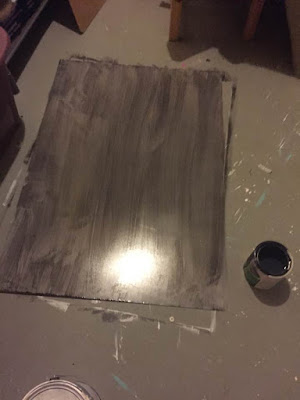 After two coats of primer, I started using the chalkboard paint that I also already had thanks to our chalkboard wall in our basement.  If you are interested in it, you can buy it at Home Depot for I think $26 but I cannot remember.  I used 4 coats of chalkboard paint on this piece of plastic. 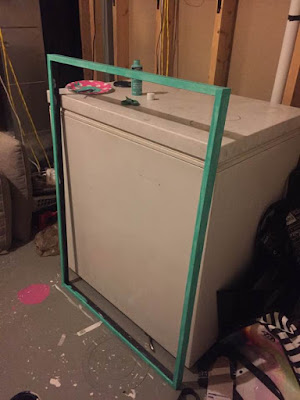 I decided I hated how the white paint was covering so I used the turquoise craft paint I already had in the basement to paint it and it worked out much better.  I still want it to be white but it was a late at night decision and I didn't want to go to Michaels to get any and at the same time I didn't want to wait to do it because I wanted it done by Thanksgiving weekend so turquoise it was.  The other option was pink which I didn't think would work well with the red walls haha. 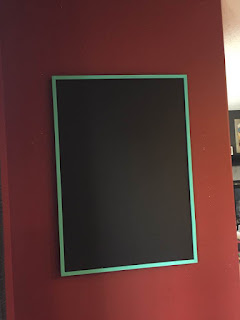 And here is my complete diy chalkboard for our former gallery wall.  We all wrote what we were thankful for on it and it was perfect for Thanksgiving weekend.  I was worried that the chalk would stay on after I washed it off or the paint would chip but pinterest told me to use windex and a sponge to clean it and it worked like a charm!!

It's not often my pinterest diy projects come to life in a way that I am so excited to blog about but this was one of those rare moments.  And best part of all, it was all done using supplies I already had in my house!!
at October 11, 2016
Email ThisBlogThis!Share to TwitterShare to FacebookShare to Pinterest
Labels: DIY, Pinterest