This past Saturday we hosted Finley and 10 of her friends at Lloyd's Roller Rink and it did not get off to a good start.  I had initially booked her birthday party for that day at 5pm but a few days later I called back to change it to an earlier start time and they said that was fine.  Unfortunately for all of us, that change was not actually put on the slip and so when we got there at 1130, they still had us booked for 5pm.  The girl let us in and gave me a big smile and finley a free entry coupon for next time and said we could use the rink but they basically had no room for us.  I was not thrilled with that to say the least but somehow it all worked out.  I don't think I would ever book another birthday party with Lloyds because despite everything working out it still left me with a bad taste in my mouth.  Plus that place is super chaotic and extremely stressful on the parents hahahaha. 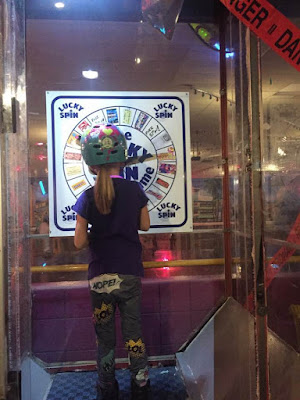 Shortly after we got there, Finley got called to the spin box which reminded me of the Ryly's birthday money machine they used to have way back in the day.  She spun and won a free package of tic tacos but I forgot to give it to the concession stand so she actually won nothing. 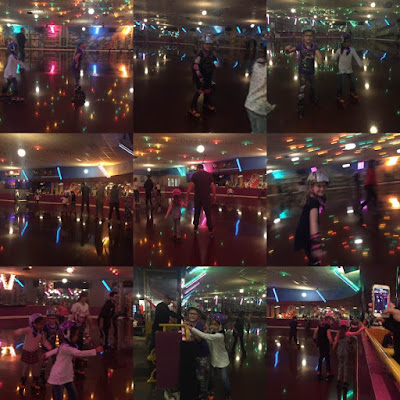 Greg went on the rink with the kids while I corralled the kids who came in late or who were taking a rest.  Roller skating is exhausting!  All were a little nervous when they started but by the end of the afternoon, they were all cruising around the rink. 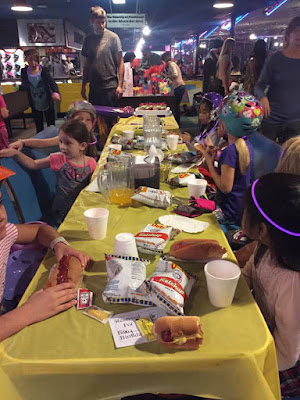 The birthday package includes skate rentals, skating, hot dogs, potato chips and unlimited pop.  I don't think anybody actually ate their potato chips at all.  The birthday party package is $16 per child which isn't too bad of a price for 3 hours of skiing and some food.  The concession stand there is cash only which I find strange considering the line ups are never that long and they have a debit/credit machine anyway that you can use if you book a birthday party or some other special occasion. 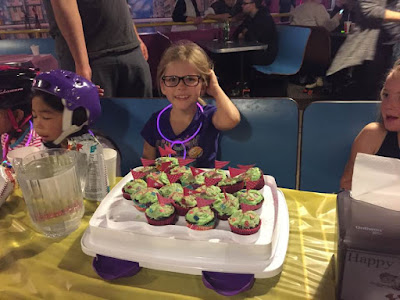 Normally Finley picks a theme for the party and we do everything to coordinate with it.  This year we didn't.  She had Star Wars invitations, a roller skating party, Halloween loot bags and she wanted lime green cupcakes with pink sprinkles so that is what she got.  I forgot both a candle and matches so she pretended to blow out the candles. 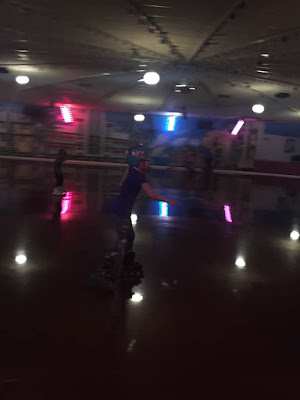 Finley had so much fun at her birthday party and loved skating a lot.  She had been here for a birthday party back in May and has been wanting her party there ever since.  Despite a rocky start to the party given they didn't make the reservation change, everything worked out perfectly and Finley couldn't have asked for a better way to celebrate turning 8 with her 10 closest friends.  We plan on celebrating her real birthday all day with her on Saturday!
at October 25, 2016
Email ThisBlogThis!Share to TwitterShare to FacebookShare to Pinterest
Labels: Birthday, Calgary, Finley, Lloyds Roller Rink, YYC