For the entire month of September I have started running Five On Friday's but none got published because I never finished them.  So here are a bunch that are still around so you can have a gander and read them.

1.  Last year when Finley was in Grade 1, her lunch almost always consisted with either a sandwich or crackers along with fruit, veggies, yogurt and the occasional treat.  Once in awhile she would take leftovers.  Finley has not ate a sandwich since school ended in June. She doesn't much like them to begin with and almost hates them now.  So I was quite happy with myself that I avoided making sandwiches at all for their lunches up until last week.  I sent wraps in their lunch with ham, peppers and ranch dressing on them.  I knew Finley would love them but with Penelope you just never know what she likes and doesn't like on a day to day basis.  I had picked them from school last Monday after I sent wraps since we were going to get new glasses.  Finley told me that she loved the wrap and Penelope told me to never send her one again.  And then she said to me "Mom, why can't I ever just have a sandwich?"  I can't win hahah!!  Finley has yet to have a sandwich as of the writing of this post and Penelope has had sandwiches 2x.
Here is a sample of yesterday's lunch: 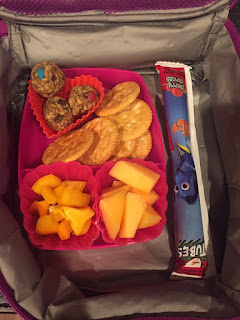 I don't do any of those fancy lunches you see floating around pinterest or Facebook.  My Aunty gave me the red heart silicone muffin cups which don't work for muffins but somehow saved them over the years and they come in handy for lunches.  I also just bought the pink circle ones holding peppers and fruit from IKEA last week for $3.  The container itself was a special from Tupperware last month.

2.  I had been wanting a down jacket from Lululemon for the last few years but was far too cheap to fork out the $200 they wanted for them (and even more now since they jacked all their prices up August 1st) and then when they went to WMTM I was worried about buying them online without trying them on since Lululemon and I have a love hate relationship when it comes to their jackets and my shoulders.  Actually I have this problem with The North Face, Columbia and MEC so maybe it's just my shoulders that are the problem??  Anyways, I happen to find someone selling their Size 6 on our Facebook auction buy n sell site and scored it for $41.  I had been hoping for black but for $40, I was fine with most colours.  This one is actually quite pretty and was worried that it wouldn't fit in the shoulders but it fits there pretty well.  It's more fitted in the back where it feels a bit tight which is something that i have never experienced and titch tight in the chest.  I have worn it twice to school drop off's since it can be quite cold early morning I have discovered and I don't feel uncomfortable wearing it.  I am still wavering on whether or not I will keep or sell it but for now, it is mine. 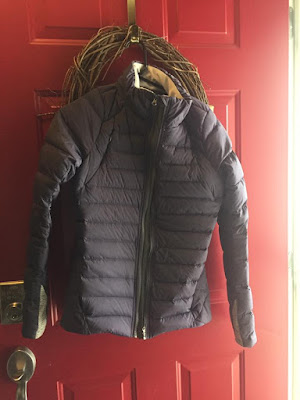 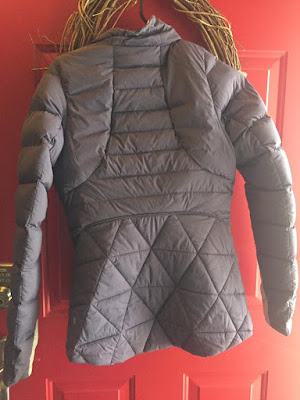 3.  Our dishwasher is not working again much to my dismay.  It worked perfectly for like a day and then soon every time you use it you would have to drain it before you could run it again.  The first time it was one drain and emptied and by earlier this week I was having to drain it 8 or 9 times before it was emptied.  So i have given up and gone back to washing dishes by hand which I really hate doing.  I hate the cluttered look of dishes in my sink drying (and yes I could solve this by hand drying but I have to do that camping and I hate that more then washing dishes) and really I am not a good dish washer by any definition.  Greg thinks it is the pump that is going and it needs to be replaced so hopefully he does that to see if that is the problem otherwise I want a new dishwasher haha.  We are hosting Thanksgiving on Sunday so I went and bought Thanksgiving paper plates from the dollar store hahaha.

4.  I have been wearing my hair down all week unless I am running or at bootcamp.  I haven't straightened it at all but still down none the less.  I did wear it up on Monday I guess but every other day it has been down.  It feels weird having my hair  down but I decided that if I want to keep my hair long then it needs to be more then just a messy bun every single day.  So we will see how long it lasts but I am sure this is a new record for me being down for the 4th straight day hahaha. 5.  I lost my Gilmore Girls virginity yesterday.  I watched the first episode followed by 3 more.  I love watching TV on my iPad since I can carry it with me as I clean around my house.  It makes cleaning bathrooms that much less painful.  I actually like the Gilmore Girls so far and I am not entirely sure why I never watched it while it was on TV the first time.  I had no idea that Melissa McCarthy was on it though, I like her character a lot.  She seems to be clumsy like me hahaha. 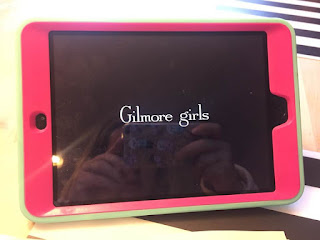 at October 07, 2016
Email ThisBlogThis!Share to TwitterShare to FacebookShare to Pinterest
Labels: Five on Friday, Lululemon, Netflix