Finley and Penelope are both playing indoor developmental soccer this year and both had their first practices last night at the same time in different locations and Greg was out of town.  Of course this had to happen hahaha.  Penelope's was 6 - 7pm at Cardel Place South and Finley's was 6-730pm at Cedarbrae Community Centre which is about 15 minutes away.  It made sense to take Penelope first since her practice was shorter and closer to home so that's what we did. 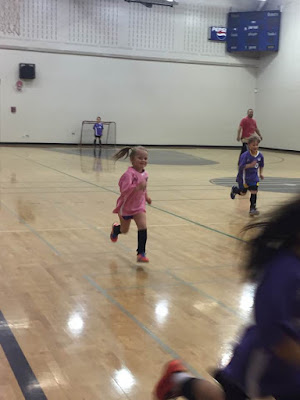 Both U8 girls teams with SWU practice together on Wednesday evenings.  I only saw the last bit of it so I have no idea if they do skills for the first half and games against the other team the second half.  I guess I will find out next week for sure.  The head coach is in Europe so the assistant coach took over and he seemed to be really good.  He looks like he is a high school or university player who is coaching on the side.  SWU utilizes a lot of their older players for the assistant coach positions which I think is a brilliant idea.  Penelope scored one goal when I was gone to take Finley to her practice but she said she easily could have had 3.  She does not lack any confidence when it comes to soccer haha. 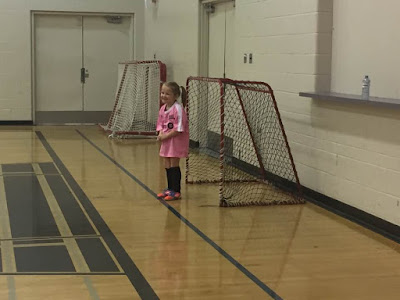 I saw her play goal the longest and for the most part she was bored as there was not a lot of action at her end but she made a few good saves.  She has no fear which is generally good for a soccer goaltender.  She finished at 7pm and we quickly ran to the car and drove to Cedarbrae to watch the end of Finley's practice.  Her first game is on Sunday and she is very excited. 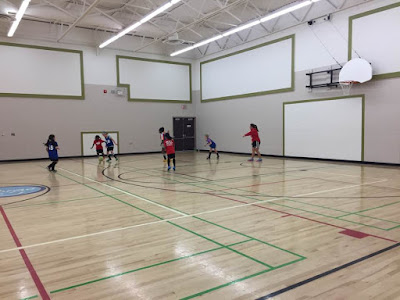 This was Finley's first year of soccer evaluations.  They do try outs for both U9 and U10 girls and they have 8 teams I think depending on enrolment.  2 U9 Academy Teams and 2 basic and then 2 U10 Academy and 2 basic teams.  I think they rebranded the academy division to SWU Premier because Finley made the Academy U9 B team and her team is called the SWU Premier 08.  Basically the difference between Academy/Premier and Basic is the additional Academy training.  When you make the Academy team you pay an additional $250 for 30 Academy training sessions and your soccer participation goes from 2 - 3x per week with Basic to up to 6x per week with Academy.  Academy Training has not yet started for Finley's team. 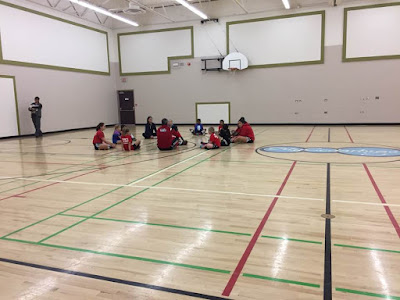 I didn't get to see much of Finley's practice but I did see her play goal for a few minutes and then on defence .  She did fairly good and made some solid defensive moves to end the practice.  She gets easily distracted though when she sees me or Penelope or Greg on the sidelines which isn't too great.  They finished off their practice with a solid stretch session which makes me happy to see.  I am a bit of as stretching extremist and make the girls stretch all the time after soccer so at least now they know I am not totally crazy. 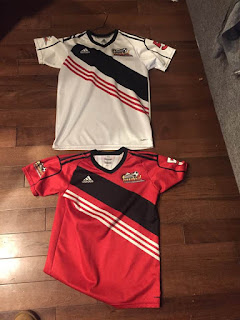 Finley also gets 2 jerseys this year which we have to give back at the end of the season otherwise we get charged $100.  Penelope picked out the jersey number for Finley because she wanted them to be the same number.  Finley's first game is on Sunday as well and she is more nervous then excited.

Hopefully Greg doesn't have to go to site too many times so we (mostly me) don't have to go through all the stress of getting 2 kids to soccer at the same time at different locations.  I spent more time in the car then I did outside the car from 530-745 but it was worth it in the end.  Both girls are so happy to be back playing soccer regularly again.
at October 27, 2016
Email ThisBlogThis!Share to TwitterShare to FacebookShare to Pinterest
Labels: Calgary, Cardel Place South, Cedarbrae Community Centre, Finley, Penelope, Soccer, SWU Soccer, YYC