She Finally Lost It!

She has been waiting very impatiently to lose that first tooth.  Unofficially, it started right after Finley lost hers but officially, the day after her 5th birthday.  Finley lost her first tooth 3 weeks after she turned 5 and Penelope expected the same to happen to her.  But it didn't.  Penelope watched as her 2 of her best friends lost their first teeth over spring break.  And then she watched her 6th birthday pass and go without so much as a real wiggle.  I say real because I lost count at how many times she said she a loose one.  Then school started and it seemed like everybody had lost that first tooth but her and she hated that she still hadn't lost hers.  However a few weeks ago I returned home from  a weekend in BC and she announced she officially had a loose tooth.  For real this time.  She quit eating apples and anything hard because it bothered her.  She didn't spend much time wiggling it and instead babied it despite us telling her that it isn't gonna come out unless you wiggle it.  Finally, she decided that she was gonna wiggle it until it came out and it finally did on Monday evening. 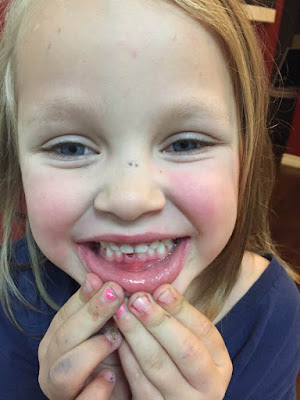 I came home from Bootcamp to find this toothless smile waiting for me in the mud room to show me that her tooth finally came out.  She spent the entire time I was gone wiggling it so it would come out.  She already has an adult tooth growing in behind it.  I think she was a little disappointed it happened at home and not at school because when it happens there you get a tooth shaped necklace where you can put your tooth in. 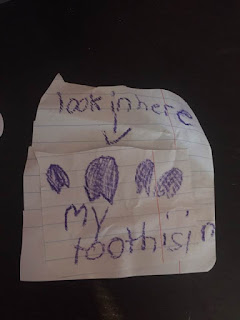 Both girls have pillows with little tooth pockets on it to store your teeth for the tooth fairy but neither was to be found so Finley made this for Penelope to stick her tooth in.  Penelope loved it and put it under her pillow for the tooth fairy to find it.  I was kinda worried  how I would get the tooth out and put the money under her pillow since she has a loft bed.  I convinced her to keep her lamp off because I said the tooth fairy only knows you are asleep if the light is off and we kept her bedroom door open so that it would be easy for the tooth fairy to get in.  It took her awhile to fall asleep which meant I had to stay up even later to make sure she was fully asleep so I could make the switch.  Finally I was able to do it thanks to standing on her desk chair hahahaha. 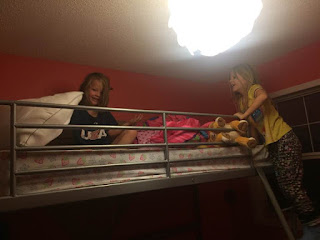 Penelope was so excited to go to school yesterday morning and show off  her new toothless smile and is anxiously awaiting more teeth to become loose.
at October 19, 2016
Email ThisBlogThis!Share to TwitterShare to FacebookShare to Pinterest
Labels: Penelope, Tooth Fairy