As is the norm when we go back to Saskatoon, we had several Christmas gatherings.  However, what was different about 2 of them this year was the change of location.  One change for new beginnings and one change as a striking reminder of who was no longer with us.

Christmas morning and day and dinner has always been at my Aunty Sandy and Uncle Lloyd's house whether it was when they lived in Prince Albert or Saskatoon.  If you were there, that is where we went.  This year, it was held at her son's house along with his wife and 2 sons.  It was a good time but it just didn't feel like Christmas.  My Uncle Lloyd was there as were my mom and sister and my Aunty Patsy so it was nice to be with family who were feeling the same emotions you were.  There was no gathering at Aunty Sandy's and she wasn't making her great feast as Finley called it.  It was strange and weird and I am not sure how I feel about it.   It was the end of one long held tradition and the beginnings of another.  I am sure one day when we spend Christmas in Saskatoon it will feel like the norm, but I am not sure when that will happen.  I am sure the same thing happened when Grandma and Grandpa died but I don't really remember anymore.

We celebrated Christmas with Greg's mom by paying one final visit to Greg's child hood home to say good bye.  Greg's mom has sold it and moved into a beautiful new place.  A new beginning for her.  I had asked Greg earlier if he had wanted to go say good bye to his old home and he never said much about it.  However, Gail had some stuff left in the basement that he had to go through to decide if he wanted to keep it or dump it so we went.   When we arrived there and he saw the empty house save for a few boxes in the storage room, he was sad to see the house go.  We said our final goodbyes and headed over to her new place.  I love love love everything about her new place and I am happy she found such a great place.  But it was definitely bittersweet for them all.

We also spent Christmas Eve at my Sister's place and had 2 christmas meals and gatherings with Greg's Grandparents on both sides which meant for a full boxing day.  I didn't take many photos this year and what I did I posted on Instagram but this might be my most favourite photo of our time back home because it was a true description of how busy we were while in SK 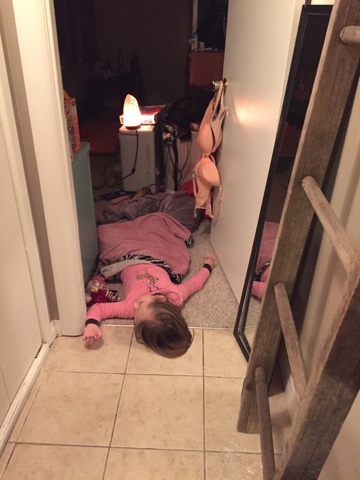 She was so tired that she fell asleep right in the door way haha.
at December 29, 2016
Email ThisBlogThis!Share to TwitterShare to FacebookShare to Pinterest
Labels: Christmas, Saskatoon