While we were in Disneyland we went and saw Santa Claus.  It never even occurred to me that this could happen even though I knew it was Holiday Disney.  On our first day there, Greg was looking at the schedule of events and sure enough Santa was in the Winnie The Pooh area that day.  So while we had a break between rides, we went and got in line to have our photo taken with Santa.  We only had to wait about 20 minutes which is less then what we waited for Santa at Chinook Mall last Christmas. 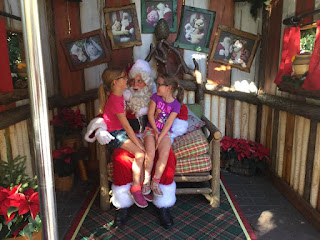 Chatting with Santa on whether or not they have been good this year.  I don't know if they were completely honest with him haha. 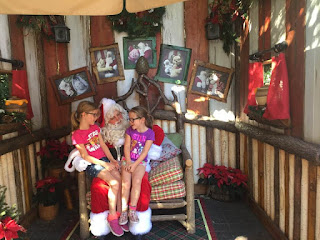 He asked them what they wanted for Christmas and they didn't know other then some snow globes so he told them to write him a letter and send it to him at First Castle On The Left at The North Pole so that's what they did a few weeks ago. 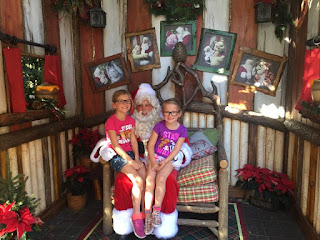 We used our photo pass for these but for some reason when I paid for them once we got back to Calgary, these were missing from my download.  I have emailed Disneyland Photopass to see if they could track them down for me but so far I have not heard from them.  These ones did turn out ok on my iPhone so it's not too terrible.  It would have been worse had I not taken any with my iPhone.  My only regret is that we didn't buy the Minnie Mouse ears before we got the photos with him done. 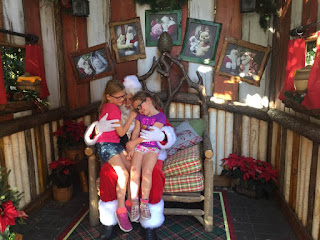 Saying goodbye to Santa Claus.  Getting photos like this with him and with their favourite characters are my absolute favourite.  So much more real and sincere then the posed ones which are the ones the photo pass ones tend to capture and thus missing out on the real magic!
at December 07, 2016
Email ThisBlogThis!Share to TwitterShare to FacebookShare to Pinterest
Labels: Christmas, Santa Claus