I had asked Greg for a bike trainer for Christmas despite only having a mountain bike and a cruiser bike and not a road bike.  With some tweaking, a mountain bike can be successfully used on a bike trainer.  When we started looking at bike trainers and doing some research, it was so overwhelming.  Would they fit my tire size? Would it destroy my tire? Would it be way too loud?  Was the difference in price worth it in terms of value???  I went online, I was on Amazon and Kijiji weighing my options on what to do.  I decided to post an ad on my local buy n sell site even though I wasn't expecting to hear anything when I got a private message a few hours later that there was a lady selling hers.  She lived about 5 minutes away from my house and she was selling hers for $25 since she was moving and never used it, she didn't want to take it with her.  She even had a training tire for me but unfortunately her wheel was 26" and mine is 27.5".  It was a perfect fit for my bike and I was super excited! 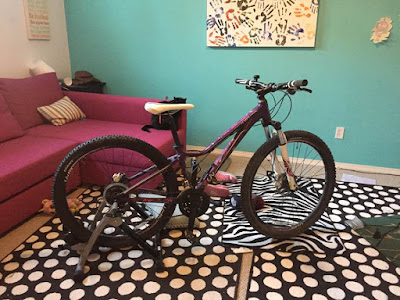 A week later, Greg set it up in the basement for me.  The back wheel fits in the triangle like stand and somehow prevents the front wheel from moving.  A question posed to me a few times during my venture of finding one was why do I want a bike trainer since I am a runner and I have zero interest in ever doing a triathlon??  Stationary biking is really good for keeping my knee nice and strong and it's a good way to keep my cardio up on cold days when I don't want to run outside or for a long distance on my treadmill or if my ankle bothers me.  And one day I would like to do a duathalon too. 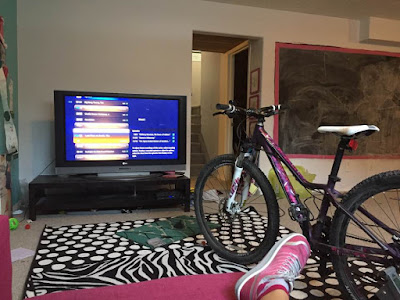 The bike trainer is super loud since I have my normal tire on it and originally, I had my bike trainer set up in front of the TV in our basement, much to the dismay of the girls.  I had to keep the TV ridiculously loud and I had to stick the remote in my sports bra so I could fast forward through the commercials because they suck.  I didn't enjoy this set up.  Also the seat on my bike sucks.  My bum hurt so bad after the first 2 times I rode it that I used a pillow the following time.  But if I kept doing that then my bum would never get used to it so I never used it again.  I also contemplating taking the seat off my cruiser bike because it is amazing and putting it on this bike but I never did do that.  Mostly because I have no idea how to and there was no way that Greg would ever do that for me. 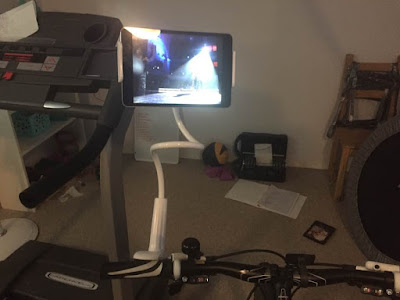 I really wanted to watch my iPad like I do on my treadmill but I couldn't figure out a set up that worked for me.  I mentioned this to Greg and he googled and found a plethora of them on the internet and I ordered one from Amazon and had it a few days later.  It was pretty easy to install and it works perfectly.  I have finally surpassed the 20 minute mark on my bike trainer yesterday and rode for 30 minutes and my butt is only a little sore this morning.  I love biking outside and can bike for hours so I thought biking on my bike trainer would be similar.  I thought it would be easier then running on my treadmill but it is really no different - I get bored just as fast.  But 30 minutes on my bike trainer is better then 0 minutes of any exercise at all so I won't complain.  Sweat is sweat after all.