We  hadn't been to Banff since we hiked Helen Lake back in September and I sprained my ankle.  This was the longest we have gone without heading to the mountains for one reason or another but Finley and Penelope's soccer takes up most of our weekends. 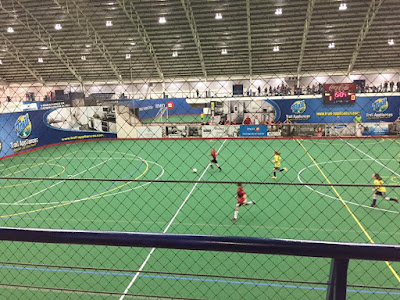 However, this past Sunday so Finley with an 8:20am game and Penelope with a bye week so we decided to take an advantage of an almost free Sunday and head to the mountains.  Finley played a really good first half - probably her best half of soccer this season - but the toll of  having a soccer practice Friday night and tech training Saturday morning and now this game really hit her in the second half.  She was tired and it showed.  I thought for sure she would sleep on the way to Banff but she stayed awake the whole time.  Penelope, on the other hand, slept most of the way. 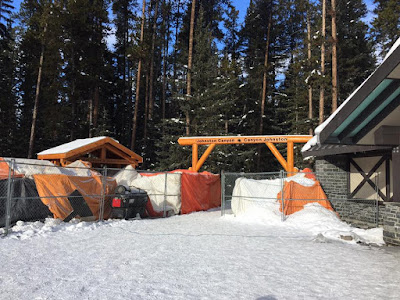 We decided to do Johnston Canyon and hike up to the Ink Pots.  We have never made it to the Ink Pots and thought this was the perfect opportunity.  There are 3 different sites you can hike to when doing Johnston Canyon: 1.  Lower Falls which is 1.1 miles from the resort which is basically a 5 minute walk from the parking lot 2.  Upper Falls which is 1.6 miles from Lower Falls and 3. Ink Pots which is another 4km from Upper Falls.

Directions: Follow the Bow Valley Parkway west from its eastern interchange with the TransCanada Highway 17.5km to Johnston Canyon.

We love Johnston Canyon but only will hike it from October through until May because in June, July and August and probably September it is INSANELY BUSY!!!  The parking lot is always full and you end up walking forever to get to the start of the hike.  The pathways getting to any of the 3 points is very narrow and in order to let people come back from the other direction, lots of the time, you have to come to a complete stop to let them pass you by.  It is awful.  If you can only come to Banff in the summer and really want to see it, I highly suggest you come early in the morning or later in the day so you can beat the rush.

As you can see, the entrance to the Canyon is still under construction as they closed the entire thing late last year for upgrades to the railing.  From what I can tell that is all finished and they re-opened it to hikers.  Greg thinks they are just now improving the entry and the information area.  They have a fully plumbed bathroom area that was only open during the busy months and in the winter months you had to use the outhouses but with this construction they removed them completely and kept the real bathrooms open year round.  The only downside to the real bathrooms is that the water to wash your hands is colder then the actual mountain water.  No Joke hahahaha. 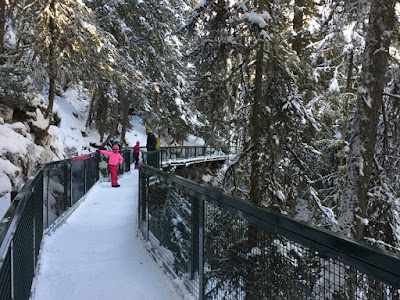 Here we are on our way to Lower Falls and you can see the  new railing that they have installed.  It is a much nicer railing and covers a lot more then the old one did.  The entire trail to the lower falls was snow packed like this so I have no idea if they replaced that or not.  I sure hope so because the trail was so super slick and awful all the time.  The first time I ever did this hike back in August 2004 right before we moved out here and it was a nice sunny day and the trail was wet from splash from the water falls and a lady slipped and fell and broke her arm.  You always have to be careful when hiking this trail regardless of the season. 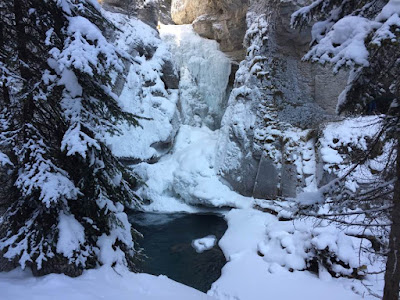 Lower Falls!  It's amazing how beautiful it is all snowy and frozen.  This is where the most people hike to and then turn around and honestly, we usually do too.  I don't care for Upper Falls.  I find the hike to the falls to be ok  but I am constantly disappointed with the payoff.  There is little I hate more in hiking is no pay off.  Greg thinks I am weird but really whats the point???  Greg and I both tried to remember when we hiked to upper falls last and neither of us could remember and neither child remembered ever going there so clearly it has been awhile. 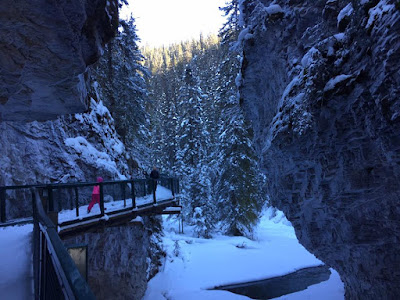 This might be my most favourite photo I took all day.  You get a shot of the canyon, the snow covered trees, the frozen mountain water with a small break in it, the cliff and a certain 6 year old dressed in pink.  This was just passed the corner to upper falls from lower falls.  Perfection if I don't say so myself. 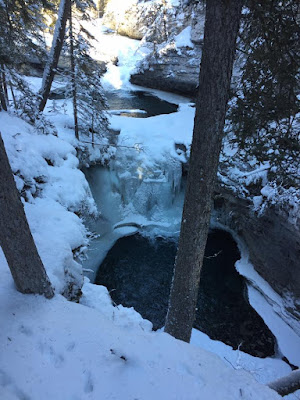 Another amazing view on our way to Upper Falls. It truly was a great day to be in the mountains,  the air was clean, the sky was clear and the sun was shining and it wasn't even too cold. I absolutely love how portions are frozen and portions are not.  It just adds to the beauty of it. 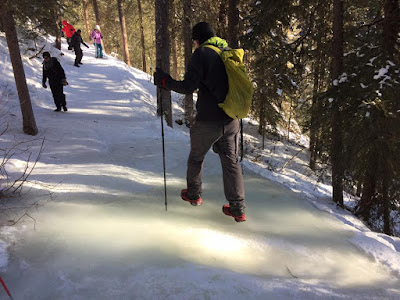 This was the only icy section of the entire trail and I can only think because it gets the most sunlight? It was a strange section and thick like a skating rink kinda of section.  On the left, there was a path that the majority of people used except for "hard core" hikers like Greg haha. 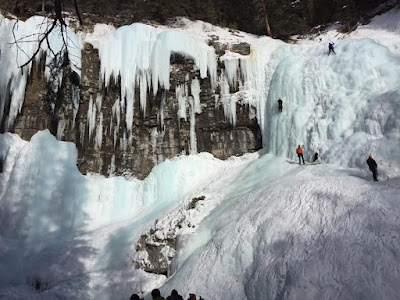 Finally made it to Upper Falls and I gotta admit that Upper Falls in the winter is a bazillion times nicer then Upper Falls when they are not frozen.  I loved seeing how many people were hiking down below and all the ice climbers.  I have mad respect for ice climbers - it looks both amazing and scary as hell.  Grotto Canyon also is fun to watch people ice climbing.

From here we were to head further up to the ink pots but again it was not in our cards.  Finley was tired and I don't know if she would have survived 4km to the ink pots and then the rest of the way back down.  Plus by the time we got back down to the parking lot, my foot was sore as it was the first hike I have done since I sprained my ankle.  Greg said it was just my stabilizers and that this was probably good for strengthening them so hopefully he is right.  They felt fine Monday when I woke up so I am not too worried about it.  Definitely go see Upper Falls in the winter if you ever get the chance.

Since we decided not to do the Ink Pots, we decided to head to Lake Louise where they were having the Ice Magic Festival.  Basically they were having people making ice sculptures and you could watch it happen or watch the finished results depending on when you got there. 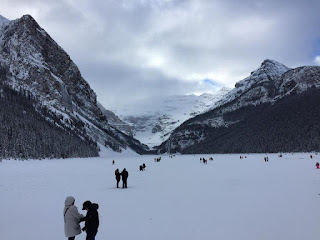 Everytime we got to Lake Louise I get this same shot.  I love it.  So much magic right here. 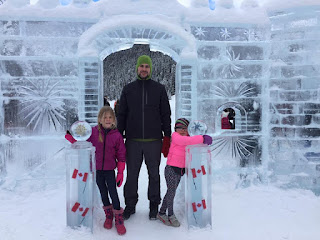 Greg and the girls on the Ice Castle that was built on the ice of Lake Louise. 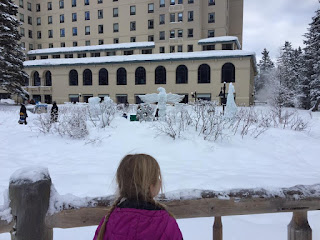 So what we didn't know was they charge for entry into the festival.  We have seen the ice sculptures before but always after the ice festival ends so we just assumed it was free to see them but it turns out it is $10 per adult or $25 per family.  And it was cash only.  Now I don't know if this was just Greg and I being cheap but we both thought that $25 seemed a bit rich to see a few sculptures so we opted not to pay for it and watched from the sidewalk.  Had it been like $10 to get into the festival, we totally would have been on board.  The Ice Fest runs until January 29th if you want to go pay to see the sculptures or wait until after and they will be free :)
at January 25, 2017
Email ThisBlogThis!Share to TwitterShare to FacebookShare to Pinterest
Labels: Banff National Park, Canada 150, Explore AB, Hike AB, Hike With Kids, Johnston Canyon, Lake Louise, Outdoors