We have this empty wall space between the fire place and the wall to the right.  I am almost positive it has been empty since we moved into our house nearly 9 years ago and we never even noticed it until sometime this year.  I think it was because we had black IKEA hidden shelves to the left of the fireplace and now we have this white abstract shelving unit and so it is much more noticeable against the dark wall.   Before christmas, I temporarily took the blanket ladder from our bonus room and put there but I didn't want to put it back because the ladder damages the wall being leaned against it and this paint is no longer available in Canada since Totem was bought out by Rona several years ago and I really really love it.  So I a few days after Christmas, I was walking through Michaels and they had all their canvases 40% off or maybe it was 60% off, I don't remember really.  Either way I was sure if I followed through with it, it was going to be a massive waste of money.  I grabbed some black, grey, white and some teal paint for a splash of colour and went home.  Greg and Finley were going to Rogue 1 and I thought it would be a great project for Penelope and I to do. 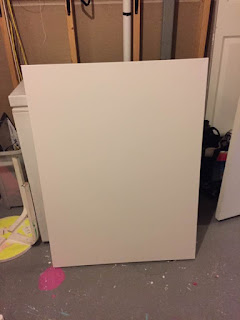 A blank slate.  I was still worrying about wasting all my money at this point haha. 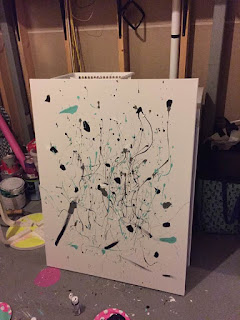 I decided to go with splatter paint since I knew it was the easiest to do and not look like a toddler did it, like most of my work usually goes hahahah.  It's ok because I know that I lack this life skill of creativity and bringing art to fruition.  I have accepted this for the most part.  This was my first and only splatter as Penelope took over from here on out. 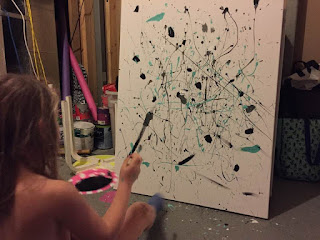 She got naked save for her socks and underwear and went to town.  She had so much fun and had a blast going between all the paint colours and throwing them against the canvas among other things.  She used all the paint in all the containers until we couldn't get a single drip out.  Jackson Pollock must have used a lot of paint to get so much coverage on his paintings.  We have a reprint of his paintings on a canvas that we bought 10 years ago and we still have it.  It's like the oldest piece of anything that Greg and I own. 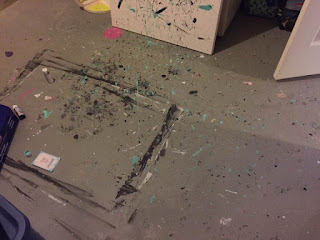 Finally she ran out of paint and went upstairs to have a bath and I was left to clean it up.  She had so much fun and if you looked into our storage room, you would see visual proof of this.  The black rectangle was from a chalkboard I made a few months ago and the pink paint was from a mishap a few years ago but the rest was all her.  She even got paint on the furnace, hot water tank, deep freeze, door, and walls and I got it all off which was good because even though this is the only place Greg allows me to paint, he still doesn't like a paint splattered floor.  She even managed to get paint in her behind her head and on her butt haha. 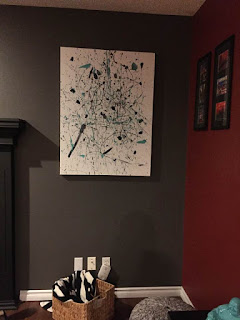 We let it dry and Greg hung it up after he got home.  He didn't love it and thought it should go in the basement where nobody would see it but Penelope and I insisted that it be hung on our main floor.  It's not the greatest work of art but trust me I have done WAAYYYYYYY worse too hahaha. 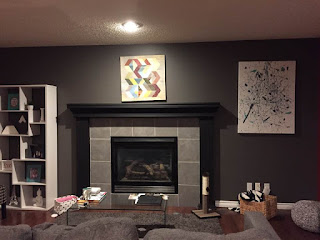 Here is a photo of the wall I was talking about earlier, I love it now.  I told Greg the other day that it just might be my most favourite wall in my house now.  My second favourite wall is in our master bathroom with the new mirrors and light fixtures we hung earlier this year.  I don't much love the art above the fireplace but I don't hate it so it will be there for the foreseeable future and besides it is one of the few pieces I have left from the golden Target days.  Oh, how I miss that store.....

Anyways, I am pretty happy that the empty space is now filled with a semi great piece of art made by me + Penelope.