It was another busy weekend around here and it got off to a rough start on Friday morning when I woke up and felt great, took the girls to school and then came home to get ready for my 9:30am bootcamp class when out of nowhere, my vision went blurry and almost non-existent with insane pain behind my eyes and on the side of my head for about 20 minutes and then turned into a migraine with intense sinus pain for the rest of the day into Saturday.  Except for leaving the house to pick the girls up from school, I spent the day Friday taking turns between my bed and my bathtub which as you can see Pizza loves. 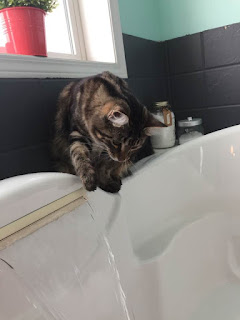 One of the girls on Finley's soccer team lives about a block or three away and we take turns once in awhile driving the girls to practice and tech trainings and thankfully her dad was taking Finley Saturday morning because I still wasn't feeling great.  Greg took Penelope to her tech training and I stayed home and laid on the couch until Finley got home and I had to get ready for a birthday party that afternoon. 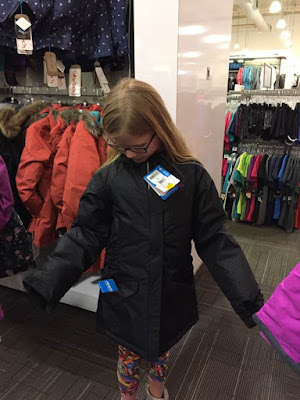 On our way to the birthday party, Finley and I stopped at Sportchek because they had all their winter jackets on clearance and finley needed a new one for next year.  Unfortuantely, from what i can see, size 9 jackets are almost non-existent and they jump from a ⅞ to a 10/12.  I like buying winter jackets on sale the year before but I still might take this jacket back because it just seems to so big.  Finley really loves it though so it might be hard.  While we were doing this, Greg and Penelope finished up her tech training and were getting lunch and groceries before heading to the Calgary West Soccer Centre for her Mini Fest game.  There are no photos from this because I was not there but Penelope had a really great last game of the indoor season and scored 2 goals as her team won 7 -5 or something like that.  I will talk more about her soccer season later this week or early next week. 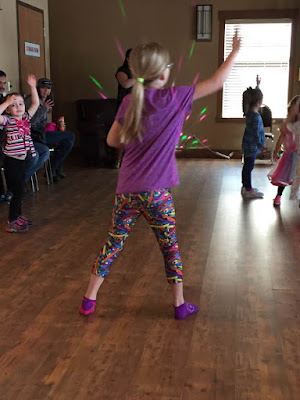 After we left Sportchek, we headed over to Auburn House for Little Miss Haylee's 5th birthday which is today.  She had a Zumba party which was fantastic and all the kids loved it even if most of the kids had no coordination.  No judgement from me since I have none either.  After her party ended, we went over to her new house that her family is building to see all the progress that has been made.  It is almost move in ready for them! 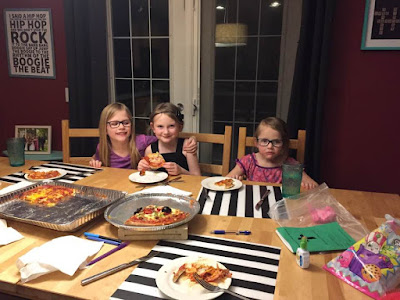 After we left the new house, we came home and brought Haylee's big sister home with us.  It was supposed to be a playdate but turned into a sleepover.  All three were having their first real sleepover with friends and they were so excited.  Greg went and got pizza from Sobeys for supper and the girls had fun tormenting Pizza the Cat and making huge messes around the house.  They slept in our bonus room altogether although around 1am, Finley woke up in pain and moved to her bedroom.  More on t that later.  We let the girls stay up until 10pm and they were all asleep by 10:15 which was good since they had to get up early for Finley's last regular season game of the season which started at 9am.  Finley's team won the game and finished 1st overall in their tier which has given them a first day bye of the City Championships next weekend. 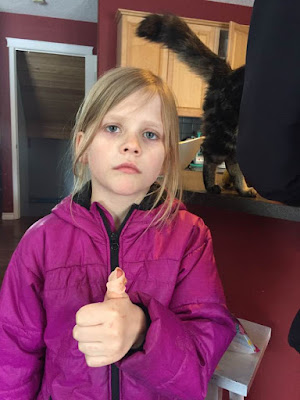 After the soccer game, Me + Saydee + Penelope came home so they could play and have lunch while Greg and Finley went to urgent care for her thumb.  What happened to her thumb? Well apparently she didn't learn from Penelope's Thumb Problem from chewing her nails and did the exact same.  Instead of crying out in pain like Penelope did, Finley simpered the entire night and it was awful.  I got no sleep and neither did she.  Because we had experienced this last month with Penelope, we took her in right away and hopefully caught the infection quicker and it shouldn't result in losing her nail like her little sister did.  Finley got home right after Saydee went home and she had a long bath and has virtually spent the entire day in bed watching her iPad and having catnaps catching up on lost sleep.  She was super grouchy so this was a good thing.

We took it easy for most of Sunday afternoon, we cleaned up a bit, did some laundry and watched the Daytona 500 before we started watching the Oscar Red Carpet before dinner on the iPad (YAY for Shaw Free Range TV App). 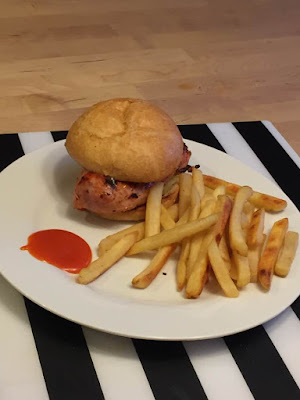 For supper Sunday night, we had Chicken Monterey Sandwiches with french fries dipped in Catalina dressing in honour of Bonanza Family Restaurant which had a fire on Monday evening that was pretty destructive.  This is their signature dish and since Greg worked their for years, he can pretty much nail it.  The only difference is that Bonanza's french fries are so much better.  Bonanza is where Greg and I met and I loved my time working there and all the friends and people I met along the way.  It was much more then a restaurant, it was my family for so many years.  I hope that no matter what the future holds for Gary and all his staff, that they rebound quickly. 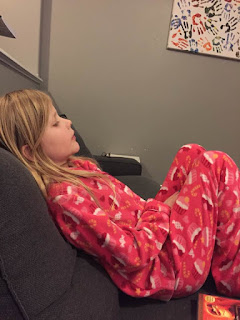 Finley left her room briefly for supper and to watch Justin Timberlake open the Oscars with his Trolls song which is one of her most favourite movies and then she went back to her room and could be asleep for all I know as I write it.  Penelope is beside me singing to Justin Timberlake's song on her iPad but she did stop to watch the Moana performance and was blown away by it.  I love that. 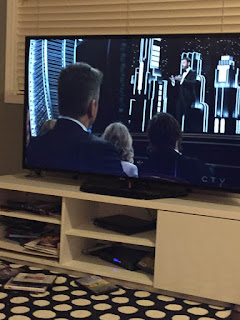 I finished off the evening and weekend watching the Oscars even though I have not seen any of the movies nominated for movie of the year.  I did watch 2 of the nominees for best documentary feature: OJ: Made in America, which won and is available on Crave TV and 13th which is available on Netflix Canada.  Both are fantastic.  I have seen 2 of the Animated Feature Films: Zootopia (which is another one of Finley's absolute favourites) and Moana.  I have seen Trolls which was nominated for best song or something like that.  It's a good thing I have kids so I have some oscar knowledge hahahahha.

Hope you guys had a fantastic weekend!!