Last Thursday was Greg's 36th birthday.  He wanted to celebrate it at the Longview Steakhouse in Longview.  Longview is about 45 minutes south-ish (not sure on this but I think so, i have zero sense of direction unless i can see banff in front of me haha).  We had driven by it numerous times but thought nothing of it.  Greg belongs to a forum and one of the topics was local restaurant gems and someone suggested this and many supported it.  So I called and made the reservation and we drove out there. 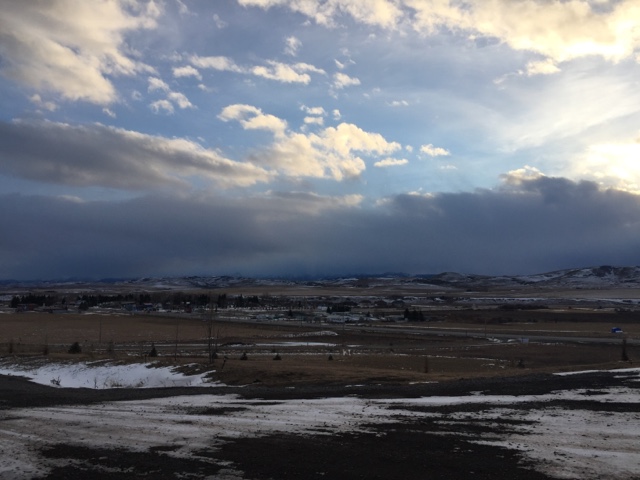 The scenery is beautiful from the steakhouse but even more beautiful I bet if there was no cloud or fog. 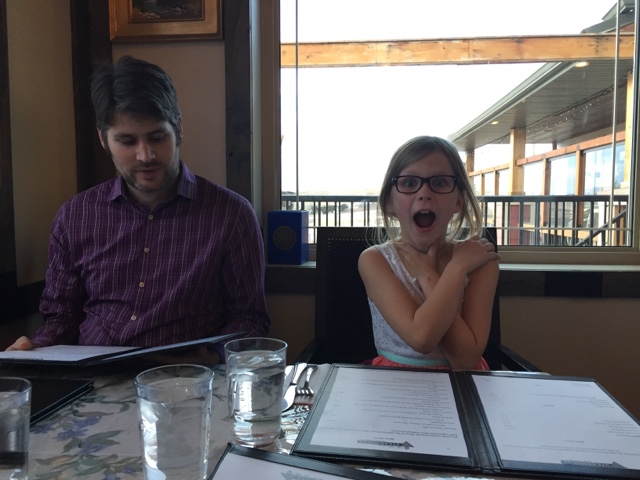 Greg and Finley pursuing the menu.  Finley really wanted steak but steaks were too expensive so she shared with Greg and I since Penelope refused to share with her or anybody haha. The entire restaurant has wide windows like this and the views were amazing. 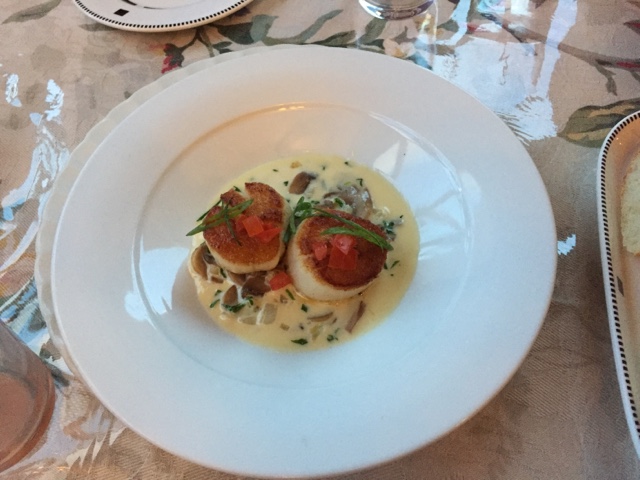 We started off with these scallops and they were amazing.  They were perfectly done and oh so thick and delicious.  I didn't have any of the cream sauce because I hate creamy stuff but Greg said it was really good. 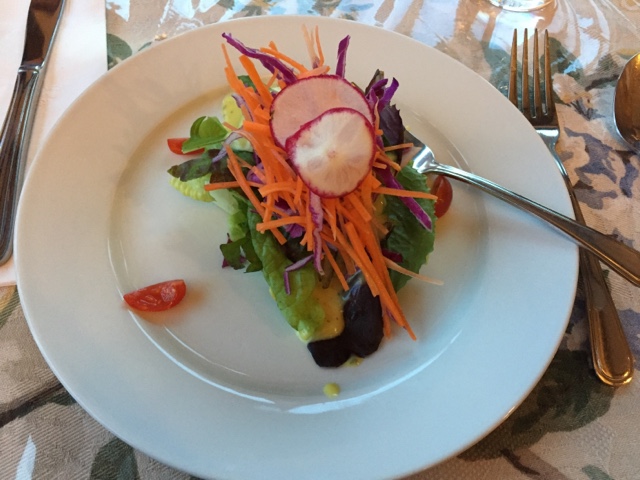 You can barely see it, but the dressing on this salad was so good.  It was mustard based salad and was more bitter then sweet so very little sugar in it and but so tasty. I wish I knew what all was in it so I could make it for my lunch today. 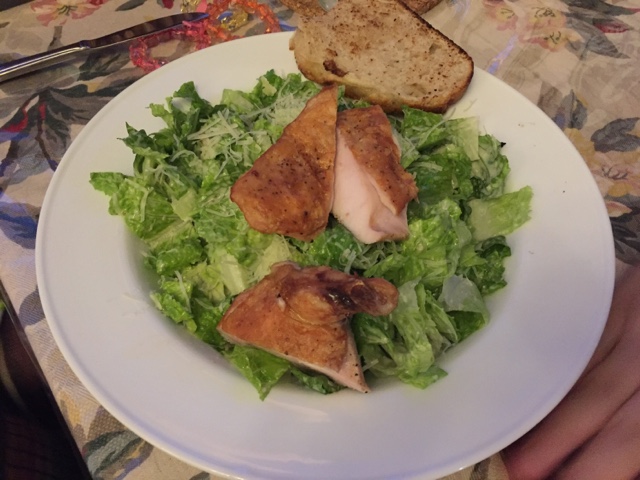 This was Penelope's Chicken Caesar Salad.  It was huge and delicious.  We all stole bites from her salad.  Even the chicken was great which is rare on a caesar salad.  She let Finley have a little extra but she eventually said nobody else could and packed it up in a to go container and had it for lunch on Friday.  Greg tried to convince her to give it to him for lunch but she refused.  So you know it was amazing for her to be like that. I wish I had remembered to take a photo of this before I destroyed it haha.  Greg and I ordered the Chateaubriand Bouquetiere for Two and shared it with Finley.  I can't even begin to describe how amazing this meal was.  Like probably top 2 for best steak EVER.  Everything about this meal was fantastic.  I am drooling over this just looking at these photos and thinking about it.  I can't wait to go back. 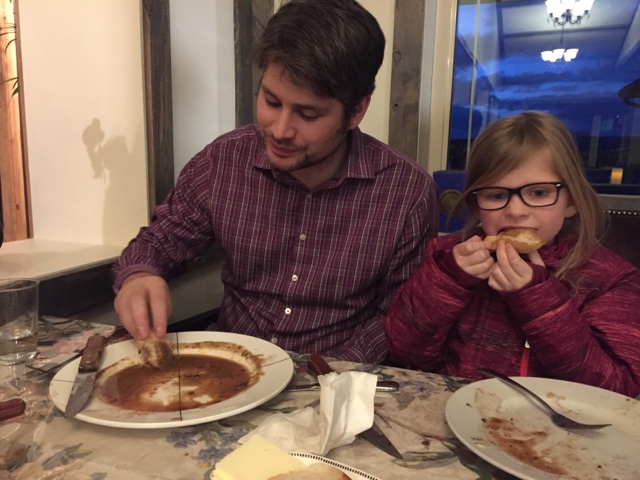 The sauce on our meal was insane and apparently it is very popular that the guy who owns it asked if we wanted bread to soak up the sauce and eat it.  Greg died and went to steak sauce heaven.  Before they brought us more bread, Greg asked if it would be acceptable to drink the sauce like you would the milk from a bowl of cereal.  Both he and Finley polished off the bread and all of the sauce. 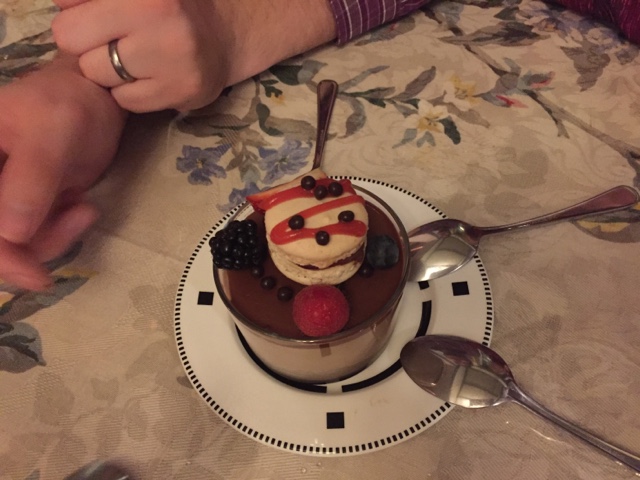 For dessert, we ordered the Chocolate Mousse that came with a macaroon on top that Greg let me have.  The mousse had layers of fruit and crumbs and was so rich and decadent and amazing.  Too rich for Penelope though because she didn't like it much.

So this restaurant which is located in Longview, is open Tuesday through Sunday from 5pm to 8pm.  It is a very small restaurant and reservations are a must.  We were there on a Thursday at 6 and there was only one table not filled.  I believe it is owned and ran by a husband and wife team and there 2 kids.  They live below the restaurant and then upstairs is the restaurant plus 4 hotel rooms and 1 suite.   I would love to come stay here over night and eat there again.  It is well worth the drive from Calgary to eat here and absolutely recommend that you do so immediately. 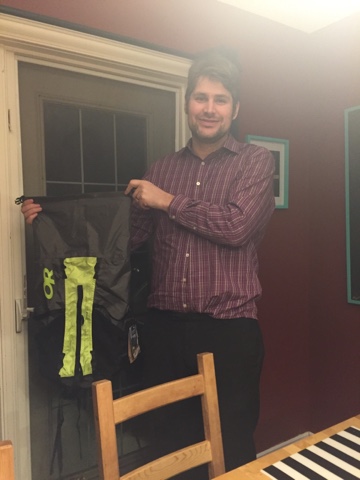 Here is Greg with his birthday present from the girls and I.  However it is going back because he doesn't like it.  He actually picked it out and ordered it so I take no offence to it.  It doesn't fit him right and the one he really wanted went on sale after he ordered it so he bought that one too.  It's a new day pack for short hikes and such. 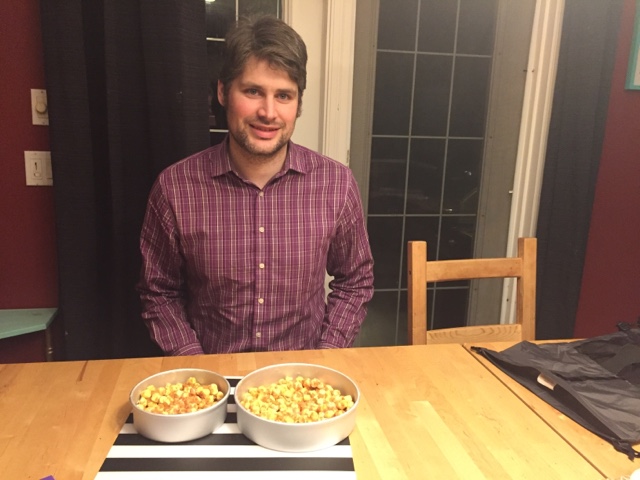 For his birthday cake, we made him butterscotch confetti and the girls covered it with sprinkles.  Because all cake deserves sprinkles haha.

Normally we invite his family over either the weekend before or the weekend after his birthday for a little get together but soccer has basically consumed our life and we really had no time to make this happen.  I felt bad but when I told Greg that I didn't organize anything he didn;t care and like me, was too tired to entertain anyways.  His mom is coming down to visit later this month so maybe I will make a birthday cake for him then.  A nice sugar free one hahahhhahaha.
at March 07, 2017
Email ThisBlogThis!Share to TwitterShare to FacebookShare to Pinterest
Labels: Calgary, Greg, Local Eats, Longview Steakhouse, YYC