We always knew Finley would knee braces, we just assumed it would be when all her baby teeth fell because that was standard and that was what our dentist kept telling us every 6 months when Finley would go in for her check ups.  Last summer, our dentist sold her practice and so we saw a new dentist who again said the same thing.  When we went back 6 months later in March, we saw a different dentist at the same location and she was concerned about the lack of space at the back of her mouth.  There was just no room for adult molars to come in.  She had no idea what action the orthodontist would take since she was only 8 but she said there was no harm in going to see one to get the process started.  She is now my favourite dentist in the whole world. 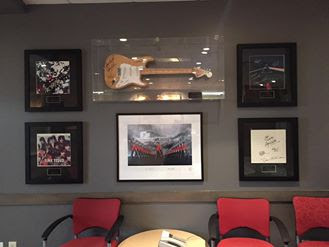 We were referred to Harfield Orthodontics which is only about a 15 minute drive from our house in non rush hour traffic.  Walking into this office was like walking into what I imagine the Rock N Roll Hall of Fame looks like in Cleveland.  The memorabilia is insane and so cool.  He has guitars, suits, record albums, movie posters all autographed by those who wore, starred or sang on them.  It is amazing. 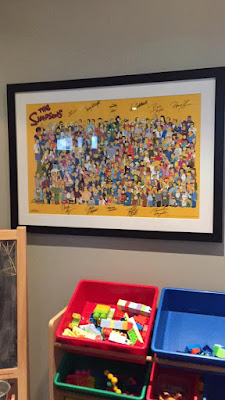 This was in the kids corner.  Finley loved it all even though she has no idea who anything or anyone was - although she recognized the simpson poster from crusty land at Universal Studios. 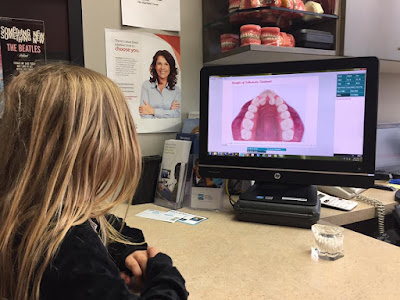 Our first visit was just a consultation and it took place last Tuesday.  They took X-rays and photos of her teeth, which she got to keep and which she thought was crazy cool. The Dental Assistant showed her all the different kinds of braces that exist and then Finley watched a video about teeth. She liked it but I tuned out haha. 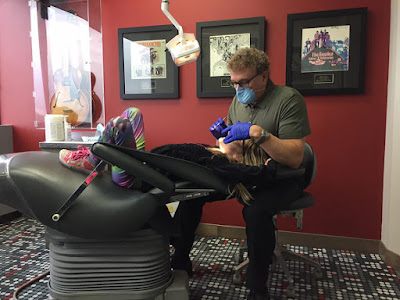 Dr Harfield came in and went over the photos with Finley and I.  He was really good at getting Finley involved and knowing what was going to happen with her teeth.  I really liked that.  He asked her why she was at the orthodontist and she said it was because her top teeth were all squishy.  He liked how she called her teeth squishy.  He then asked her if she knew which teeth were causing the problems up there,  she thought it was the tooth on either side of her 2 front teeth since they were pushed in the most.  He said that everybody he asks always says that it is those teeth but her real problem were her 2 front teeth.  She has a deep overbite (how was not this discovered by our dentist(s) and her teeth were causing imprints on her mouth.  Her front teeth were pushing forward.  The good news was that it was a relatively easy and (somewhat) inexpensive fix.  She would need to wear braces on her top 6 teeth for 6 months and that should move her teeth back to where they need to be and make room in the back for all of her adult teeth to come in.  Once the 6 months are up, she will have to wear an appliance every night until all her baby teeth fall out.  Once that happens, then she will go back and they will reassess her teeth.  If this does not work and she does need a full set of braces, they will apply half of what we paid for these braces as a credit to the new ones.  Fingers crossed that does not happen.

We had the option to pay in full and save 10% or put down a lump sump and then make a monthly payment for 6 months.  We chose to pay in full and save the 10%.  We do have good orthodontic coverage with Greg's insurance plan but they will only reimburse us as if we paid a down payment and subsequential monthly payments.  This isn't a big deal but just more surprising.  Apparently this is common for all insurance companies.  The things you learn. 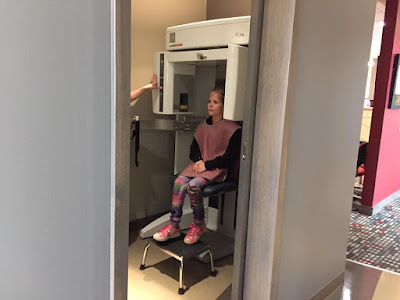 I know a lot of people go and meet several orthodontists before picking one, but we were so impressed with Dr Harfield and all of his staff that I immediately knew that this was a great place for us.  So we booked an appointment for that afternoon so that she could impressions done of her teeth.  She was so excited.  When we went back for the second appointment, she had another set of X-rays done on her mouth.  Penelope was jealous when she heard about this and now wants to get X-rays done like this. 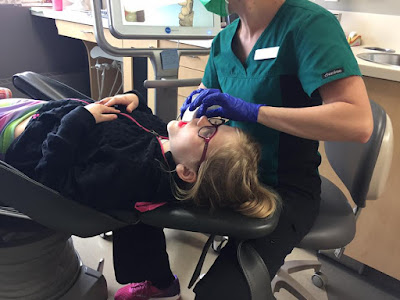 Instead of using molds to get her teeth impressions, it is all done digitally with a camera inside her mouth and then they showed up on the screen.  They did her left side, her right side, the top of her mouth and the bottom and then with her teeth closed. 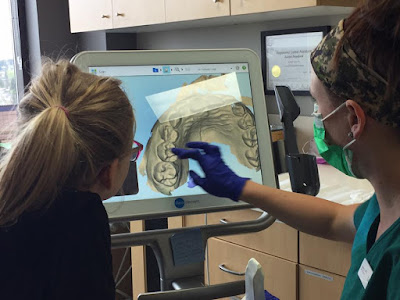 After each time, they let Finley sit up and watch the images on the screen.  She thought this was the coolest thing.  And just like that her impressions were done and no yucky mood stuff in her mouth either.  Now all she had to do was wait another week to get her braces on the following Tuesday. 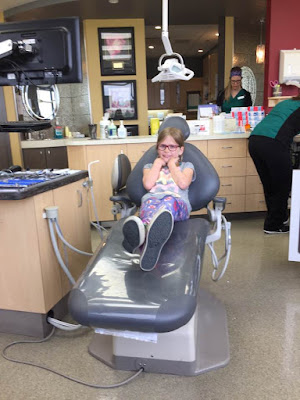 Moments before getting her braces on.  She was a little disappointed that she didn't need elastics because she really wanted to change the colours on them regularly haha.  She was still a little nervous about the whole thing too. 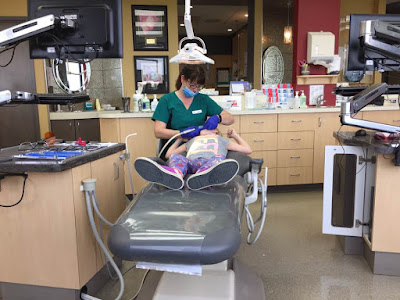 They polished her 6 teeth that were getting the brackets on.  This took minutes like maybe 2 minutes haha.  They are very efficient. 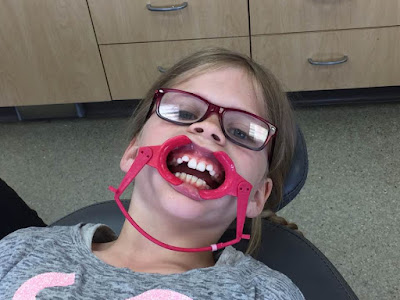 Then they put this in her mouth so it was easier to have her mouth open for the brackets and wire.  It also helps keep her gums and teeth dry which is important for getting the braces on.  This looks like the hyped version of speak out or whatever that game is called.  She had to hang like this until Dr Harfield came to put the brackets on. 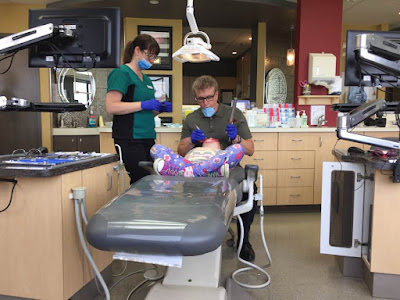 It took him all of like 3 minutes to get all 6 brackets on.  Easy Peasy and no needles which was Finley's biggest fear even though we told her that there would be no needles here.   After Dr Harfield was done, she put on the wire across the top that helps shape them or something? Sorry I don't understand the dental industry or speak. 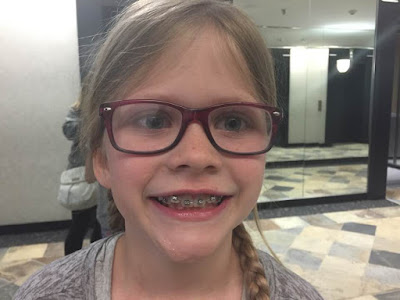 We were in and out about 30 minutes with her brackets on and a parting gift bag.  You can tell on her mouth where her teeth kinda go up - they suspect that those 2 brackets will cause her the most grief on her lips so she will have to use wax on them should she get an irritation on her lips.  She was so excited to have her brackets on and couldn't wait to get back to school to show her friends.  When 2 of your older cousins also had braces, it certainly adds a cool factor to them. 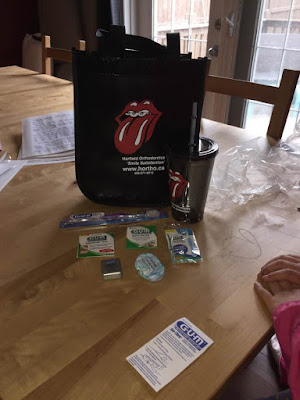 They gave Finley a reusable shopping bag with a cup (and they got one for Penelope too) plus a tooth brush, a couple types of floss, a stick to clean under her brackets and some wax.  Not shown in this, is another container of wax and a stick for under her braces that she has to keep in her back pack at school.

So as excited as she was to get braces, here is why she no longer as excited.   Here is a list of foods she can no longer have:

The toughest part about this list is that it is camping and backpacking and hiking and lots of times they have nuts, jujubes, liquorice and chips and doritos at the campsite.  It's gonna be tough and Finley is unhappy but we reminded her last night how lucky she is that she may only need these for 6 months because one of her soccer teammates is currently on a 7 year plan and  has jaw expander in her mouth.  She realizes that she is lucky but at the same time she is only 8 and this all kinda still sucks for her.  Here's hoping that we survive the next 6 months without any bracket fails or meltdowns.

at May 17, 2017
Email ThisBlogThis!Share to TwitterShare to FacebookShare to Pinterest
Labels: Braces, Finley