I have struggled with finding a running hydration system that I actually liked.  I actually started this post about 2 years ago and it has stayed as a draft until I found something that I liked. 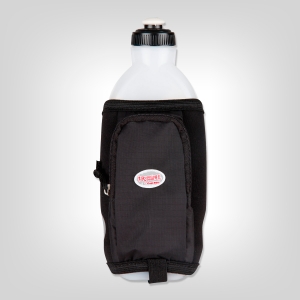 I bought on like this from the running room.  It has strap on the other side of the water bottle that you can put your hand through it and carry it that way.  It seemed like a great idea but the inside of the strap had weird material and it irritated my hands and became impossible to use.  I sold it shortly and started looking for something else.  Visits to running stores showed me that every brand that I saw had the same material on the inside which wouldn't work for me. 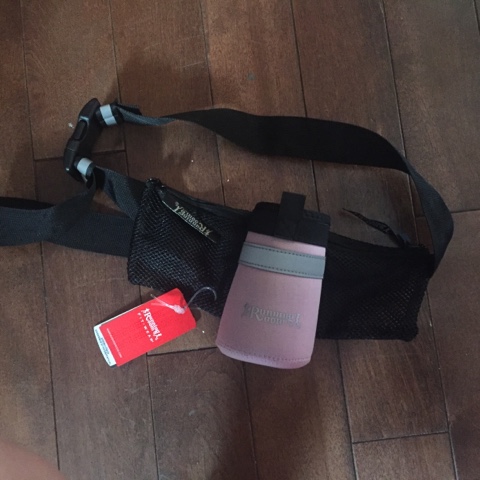 I was at the running room looking for something else and saw this on sale for $5.  I thought it was a great deal and worth the risk to give it a try.  I brought it home and gave it a try and it bounced when I ran so it was a no go.  It, too, got sold. 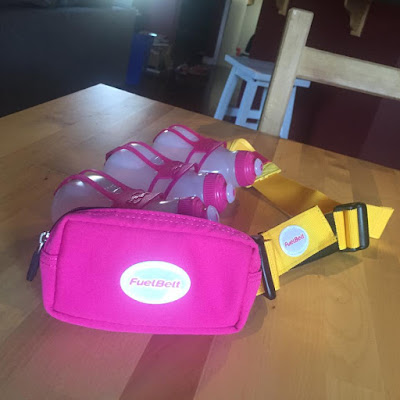 I bought this one brand new with tags on Kijiji after seeing the price of these in the running room.  They were selling for $25 but I got it for $20.  I tried running in it and it too bounced.  I was bummed and sold it to someone on a local buy n sell site.  I then bought a similar one on the same site but a different brand but had the same problem.  This was last spring that this occurred. 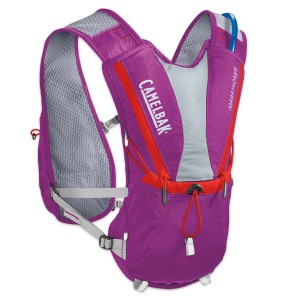 I decided I needed something like this but wasn't willing to swallow the price and drinking out of a water bladder is the grossest thing ever.

Easter weekend, Greg and I were at MEC and I actually tried on the Ultimate Direction Adventure Vesta. 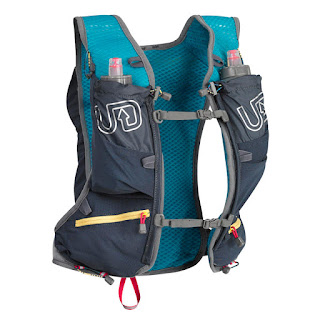 The fit and comfort and so amazing and it had water bottles that fit in the front and then places for your iPhone and your gels or whatever you wanted to use it for.  I was in love with it but not it's $185 price tag.

So I sadly put it back on the loop and looked at other options I had.  The ones in the price range I was comfortable paying were all the belt ones but I told Greg I didn't like them but I tried on a saloman one: 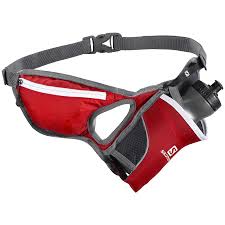 The one I tried on was black and I was sure I was gonna hate it because I knew it would bounce like all the other ones and it sure did but Greg was like you are wearing it wrong. It turns out it isn't meant to go around your waist but above it around the small of your back.  Once I was moved I moved it, I was like oh I get it now  haha.  I could never figure out how other runners liked the bounce of it.  Now that I knew how to wear these hydration belts I was like let me try on more.  I didn't like this one with the big water bottle on the back.  I would rather have my  water weight distributed around my body instead of in just one place. 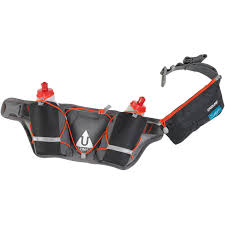 This was the Ultimate Direction belt and it fit good and the price was decent but I didn't love the colour and wanted to see what my options were at the running room before I committed to a colour I didn't love.  But now that I knew how to wear these properly I was very excited.

So the following Monday, I went to the Running Room in Shawnessy to look at fuel belts.  The Fuel Belt brand didn't have a pouch big enough to fit my iPhone which is a deal breaker.  The guy working there suggested a Nathan brand one and it came in pretty colours and fit my iPhone.  He said it was the best fuel belt on the market right now because it wasn't a velcro closure but clips.  So I bought it: 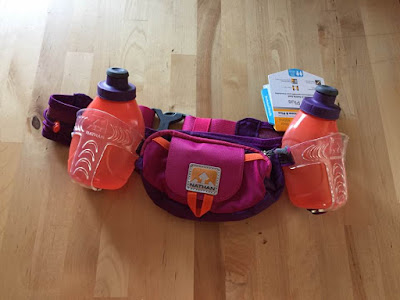 I tried it on and it fit great and the price wasn't too bad and I got 15% off because it was Boston Marathon day.  The guy thought I was new to running and was shocked that i had been running for nearly 4 years at the distances I have done without ever hydrating on a run.  I don't feel like I need it on my long training runs but I think it will help with my recovery after and possibly eliminate some potential migraines.  It has pull string thingy on the front near the buckle that I can add more water if it is necessary but I don't think it will be. 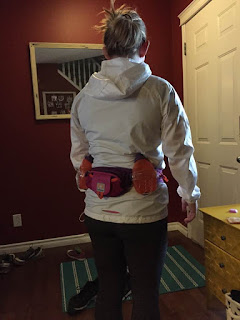 The first time I used it, I forgot to put water in it haha but I have used it on my longer runs and have drank some water.  I think I drank about 6 oz or something the first time and I haven't been keeping track since.  I need this more for when it is hot out because that is when I feel I need water the most.  And I have no plans in ever running a race with one of these on either.  I thought it would be really heavy with it on but I don't notice it really and I like wearing it instead of my flip belt which i really hate.

Do you use a hydration system while running?  What do you love or hate about it??

at May 04, 2017
Email ThisBlogThis!Share to TwitterShare to FacebookShare to Pinterest
Labels: Hydratioin, Running