Our weekend kicked off with our school's annual family dance.  It is a favourite for the kids as they get to dance and hang out in a fun environment with their friends. 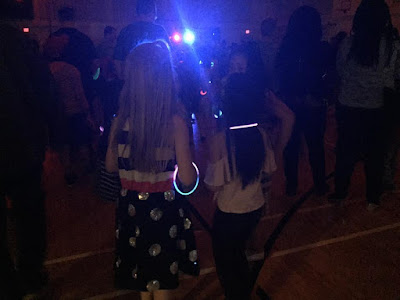 Finley and her friends were dancing all night long.  Penelope walked into the gym to dance when it was over and they were making the raffle draws.  She and her friends hung out in the hallway drinking pop and eating snacks instead.  They were pretty cute.  Greg won a one night stay at the Deerfoot Inn + Casino so that was pretty cool. 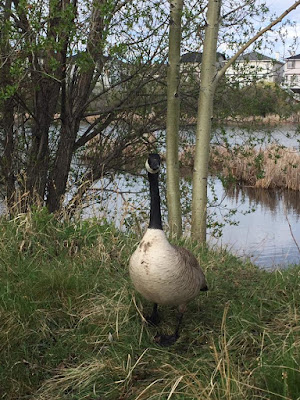 Saturday morning saw me up early so I could get a 5km in. I don't normally run on Saturdays but with it being Mother's Day tomorrow, I ran today.  My kids would be so mad if I got up before them and they couldn't make my breakfast in bed. 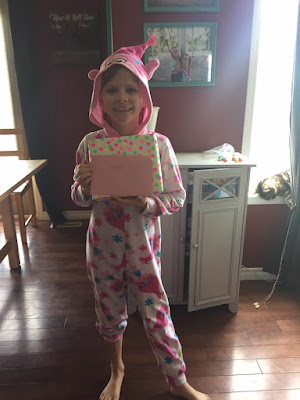 I got back from my run just as Finley was going to a pancake and pajamas birthday party.  This is the most brilliant idea and I hope Finley uses this for her next party.  They ate pancakes and bacon and fruit and drank pink lemonade and had so much fun.  Such a great fun idea for a birthday  party! 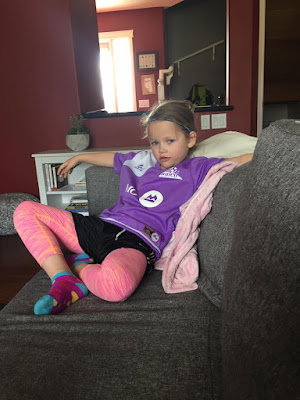 Penelope has tech training every Saturday at 1pm which really kinda sucks.  It really ruins any possible plans for a saturday and so we don't tend to do much.  Both girls had tech on saturdays all winter long but they were both done by noon so you had the rest of the day to do stuff.  After soccer, they went for blizzards at Dairy Queen followed by some grocery shopping. 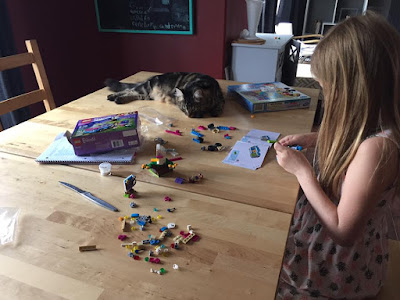 While Greg and Penelope were out, Finley and I had a coffee date followed by some lego building and playing and some bracelet making.  As you can see Pizza is a bad kitty who loves the kitchen table but in her defence, it is absolutely my fault because when she was a kitten and we had to feed her with a syringe, I sat her on the table because it was easier for me and I can seem to kill this bad habit of hers.  Nothing fazes her at all. 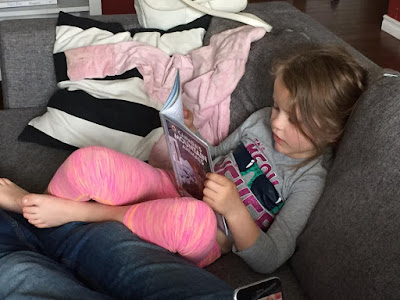 Penelope read us her library book on Saturday afternoon. It was all about mountain animals and she kept saying the cougars liked to eat monsters but it was marmots.  It made me lol.  Actually, I don't remember if it was a cougar or not, but some kind of animal haha. 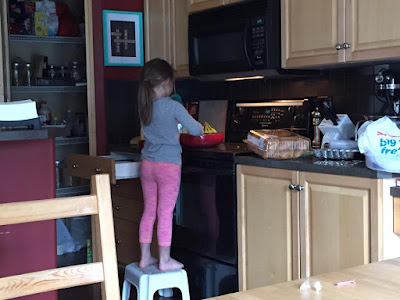 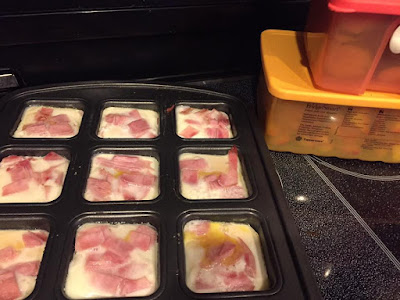 After supper, I did the things I usually do on Sundays that I wouldn't be able to since it was Mother's Day which is a day where I do nothing.  I made my breakfast for the week, prepped the fruit and veggies and made some apple cinnamon muffins which didn't turn out that great and some grain free chocolate zucchini muffins which have been a huge hit here.  Penelope  helped me clean up and she bagged all the croissants individually so that they were ready for lunches.  She is such a good little helper when she wants to be. 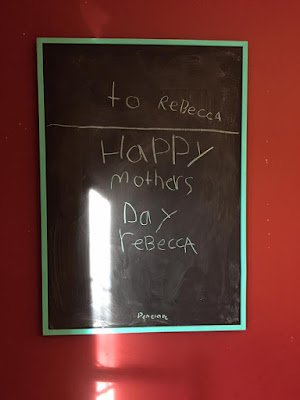 Also, on Saturday night, Penelope drew me this.  She also wrote me a letter that she addressed to Rebecca and not mom.  I know lots of people get offended when their kids call them by their first name but it cracks me up.  She learned how to spell Rebecca and just went for it.  She's cute and I appreciate it.  Greg went to some Canadaland podcast thingy at Sait and I went to bed and watched a few episodes of Family Feud and SNL - the Spicer skit was HILARIOUS!!!! 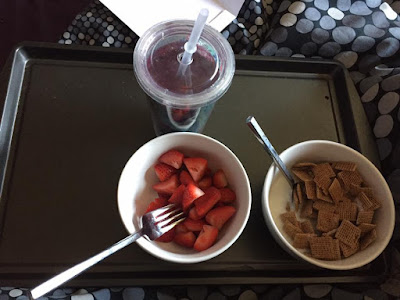 Sunday morning was hard because I am always the first person up and of course I was. So I threw on some headphones and listened to some podcasts while I pretended to be asleep and waited for the kids to get up and make me breakfast.  Breakfast was delicious and despite the fact that we know have an actual tray, they still insisted on using a cookie tray hahahah. 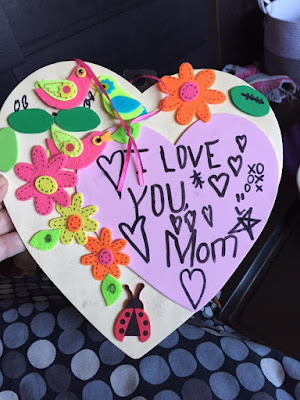 Next was time for Mother's Day gifts.  I love seeing all the great things they make at school.  They are always so cute and they are so freaking proud of what they made.  This one was from Finley.  She thinks I should  hang it in our bedroom but I think I will hang it in either my office area or in my workout area instead. 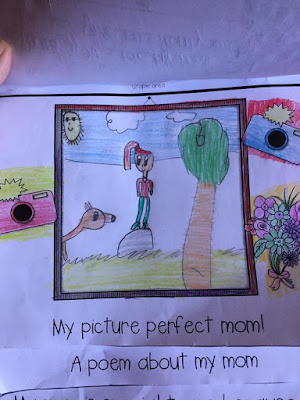 She also wrote a little booklet about me and this is the photo she drew and I absolutely love it.  I am hiking in the mountains with a deer checking me out.  I love all the thought that went into this. 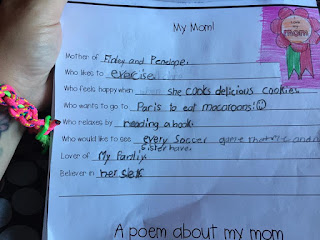 This made my heart so happy because her responses are so good and shows how much she pays attention without me even realizing. 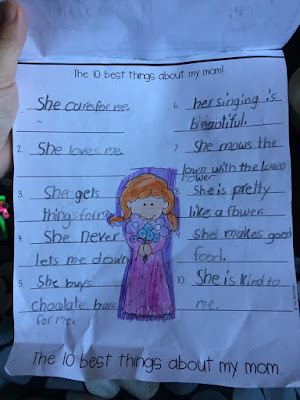 This one made me LOL big time because she says my singing is beautiful and she tells me that whenever I sing in the car too.  She's funny because trust me, my voice is far from beautiful but I am honoured that she thinks it is. 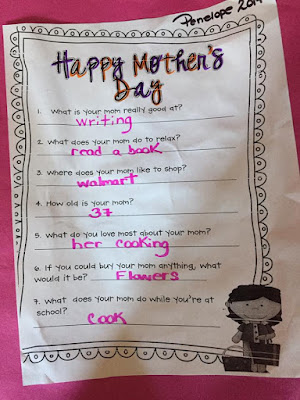 I was happy to see that Penelope got my age right this year.  Last year, she said I was 72 hahahaha.  And when Penelope says cook she really means bake and more specifically baking muffins and cookies. 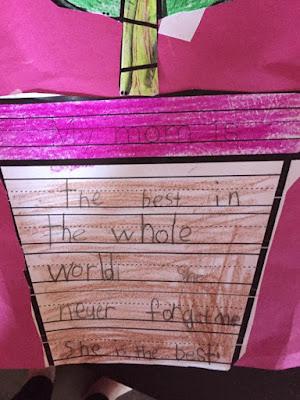 In the letter she wrote me, the journal they right in every year for me and on this she kept bringing up that I never forget her so it is clearly something that is bothering her and is very important to her.  I think it is because of the passing of both my Aunty Sandy and my Aunty Patsy that has her worried that I might forget her. 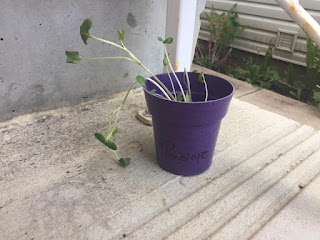 Penelope also painted this flower pot and planted some seeds to start the growing of some flowers.  I have no idea what kind they are and there is a very high probability that I might never know because I have a terrible track record with flowers.  And penelope knows this because she told me she would take care of it for me haha. 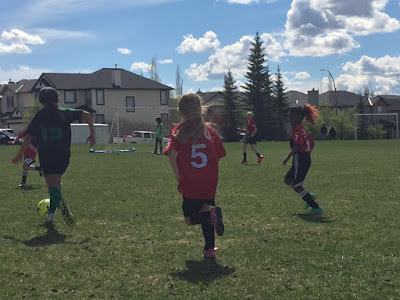 After breakfast and all my wonderful gifts, it was time to get ready and make the very long drive to Tuscany for Finley's soccer game.  The girls finally got a win and their record is now 1 - 1 - 2.  They have improved so much since their first game of the season and Finley has also improved tremendously.  I was seriously worried after the first game but she has worked hard to get in there.  She is getting more aggressive and is getting better at fighting for the ball.  The entire team played really well on Sunday and were very positionally sound especially when on defence.  They still bunch together on offence but we are getting there. 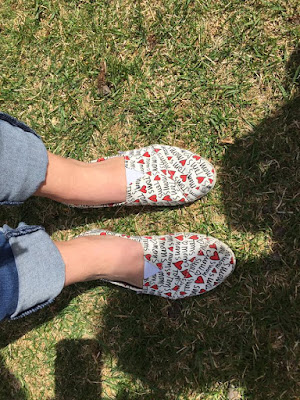 A Mother's Day tradition are my TOMS Mom shoes.  I love these shoes soooo much.  It is the only day of the year that I wear them and I don't care if they match my outfit or not (and they didn't). 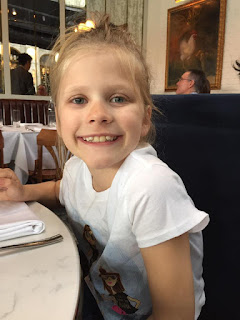 After soccer, we headed down to 17th for a late brunch at Royale Brasserie.  It was amazingly good.  It is in the old Corbeaux Bakehouse location and the even older Melrose location.  I will have a much more detailed blog post on this place on Thursday but it was serious perfection and we all left with full bellies. 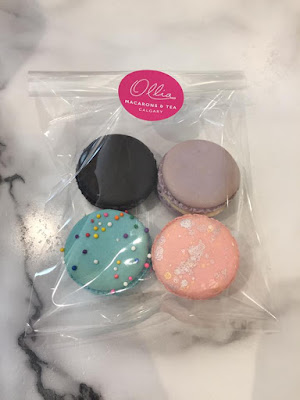 After brunch, we walked along 17th and stopped at by Ollies for some macaroons.  Finley got cookies and cream, I had lavender and honey, Penelope had cotton candy and Greg had raspberry champagne.  Finley hated all of the flavours, Penelope liked Finley's and Greg's and Greg and I liked them all but Finley's.  I loved Penelope's which surprised me since I don't like cotton candy but it was good.

After that, we headed back home where we all had naps hahaha before Greg and the girls made salad rolls for supper which is one of my favourite meals. 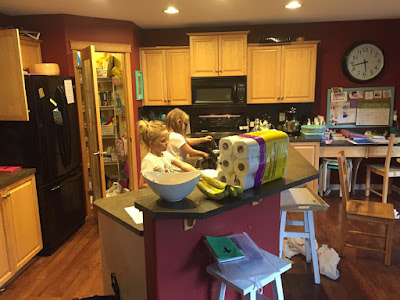 The girls did the dishes and put them all away for me before they both headed up for bath time and early bedtime since they were still tired for some reason.  Greg and I closed out the day with slurpees and the last 3 episodes of The Mick.  It was as close to perfect as a day can be. 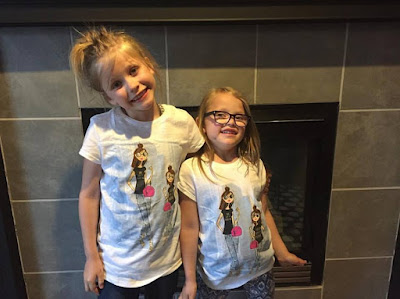 I know it is impossible to read what is on their shirts but they are mommy and daughter shirts.  The mom's shirt says "she got it from me" and the daughter's shirt says "i got it from my mama".  I love these shirts and I love these 2 and so grateful every single day no matter how tough that day may be that they chose me to be their mom.

at May 16, 2017
Email ThisBlogThis!Share to TwitterShare to FacebookShare to Pinterest
Labels: Mother's Day