Our weekend was a mix of busy and laid back and all 3 days contained some sort of soccer.  But it seems these days that all our days are full of soccer.  Friday started out with my bribing the kids to pick the dandelions and I would buy them a slurpee. 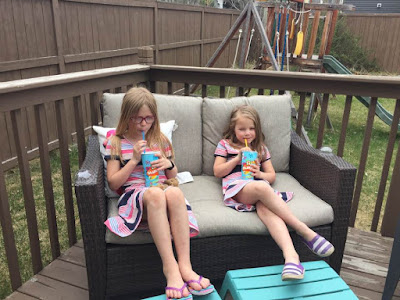 The bribing worked but seriously I could have offered them nothing and they would still pick the dandelions.  As long as they are not completely out of control, they quite enjoy picking them.  They are good kids that way.

Finley had tech training Friday night and the plan had been for Greg to take her but he rode his bike to work and the wind was really bad for him coming home and so it took longer then he anticipated so he didn't make it home in time so I had to take both kids.  Another mom brought her daughter who is a year younger then Penelope and they play really well together all the time so that worked out good.  They both had fidget spinners that light up and that kept them occupied for most of the 90 minutes.  It was windy and I was cold so that kinda sucked.  I did have plans to go out afterwards but I decided to suck and just stay home and go to bed early. 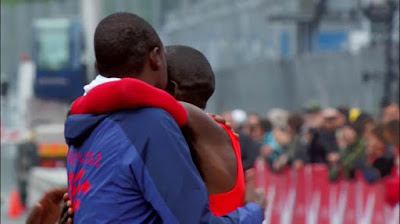 But as luck would have it, I received a tweet from Nike that they were attempting the #breaking2 at 945 local time - just as I was going to go to bed.  And of course, me being a runner, had to stay up to watch it.  I know there was a lot of criticism about NIKE over the event and many called it a 2 hour commercial for their shoes, but seriously, it was pretty freaking awesome.  He ran 2:41km and 8 consecutive sub 15 minute 5ks.  My PR for a half marathon is 2:21 so to me this is just mind-blowing.  He is unofficially the fastest man in the world having run the fastest marathon ever but it doesn't count due to several rule violations most notably all the pacers coming in and out blocking him from the wind.  I was so crushed for him when he crossed 25 seconds after the 2 hour mark but still what an amazing feat for him.  And for runners everywhere because now something once thought to be impossible is now probable and that in itself is pretty cool .

Once the marathon ended, Greg turned the tv back on to see the full on Edmonton collapse.  By this time, I was so ridiculously tired that I couldn't even fall asleep.  I had a terrible sleep and was up too early the following morning.

The next morning however, I was awake early but I stayed in bed until 10am and it was fantastic.  I have no idea when his happened last or when it will happen again so I enjoyed it.  Greg had taken the girls to the 1015am showing of Guardians of the Galaxy 2 so I was home alone. 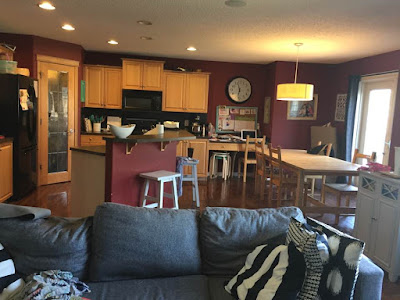 And after taking full advantage of being able to lay in bed and do nothing, I got up and cleaned the entire main floor.  I am glad I took a photo of this because by the time we went to bed later that night, it was not as clean.  Don't mind my desk, it is always a disaster except on Monday mornings as organizing it is on that day's to do list.  It also never lasts. 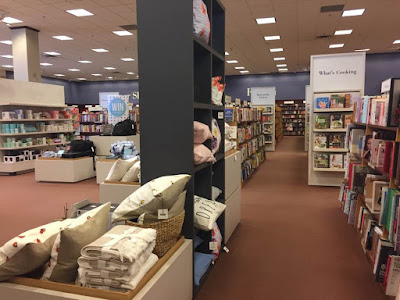 Greg and Penelope had to leave right from the theatre to get to her tech training in Woodbine so I went to Chapters for some starbucks and some wondering before the movie ended so i could pick up Finley.  Chapters is one of my favourite stores in the whole world. 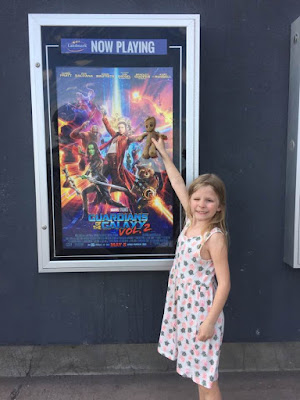 Finley wanted a photo with her groot covering the poster groot.  Finley absolutely loves Groot and I don't quite understand any of it.  She looks funny because it is sunny, she's not wearing her glasses and she has cried through much of the movie.  I don't believe that she has watched a movie and not cried in it slightly ever.  And this is not an exaggeration on my part either. 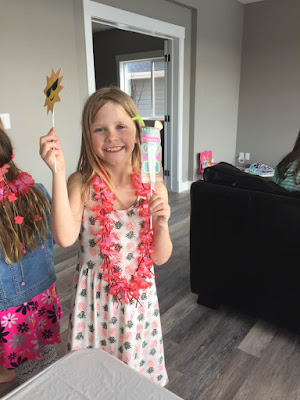 Finley and I ran a few errands before heading over to a birthday party for one of our favourite soon to be 8 year olds.  It was an hawaiian theme and everybody had so much fun! 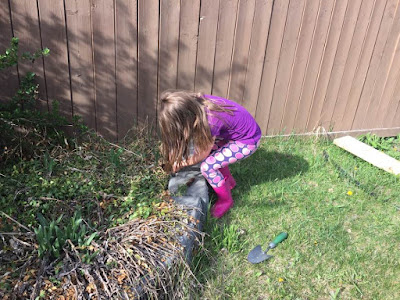 After supper on Saturday, Penelope was insisting on planting her tree that she received at school on Thursday.  Last year,  Finley's died in the bag and we tossed it and we were hoping for the same thing with this one but no such luck.  I have no idea how well she planted it or if it will survive but she was trying her hardest.  I almost caught her digging up my front yard which I would not have been happy about but I don't care much for the flower bed in the backyard.  It will be interesting to see what happens to it. 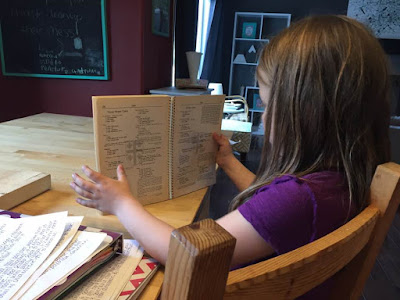 Penelope then helped me do some meal planning for the week by reading through one of my Aunty Sandy's cookbooks that I inherited.  She had so much fun reading and going through recipes.

Bed time came soon for these very tired kicks and I headed to bed with them and watched some tv in bed.  SNL was pretty good this weekend.

On Sunday, I was up too early and I was supposed to run but since it was a short run and I normally do those around our neighbourhood and the one to the right, I get bored easily so I decided to run later on my way to soccer.  So, I laid in bed for awhile before getting up with Penelope. 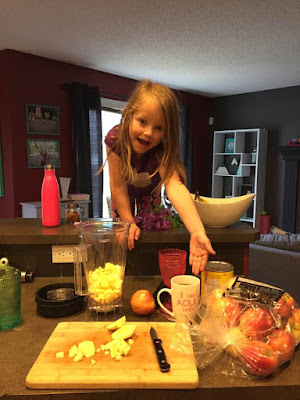 Penelope decided to sleep in her planting clothes which annoys me so much both kids seem to do it.  I don't get it!!!  She  helped me make some applesauce followed by some cinnamon apple sauce muffins.  I didn't like the muffins this week but everybody else seems to.

I finally woke Finley up around 10 - she likes her sleep and hates getting up for school in the morning.  She needed to get ready for her soccer game that started at 12.  But we need to be there 45 minutes early for game days.  I gave her 45 minutes to get ready and she still wasn't ready on time.  She gets mad when I make her get ready so early but this is why because no matter how much time I give her, I always have to wait. 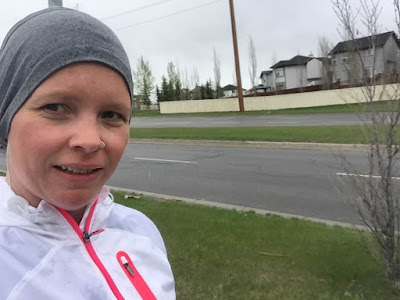 Just as we were all getting ready to leave, it started raining but luckily for me that as long as it is not a torrential downpour then I don't mind running in the rain.  It was windy though so it was cold.  By the time I got to the soccer fields, I was so wet and cold.  Thankfully I brought a sweatshirt to put on and another jacket that was nice and warm and dry.  I ran so good and I was really surprised by this.  I feel like I have struggled a lot with my runs but I felt so good and I was relatively fast too which is always a nice bonus.  No idea what happened but I hope it continues. 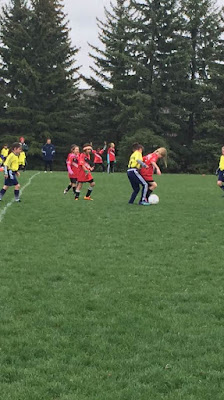 Finley had a really good game on Sunday.  This is their third outdoor game and she has come a long way since her first game and still has a ways to go but she doing really well.  They still haven't won a game - they tied twice and lost one but I can feel a win coming soon.  Apparently it was raining pretty hard while they were warming up so Greg went back home and grabbed our camping tarp so the girls would stay dry when they weren't playing.  We also had big blankets for them too.  It was so cold.  It was a good thing we were just playing in Millrise today and not Tuscany or Stratcona like we do some weeks.  Greg's dad surprised the girls and came to watch and they really enjoyed that.  He treated us to hot chocolate at Second Cup afterwards since the girls and me were so cold.  Let's face it, everybody was cold!

Once we got home, we all had nice hot baths to warm up.  Both kids did their home reading for the weekend and Penelope went out to pick all the dandelions in the backyard since it had quit raining.  The girls then watched a movie and I had a nap since i was tired and still kinda cold. 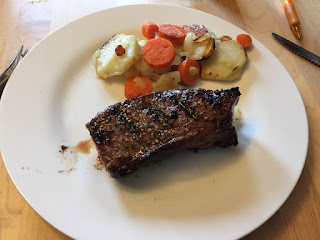 Greg made steak with potatoes and carrots on the barbecue for supper and it was really good.  My Aunty Sandy always made the best bbq potatoes and carrots but Greg has gotten better over the last nearly 16 years of trying.  I cleaned up the supper dishes while Greg and the girls watched an episode of MasterChef Junior.  Finley's favourite was in the bottom but she survived.  I expect full on tears if she gets eliminated and doesn't win.

As I type this I am anxiously awaiting for them to go to bed but in the meantime, I am going to read some more of the Handmaid's Tale with some Earl Grey Lavendar before bed.  It was a good weekend around here but I have a busy week ahead so I need all the rest I can get haha. Hope you all had a great weekend!

at May 08, 2017
Email ThisBlogThis!Share to TwitterShare to FacebookShare to Pinterest
Labels: Weekend Recap