Our Friday evening started like it always does - a quick supper and one of us taking Finley to soccer and that Friday was Greg's turn.  Penelope and I stayed home and she played some iPad games and I caught up on the previous nights MasterChef,  it was finally through the auditions and was now doing real competitions which is what i like.  The auditions bore me. 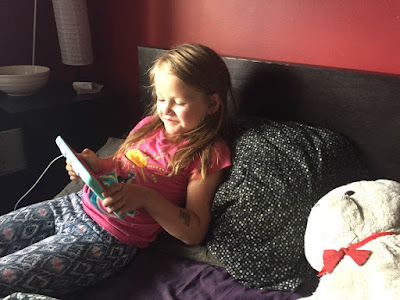 After Greg and Finley got home from soccer, the girls had a sleepover in Penelope's room and were relatively well  behaved.  Greg and I watched some celebrity family feud before I fell asleep relatively early.  For some reason, this week had severely kicked my butt and I was exhausted. 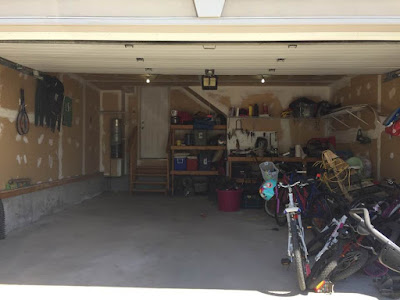 On Saturday, we all slept in - relatively speaking.  I got up and mowed the front and back lawns and my neighbours front lawn and then I decided to clean out my garage.  It hadn't been done since last spring and it was in a desperate need of a good sweep.  I got rid of our broken lawn mower for free on kijiji and organized our recycled bottles properly.  I should have sold Penelope's old bike too but I didn't feel like lugging it out to photograph it so it will probably stay like that until next year.  While I was cleaning out the garage, Greg and the girls went to the school to work on some soccer drills before Greg and Penelope went to her tech training. 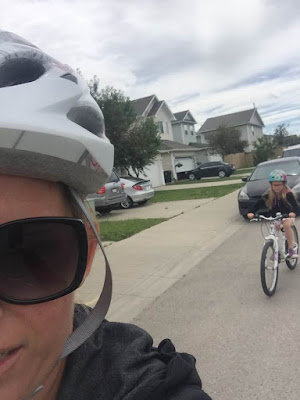 Greg's car is not working at the moment, and probably never will, so while he had my vehicle, Finley and I had to ride our bikes to a birthday party she was going to in the community beside us.  It was a girl on her soccer team who was having a birthday party just for her soccer friends and it was for 5 hours.  The did go to Shakers for most of it, but that is still a long party.  It was great for me because I had the whole afternoon to myself! 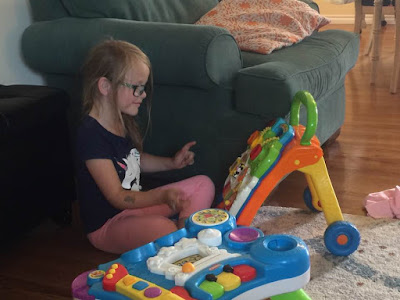 After tech training, Greg and Penelope went to their frousin's 1st birthday party and Penelope had so much fun playing with all of H's toys.  Finley was gutted when she found out that the party she had been invited to was on the same day and was conflicted on which party to attend.  We are happy that H had a great birthday party! 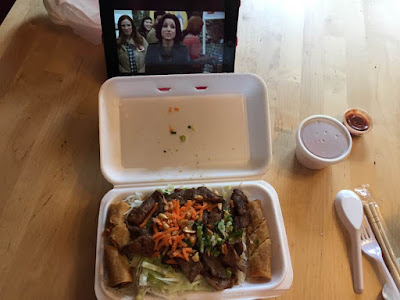 Since I hate cooking generally, I especially hate cooking for one so I went onto Skip The Dishes and found me some Vietnamese for supper.  It was delicious and hit the spot.  If you haven't used skip the dishes before, I recommend it because it is amazing.  We use it all the time.  Well not all the time - but usually whenever we get take out or delivery. 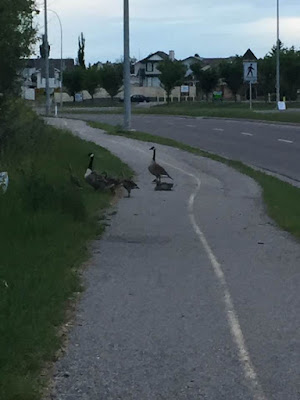 Sunday morning was Father's Day which meant I had to get up early to get my run in and it wasn't a great run overall but I got it in and that is what's important.  I run by this geese family 1 - 3 times per week and they still hiss at me when I approach.  I love getting to see how big the baby geese are each time I see them. 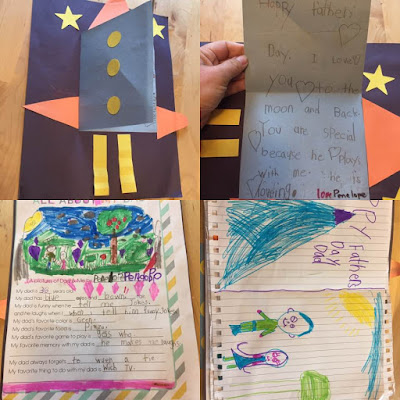 Here are the Father's Day things Penelope made for Greg.  All but the bottom right were made at school.  She made about 5 other ones too but I couldn't get them all in hahah. 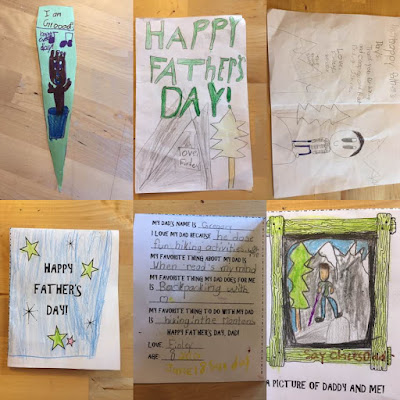 These are Finley's Father's Day Creations.  I think all but the top left and right were made at school.  In case you didn't notice, she loves that he takes her hiking and camping haha. 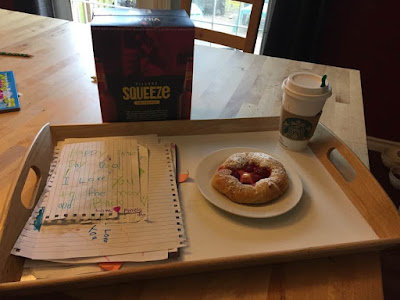 Father's Day tradition in this house is always a case of local craft beer and it is almost always Village since that is Greg's favourite.  And we get him a danish from Cobs and a Grande Flat White from Starbucks.  We then serve him breakfast in bed with all of his goodies.  Normally we try to let him sleep in a little bit on this day but unfortunately, Finley had a soccer game in Strathcona which is a 45 minute drive on a Sunday morning from our house and it was at 10am so he had to get up earlier then he would have liked. 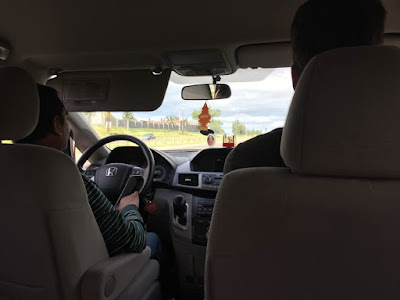 One of the girls on Finley's team lives in the community over from us and her dad works up north most of the time and her mom tutors at night so we take her to most of the games, practices and tech trainings with us.  It literally adds on 2 minutes to our commute so it is like nothing at all.  But he was in town and suggested we car pool.  This was like an extra father's day present since it meant Greg didn't have to drive.  Finley's team was winning 1-0 after the first half but ended up losing but in their defence, they were down 6 players due to absence or injury by the end of the game and they played very well and didn't give up until the game ended. 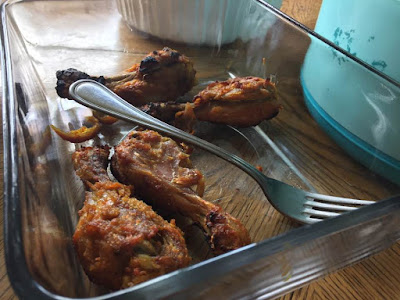 After soccer, we came home and changed and then went to the home of the girl we drive to soccer as they wanted to make us lunch for helping them out.  We had originally had brunch plans at Provision but I cancelled them so we could attend.  I won't lie, I was terrified of going because I don't like spicy food and I am super picky but I actually really liked it.  My favourite dish was the tandoori chicken which is above.  I found it (and most everything else) super spicy but the flavours were so good.  They were laughing at me because they thought everything was no spice at all but yet I found it spicy.  Finley really liked it as well while Penelope only liked the naan that was made from scratch.  I also learned that in Southern India, they use their hands to eat and not utensils.  Greg joined in on this tradition but I did not.  It is amazing how efficient they are at cleaning off their plate with their hands especially since lots of food is very saucy.  I have learned a lot about their culture from driving their daughter all the time and it's been a great experience for us all. 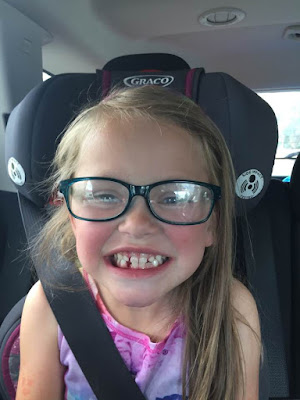 After lunch, we were taking Greg for ice cream when Penelope pulled out her tooth.  She was so excited to have lost her 4th tooth. 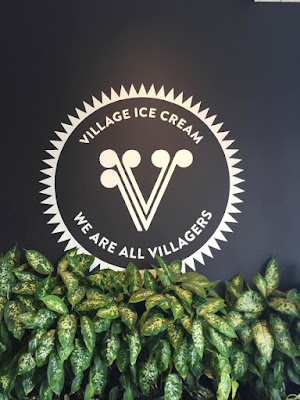 Village Ice Cream has root beer as their seasonal right now and that is Greg's favourite.  So I said we would go there after we had lunch.  We first went to the Britannia location but they were sold out so Greg insisted we leave and we headed to the East Village location where they were also sold out so he disappointedly settled for coffee, which he still quite enjoyed.  He didn't realize there was a 3rd location in Marda Loop until we driving home later that night from his dad's and he made me call them to see if they had root beer left since it was on the way home and they did! However, when we got there, the line up was insane and he didn't want to wait that long for more ice cream  - especially since he had ice cream at lunch, at village and a ice cream sandwich at his dad's haha. 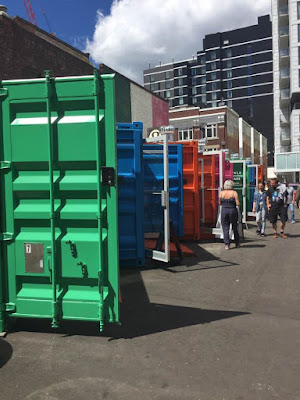 Right now until the end of summer, the East Village has what they call the East Village Junction set up where they have food trucks and a stage for local performers and then stores in little shipping containers.  Lululemon has one and they offer free water for runners and host long runs out of there on Sunday mornings at 930am if you are interested.  They also had More Than Miles Swiftly Racerbacks, which I desperately wanted, but they only had size 12 and that is quite too big for me.  The guy who was working was not very helpful and I have no idea if they are getting more in or not.  He didn't even acknowledge us when we came in or left or anything.  Very disappointing experience. But other then that, it was a really cool thing to have going on.  They are allowed to serve alcohol one weekend per month as per the ALGA rules.  This is something they could do in Kensington and on 17th too and it could be quite successful.   Check it out if you are downtown Thursday - Sunday this summer! 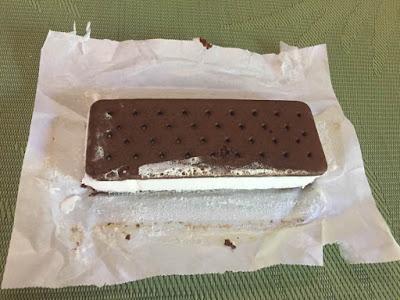 After our East Village excursion, we headed to Greg's dad's house for supper.  We had lamb and ham and corn on the cob and raw veggies and dip and a tossed salad with ice cream sandwiches for dessert.  It was delicious and it was nice for Greg to celebrate Father's Day with his dad.

It was a busy weekend as it is most weekends but a very good one at that.  Hope everybody had a great weekend and Father's Day!
at June 20, 2017
Email ThisBlogThis!Share to TwitterShare to FacebookShare to Pinterest
Labels: East Village, Father's Day, Lululemon, Weekend Recap