What I Streamed In May

Thanks to my lack of stretching, strengthening, tread milling and working out plus NHL + NBA playoffs on TV (or I stream on my iPad since we don't have tv's on our main floor)  I haven't really watched much but really it was a full season each of 2 shows.  Here they are: 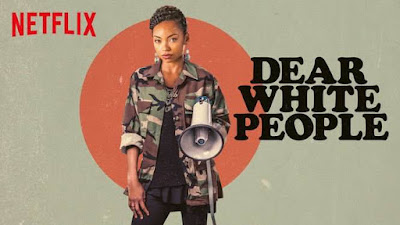 So I had heard about this show on Facebook when it was like the first thing in probably a long time that got 100% on Rotten Tomatoes so I had to check it out and it was fantastic.  My favourite thing was that each episode was from the perspective of a different character on the show.  I liked to see that especially given the nature of the show and the issues they touched on.  When I was googling it to find a photo to use for this blog, I noticed it had a Wikipedia page so I checked it out.  I never heard this, but the initial TV show trailer was controversial because some people were saying that it was racist to white people and they wanted people were boycotting it.  This clearly did not stick.   The Netflix series is based off a movie from 2014 that I also did not know or even had heard of.  The same guy behind the movie is also behind the series.  This isn't a show that you can put on your iPad and then clean up or do whatever, you really have to listen and pay attention.  This show is fantastic and I really recommend you check it out. I think there are 10 - 12 episodes and it is available to stream right now Netflix + Netflix Canada. 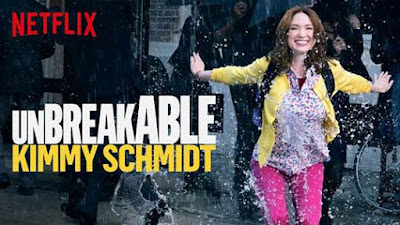 The third season of Kimmy Schmidt was also released on Netflix this month and I binge watched it in one day while the girls went hiking with Greg and while I really enjoyed it, I didn't think it was as good as previous seasons.  That being said, I love the random references to pop culture and the overall ridiculousness of it and the random pop ups of various SNL and other comedians in it.  It is great to watch  while doing other things.  There are 13 episodes and it is currently streaming on Netflix + Netflix Canada.