Last week, the girls soccer was cancelled because of the rain so we decided to head down to the Stampede grounds as it was $5 entry from 5-7pm. 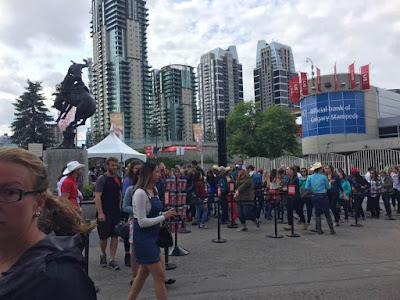 The lines were long but once you got through the bag check, it went quite quickly and we discovered that once we got to the entrance that Penelope was free since she was 6.  She hates when she gets in anywhere for free because it makes her feel little. 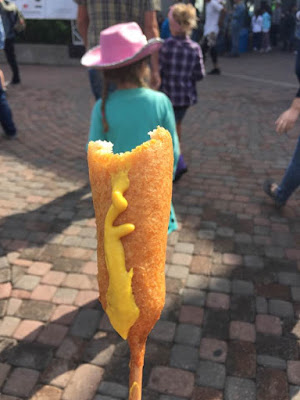 Once we got into the grounds, our first stop was the corn dogs.  That is mine and Finley's Stampede favourite.  Penelope also had a corn dog.  The girls eat theirs plain and I have mustard on mine. 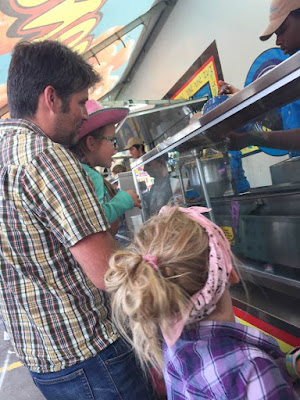 Our next stop was at the mini donuts truck.  There are several different mini donut vendors at Stampede but Greg only eats at one in particular.  It is located close to the grand stand entrance if you are wondering.  I cannot remember the name of it off hand.  We get ours with the icing sugar and they are so incredibly delicious despite being so incredibly unhealthy for you. 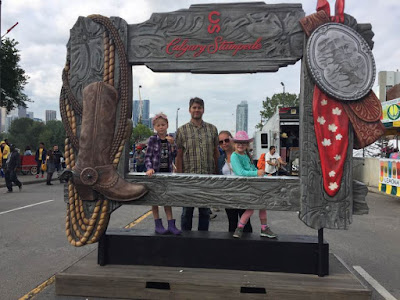 We found this photo op by accident and someone offered to take a photo of us.  Penelope kept creeping in front of me so it was kinda awkward haha. 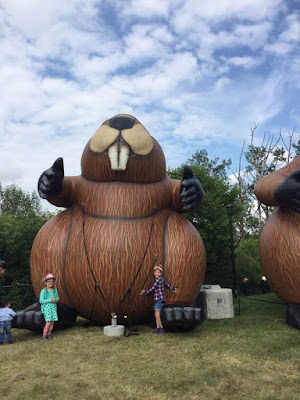 They had a Canadian area where the Indian Village used to be and it was super lame but the girls enjoyed the inflatable beaver.  The rest of the Canadian area consisted of various inflatable hockey activities.  It was a super lazy and lame attempt of a Canadian themed area.  Very disappointing. 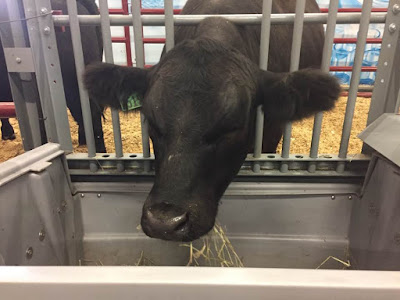 The majority of our time at the Stampede was spent at the Western Agrium Building.  I loved this photo of the black angus cow eating some hay.  Black Angus cows are my favourite kind of cows. 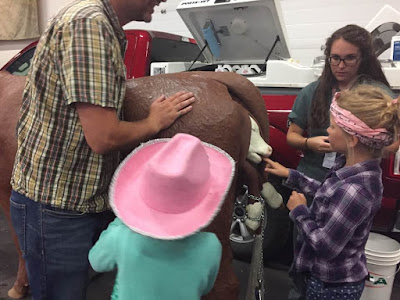 Next, the girls got to see the inside of a cow's stomach and how it looked when it gave birth.  I was kinda creeped out by the visual aspect of a cow giving birth but neither kid was bothered by it. 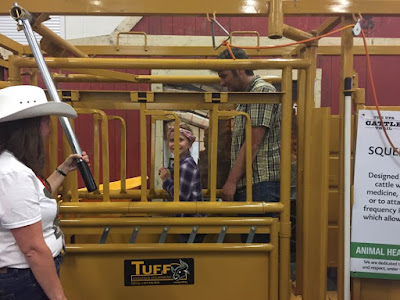 Finley and Greg got squeezed just like cows do when they are getting tagged, getting medications or vaccinations.  Penelope walked through it with me but she lost her mind when I asked to be squeezed.  She was having no part of that. 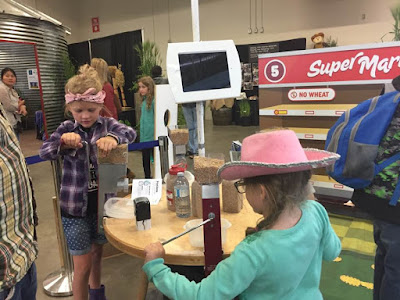 Next, they girls went through the 5 stages of wheat.  The highlight was turning the seeds into flour and then playing with the dough that was made from the flour. I also enjoyed turning the wheat into flour. 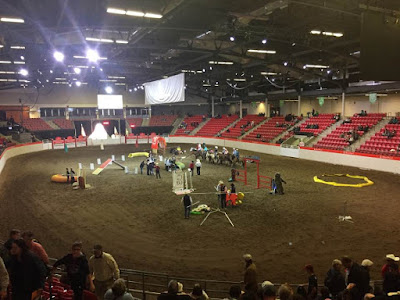 Upstairs at the rodeo ring, we watched some dogs and horses jump around.  It was at the very end of it so we didn't see a whole lot of it. 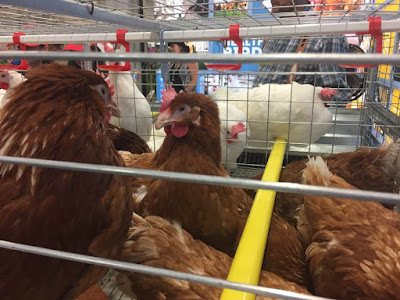 The chickens were pretty cool and there was feed that you could feed to them.  Finley tried and got a few pecks, I picked some up but was too afraid of getting pecked hahaha so I dropped it back into the bin.  We also some baby chicks that were all cuddled together because they were cold and we saw some 10 day old piglets and their mama in the maternity bin. 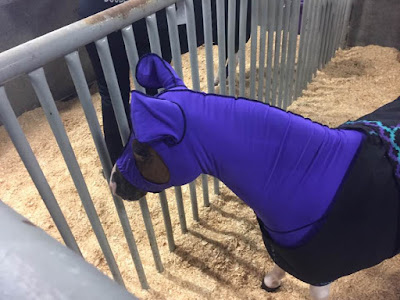 We walked through the barns to look at the horses.  We came across some mini horses that had the spandex layer on under neath the usual horse jackets and we asked why they are wearing the layers and it is basically a housecoat so they don't get dirty again after their bath and it helps them keep warm.  But mainly, it is to keep them clean. 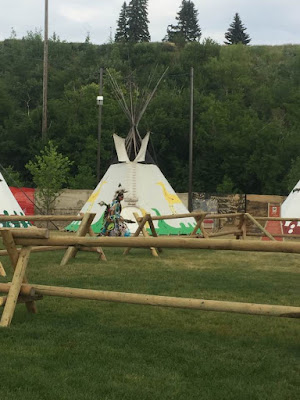 We made it to Indian Village which is one of my favourite places at the Stampede.  A year ago, they opened the new area for it and it is so much nicer.  It is wayyyyy bigger and no longer is everybody all cramped into a tiny little area.  I really wanted bannock but the line up was crazy long and wasn't moving very fast so we skipped it sadly.  There were also some dancers but we couldn't see them because the crowds were too  large but we were able to hear it. 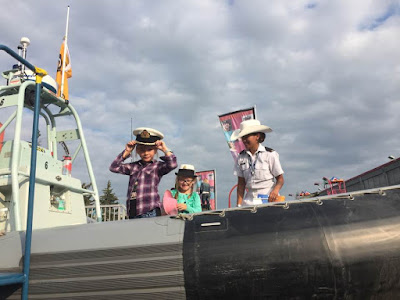 The military had tanks and boats set up for you to go into and look around.  We tried 2 different times to go to the tank but the line up was crazy both times.  The girls went onto the boat and they liked it and they loved trying on the hats too and pretending to drive the boat. 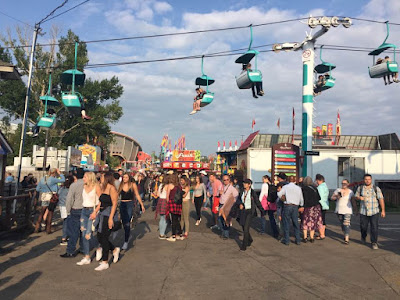 Despite $5 entry night, the grounds weren't too busy at all. 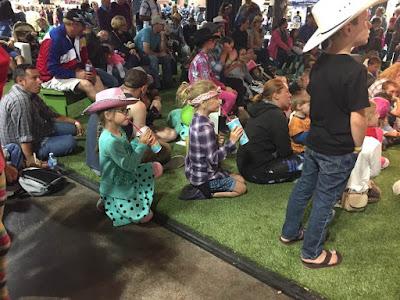 We moved into the BMO Center for the indoor market and the girls watched Safari Jeff.  I watched the turtle but then he came back out with a gigantic snake and I was outta there.  I walked around the booths until the show was over and greg and the girls were ready to move on. 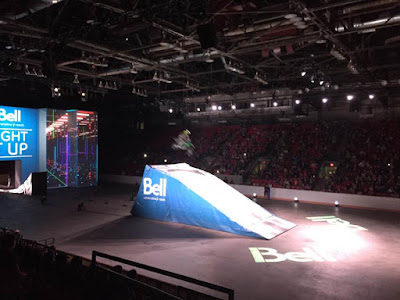 We went to watch the Bell Light It Up Adrenaline Ranch and it was pretty cool.  It lasts about 20 minutes long and Finley loved every second of it.  Her reaction to most of the jumps was more impressive then the jumps herself.  Penelope didn't love it that much.  My favourite was when they used the snowmobile to jump.  That was awesome. 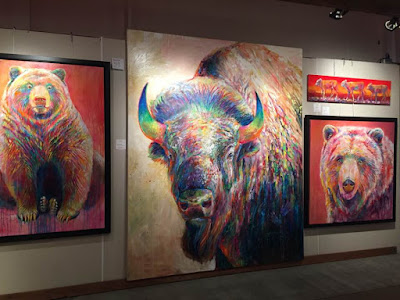 We went into the Western Oasis to look at all the art and cakes that are entered into contests.  I can't remember her first name, but her last name is Ford and her work was my favourite out of all it.  If I could, I would buy them all haha.  Both girls really liked this too.  The cakes were really cool this year and Penelope's mind was blown when we told that it was made of of cake and fondant. 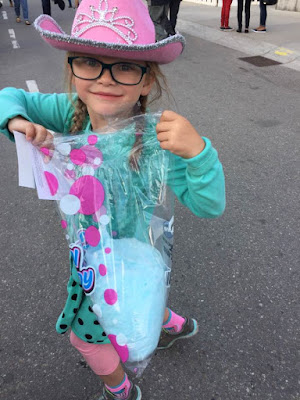 Penelope's favourite stampede treat is cotton candy.  She asked from the moment we got in every 5 minutes until we finally told her it was cotton candy time. 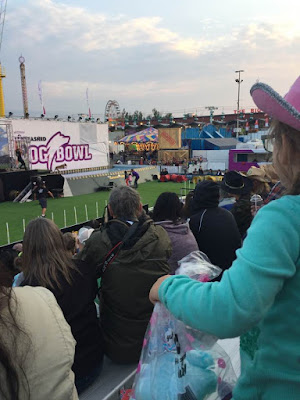 Penelope has been obsessed with puppies lately and desperately wants one so she was pretty pumped to watch the Puppies in the dog bowl.  Her reaction to the dogs was pretty close to what Finley looked like watching the motorbikes jump. 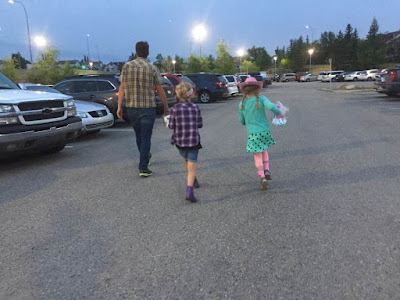 We left the grounds around 930 having spent about 4 and a half hours there.  We got in over 15,000 steps and ate lots of good food and some blah food but overall it was an ok time.  I don't think I would ever pay full price to go but getting in for $5 is very enticing.  We hadn't been in 2 or 3 years and while I don't know if we will be back next year but we will be back again one year.
at July 17, 2017
Email ThisBlogThis!Share to TwitterShare to FacebookShare to Pinterest
Labels: Calgary, Calgary Stampede, Explore Calgary, Explore YYC, Summer 17, Summer Bucket List, YYC